Empowering vulnerable people across central Tanzania economically, socially, physically and spiritually through Tearfund’s partner, the Anglican Church of Tanzania. We believe church leaders and the influence they have on their congregations and communities are the keys to winning the fight against climate change and poverty. Tearfund’s CCT process outlines how churches can help their communities to address the physical needs, negative attitudes and unfair relationships that keep people in poverty.

At your most vulnerable

Evita lives with her three children in the rural village of Kinangali, in the Manyoni district. It’s the hottest, most arid and impoverished region of Tanzania. The severe conditions have robbed people of their self-worth and instilled an attitude of intense dependency. Poverty is widespread.

At 68 years old, Evita wanted to be able to contribute meaningfully to the household income and have some independence. However, the way she was perceived by those around her undermined her sense of resilience and self-worth. For many people like Evita, the most debilitating part of having a disability is the way they are viewed and treated by society.

When she was just 27, Evita had to have her right leg amputated after a life-threatening cow kick. She recalls, “I was really devastated and unable to sleep for a whole week when I was told that my leg was going to be cut off.” Evita was fitted with an artificial leg by a catholic mission and although it took a long time to accept and adjust to this new life, she gradually got used to it.

A few years later Evita’s husband, unable to cope with the financial stress they were under, abandoned his family. Left to shoulder the burden alone, Evita says, “It was such a dark moment again because life became more difficult and my future was doomed due to numerous challenges in a family in maintaining our household.” External factors like rainfall shortages and soil infertility determined how much food the family would harvest, their only source of income.

People with disabilities are among the poorest of the poor worldwide. Women are particularly vulnerable because they are discriminated against doubly as a result of their gender. For many people like Evita, there doesn’t seem to be any way to overcome the significant challenges facing them, especially if the wider community treats them as less capable and less important because of their poverty or disability.

A helping hand where it’s most needed

Together with the Anglican Church of Tanzania (ACT), Tearfund is equipping the local church to create flourishing and resilient communities by reminding the most vulnerable people of their God-given potential and equipping them with the skills to transform their communities.

In recent years, The Anglican Diocese of Rift Valley has been working with 15 communities in Manyoni to improve household income through Self Help Groups (SHGs).

Self Help Groups: economic empowerment for the poorest of the poor
Each SHG has 15-20 members who come together each week, supporting each other financially and with mutual encouragement. They begin by saving small amounts which are used as loans to start new businesses, as well as funding costs such as school fees and health bills. More than that, through facilitation and training, members are empowered to think differently about themselves and their situation.

Church and Community Transformation: transforming mindsets and skills training
Until communities realise their own potential to address the needs around them, they will always be shackled by dependency. The Church and Community Transformation (CCT) process empowers communities to analyse, identify and address their own needs in order to find long-term, sustainable solutions to the challenges facing them. Addressing root causes enables long-term change and security, so the impact is lasting and maintained.

Monitoring, evaluation and learning: ensuring quality and sustainability
Community facilitators will help develop the monitoring and evaluation tools and receive training on how to use them. Participatory learning will allow groups to share experiences, best practice, and lessons from their experiences allowing the communities themselves to continue tracking how they are reaching their goals for transformation.

When the first Self Help Groups were started in Kinangali, Evita was interested but didn’t consider the opportunity seriously until she heard that older people and people living with disabilities were being prioritised so they could generate an income and meet their basic needs.

Salt mining, agriculture and livestock rearing are the main ways people earn an income in the area. A few months after joining, Evita used a loan from her SHG to start a business selling salt at the biweekly market (pictured right, courtesy of ACT). Earning an income has made a big difference in Evita’s life, but one of the biggest impacts has been the support and friendship she has found in her SHG. 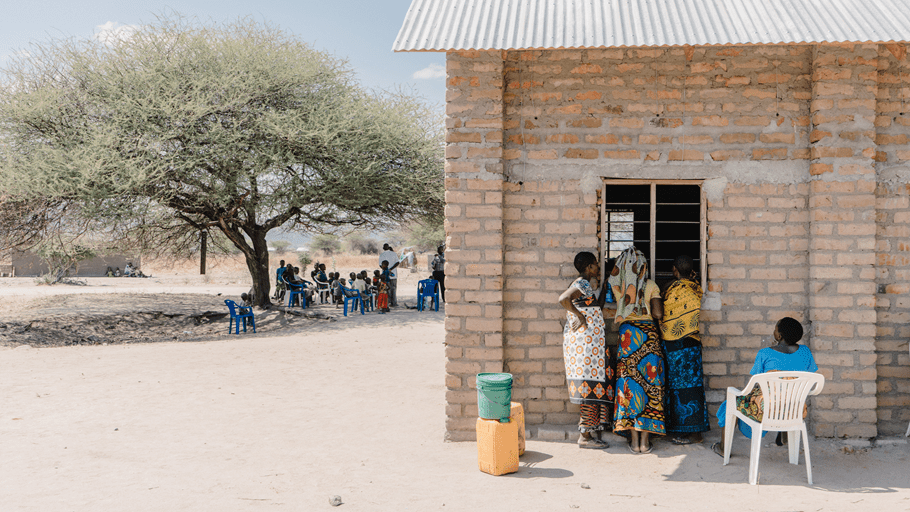 Each SHG also has a social fund, which members can make contributions to, as a kind of interest-free safety net for a rainy day. Evita was overwhelmed when her group decided to contribute some of these funds towards purchasing a new artificial leg for her, as the one she had been using for 40 years had worn out. Evita said this was a turning point for her, “The joy, support and social acceptance I found from my fellow Self Help Group members really brought back new hope in my life. It is changing my life and shows that disability is not inability.” Evita’s life is happier and things are improving.

A note on coronavirus

COVID-19 is still having a huge impact and has affected our partners' work across the world. We are hoping to implement this work as planned but would ask for your patience and understanding if future restrictions affect some of the activities.

He raises the poor from the dust and lifts the needy from the ash heap; he seats them with princes and has them inherit a throne of honour. (1 Samuel 2:8)

We'd love to chat with you more about this opportunity. Please get in touch!