Meet Tearfund’s Chief Executive, our Executive Team, and our volunteer Board of Trustee Directors 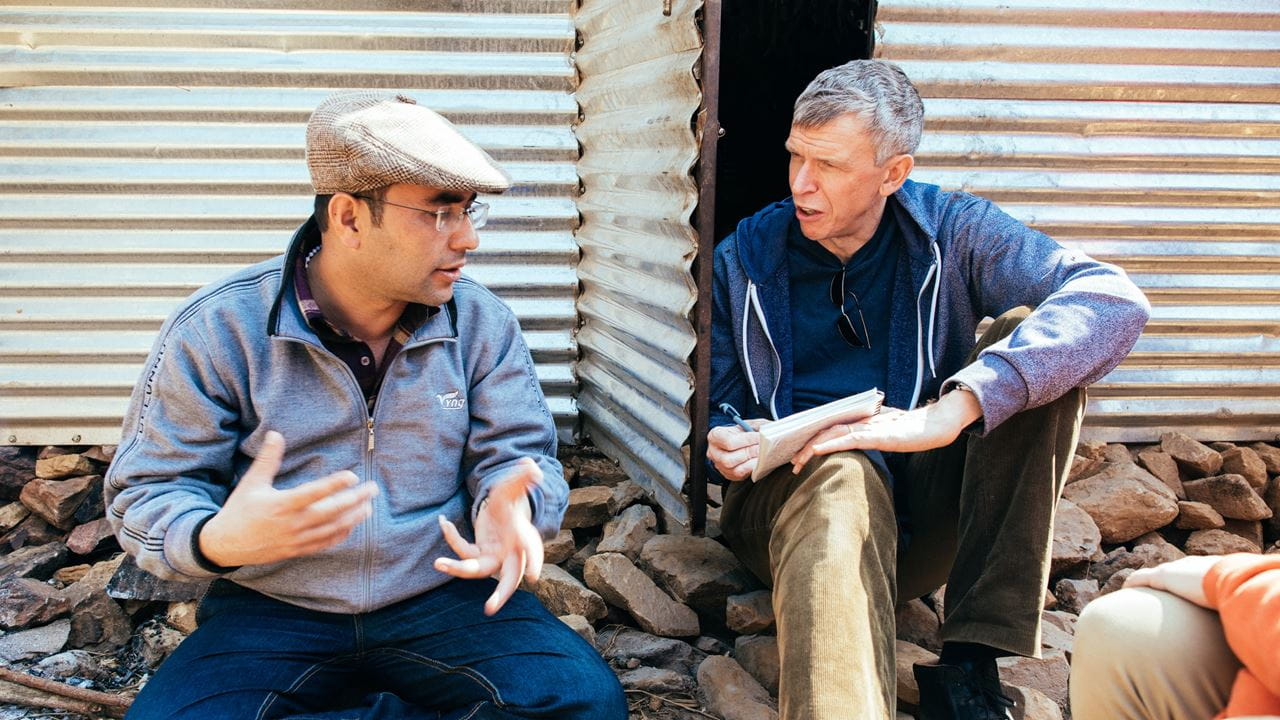 These are a small group of high-profile supporters who use their platform to raise awareness of Tearfund’s work. Our Ambassadors commit to helping us achieve our goals by supporting campaigns, fundraising and events.

These are Tearfund’s most senior staff members who provide strategic and operational leadership. They set goals, develop our strategy and ensure it is executed effectively.

Nigel became Tearfund’s chief executive in November 2015. Previously, he was chief executive of Farm Africa, a rural development NGO focused on east Africa. Before that he was chief of staff at Save the Children UK. Nigel is married to Teresa and they have two children. He is an active member of St Michael's Church, Southfields in London.

Bringing her experience of developing fundraising and communications strategies, Jane is responsible for raising the income that enables Tearfund to work with churches and partners in poor communities around the world. Before joining Tearfund, Jane led fundraising teams at charities including World Vision, Oxfam and United Bible Societies. She lives in Somerset and enjoys worshipping at Bath Abbey.

Veena has worked for Tearfund for over 20 years. Veena is from India and worked in the HIV sector there prior to joining Tearfund. She was leading Tearfund's work in Asia before becoming the head of Tearfund’s International Group in 2021. Veena is married to Gavan and they have two sons. They are members of the Corrymeela community in Ireland.

Ruth’s group mobilises churches around the world to tackle poverty and injustice by pushing for change at a governmental and institutional level. She was previously Churches and Theology Director at A Rocha UK. An in-demand speaker and author, Ruth lives in Chichester with her family and is a member of Revelation Church.

Director of People and Talent

Joining Tearfund in February 2017, Karen’s role includes oversight across HR, talent management and learning and development. Karen spent the majority of her career at PWC, the professional services firm, and has also worked at HSBC plc and Prudential plc. Karen is married to Andrew and worships at Neighbourhood Church, Beckenham.

Director of Strategy and Impact

Catriona previously headed up the Impact and Effectiveness Team at Tearfund. Before this, she was a consultant in the social enterprise sector, providing advice to UK and international clients. She has also worked for World Vision on strategy and development programmes. Catriona and her husband worship at Trinity Church in Lewes.

Previously, Nigel was Director of Financial Governance with Save the Children International. For some of 2017 he was based in Dakar, Senegal. Nigel has also had financial and commercial leadership roles within an international energy company. He is married to Claudine, has three children and attends St Nicholas' Church in Sevenoaks.

Board Of Trustee Directors

Tearfund relies on the counsel of our board members, who come from a range of backgrounds and share our passion for seeing people released from material and spiritual poverty wherever we work.

Chair of the Board

For more than fourteen years, Anna was a civil servant in the Department for International Development and the Foreign and Commonwealth Office, including posts in Zimbabwe and Mozambique. She is married to David, they have six children. They worship at Christ Church, Cheltenham, where Anna also holds the role of Team Leader for Youth and Children’s Work.

Honorary Treasurer and Chair of the Audit, Risk and Finance Committee

Antony has spent 35 years in international finance, mainly with Toyota, Amersham and GUS.  A Chartered Accountant and Corporate Treasurer, he is currently Director of Corporate Finance at Experian, and a trustee of two of their pension schemes.  He has been a trustee and treasurer of The Stewards’ Trust and is currently trustee and chair of the Finance & Investment Committee at Stewardship.  Antony and his wife Caragh have previously lived in the Netherlands and Ireland, and are active in their parish church in Hazlemere, Buckinghamshire.

Chair of the Safeguarding Committee

Stephanie is a partner in the charity and social enterprise team at Bates Wells, one of the leading law firms in the UK advising NGOs. She has extensive experience as a charity trustee, having served on the boards of a range of organisations, from small start-ups to larger Christian charities and mission agencies, such as Stewardship and OMF International (UK).

Chair of the Theology Committee

Jayakumar is well known for his 30-year involvement with World Vision. He was National Director for World Vision India for eleven years, before becoming World Vision's global Partnership Leader for Faith and Development from 2015 to 2017. He is the author of the book God of the Empty-handed and many articles related to poverty, urban missions, powerlessness, leadership and integrity. He has also taught in a number of theological seminaries. Jayakumar and his wife Vidhya are based in Chennai (India) and worship in Emmanuel Methodist Church.

John has more than 30 years of practice in international corporate and commercial law, including 15 years as a partner in Hogan Lovells, and ten years as a member of the group executive committee of SABMiller plc. John is currently Chair of The MacDaibhidh Charitable Trust and a trustee of the Tisbury Telegraph Trust. He and his wife have been financial supporters of Tearfund for more than 30 years. Since January 2020, John has also been a trustee of Tearfund USA, a member of the Tearfund family.

Catherine is a pastor with the Elim Pentecostal movement; her ministry over the last 15 years has involved church leadership and the charity sector. Catherine and her husband Dominic are the Senior Leaders of City Church Cardiff, a multi-generational and multi-ethnic Pentecostal church. She co-chairs the Elim Justice Forum; serves on Elim’s Regional Leadership Team in Wales; is a member of the Evangelical Alliance Council; and is Kyria Network's National Leader for Wales. She is passionate about inspiring and equipping the Church to challenge injustice and transform society. Catherine and her husband have two young daughters.

Chair of the International Impact Committee

Sally enjoyed a 30 year career in retail banking. During a career break, she had two life changing assignments including volunteering in Tanzania with Tearfund, which led to a Masters in International Development. Since then she served as a non executive member on the Board of the Department for International Development (DFID), through to its merger with the Foreign and Commonwealth Office in September 2020. She is also a Non Executive Director on the boards of the Principality Building Society, Hafren Dyfrydwy Ltd (a Welsh water company, part of the Severn Trent Group) and Delio Ltd (a new fintech company).

Jean Paul has over 25 years of leadership experience in profit, not-for-profit and civil society settings.  He has served as a senior consultant for KPMG and also as a country director, regional director and continental director for a variety of international nonprofit organisations (including World Relief, Clinton Foundation, Alliance for a Green Revolution in Africa). Jean Paul has served as an elder for Nairobi Chapel and is now a pastor for Hope Evangelical Church in Kigali, Rwanda.

Yemi, a former Banker and Consultant, is the Lead Pastor of Trinity Chapel in Beckton, East London and is an Area Pastor within the RCCG UK network. Yemi has been a committed Church builder for over 25 years. He is passionate about teaching the Gospel and seeks to empower people, shaping and impacting society. Yemi previously had an extensive career in the Financial Services sector, both in the UK and Nigeria. He is married to Adejumoke who is the Family Life Pastor of Trinity Chapel.

With a background in International Relations, Harry has worked as a Policy Advisor to the UK Government, Parliament and numerous international organisations. Harry served on the UNICEF UK board for eight years as their special advisor on youth. He is a co-founder of Youth for Change, a global youth advocacy organisation which tackles Female Genital Mutilation and Early Forced Marriage. Harry and his wife are members of Hillsong Church in Croydon and play an active role in the leadership team.

Chair of the Global Fundraising and Comms Committee

David is Managing Director of the Legatum Institute. He has worked in the private sector for most of his career, where his roles focused on brand, marketing and customer experience, including as Trading Director for Virgin Retail. David has also served as the CEO of City Gateway, a non-profit organisation, and he remains on their Board also. David attends St Luke's church in Kentish Town with his wife Fatima and their three children.

Prabu has been working with Tearfund since 2013 in various capacities, including providing technical support and leadership on our sexual and gender-based violence work across multiple countries. He was leading Tearfund's Gender and Protection Unit, and subsequently the Thematic Support Team, before taking on his current role of overseeing Tearfund’s work across Asia. Prabu is an alumnus of Tearfund's Inspired Individual programme, and is currently based in Colombo, Sri Lanka.

Rosa has been with Tearfund since 1998. She started out working for the Andean countries, and became the cluster leader for Latin America and the Caribbean in April 2018. Prior to Tearfund, Rosa served as a consultant for various international organisations and as a manager for NGOs. Rosa is married to the pastor and missionary Hernan Bravo and has two children and two grandchildren.

Douwe has been working for Tearfund for a number of years in Afghanistan, Sudan and Nepal. Since 2018 he has been based in Kigali, Rwanda as the Regional Director for East and Central Africa. Douwe lives with his wife and four children. He loves networking and supporting the teams working with him.

Martin joined Tearfund in June 2020 as Head of the Eurasia and North Africa Cluster. Previously, he worked for the Department for International Development, for the last few years focused on Syria and the Middle East, and before that based in Kenya and Bangladesh.  He has also lived in Malawi, Ethiopia and Fiji. He is married to Juliet and they have four children, and attend The Point Anglican Church in Burgess Hill. He hopes to soon be based in Amman, Jordan.

Kossi became the West Africa Cluster Lead in May 2019. He joined Tearfund in 2013 as the Programme Coordinator for Mali, and subsequently became the Country Director for Mali. Previously, he has held leadership positions in a small Christian NGO and Compassion International in Togo, and has also held several consultancy roles for SEL France. Kossi is married to Pascaline and they have three children. He attends the Assemblies Of God Church, Temple des Oliviers, Cocody-Palmeraie in Abidjan.

Jennipher joined Tearfund as the cluster lead for Southern and East Africa in September 2018.