Where can Children play in a refugee camp?

When 27-year-old Monjur arrived in the hot and crowded Kutupalong camp of Cox'sBazar his primary concern was the welfare of his children. As a Rohingya refugee arriving in Bangladesh from Myanmar he and his family had already witnessed unbearable scenes of violence. The Rohingya crisis, which started one year ago, has lead to over 700,000 people fleeing over the border to camps in Bangladesh.

When 27-year-old Monjur arrived in the hot and crowded Kutupalong camp of Cox’s Bazar his primary concern was the welfare of his children.

As a Rohingya refugee arriving in Bangladesh from Myanmar he and his family had already witnessed unbearable scenes of violence.

The Rohingya crisis, which started one year ago, has led to over 700,000 people fleeing over the border to camps in Bangladesh. Exhausted families such as Monjur’s were trying to survive in the most basic of conditions – many without shelter or clean water.

‘We were worried about our children’s mental health, because of what they faced,’ says Monjur.

Jacob Sarker, Bangladesh Country Representative for Tearfund, says ‘We are now a whole year on and the threats facing the Rohingya people continue. The people and the Government of Bangladesh have welcomed the Rohingya refugees with generosity and open borders, but the situation in the camps remains urgent and desperate. The Rohingya people are facing the continued threat and reality of rains, mudslides, poor sanitation, the spread of disease, and are reliant on food distributions.

‘We are working through our partners to address some of these needs, yet it’s also important we recognise the wounds they are bearing of the trauma they have endured.’

For young children in particular, early experiences of such a crisis have a lasting impact. Over the past year our partners have opened 12 child-friendly spaces, and plan to open more next year.

‘The need for psychosocial support is on a monumental scale. We need to let children be children,’ adds Jacob. 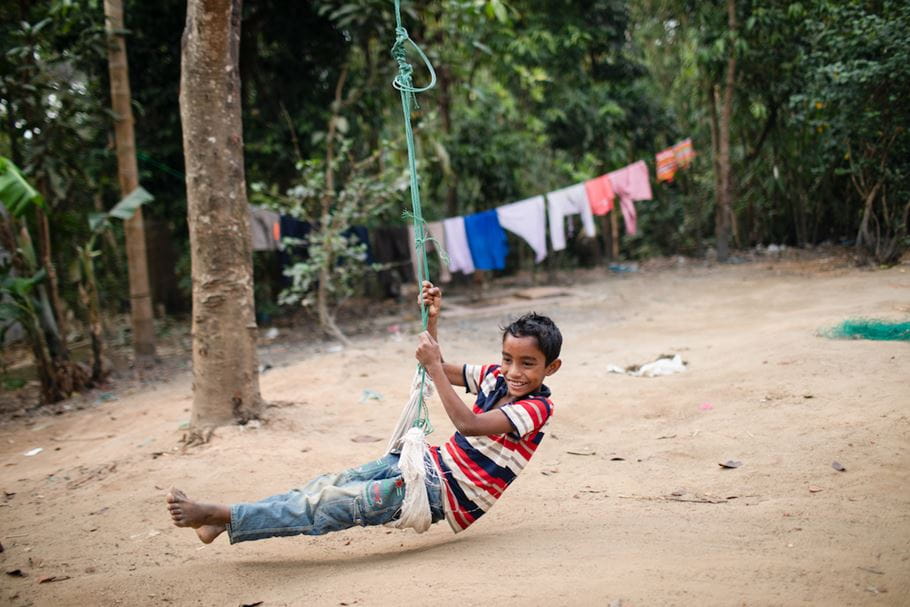 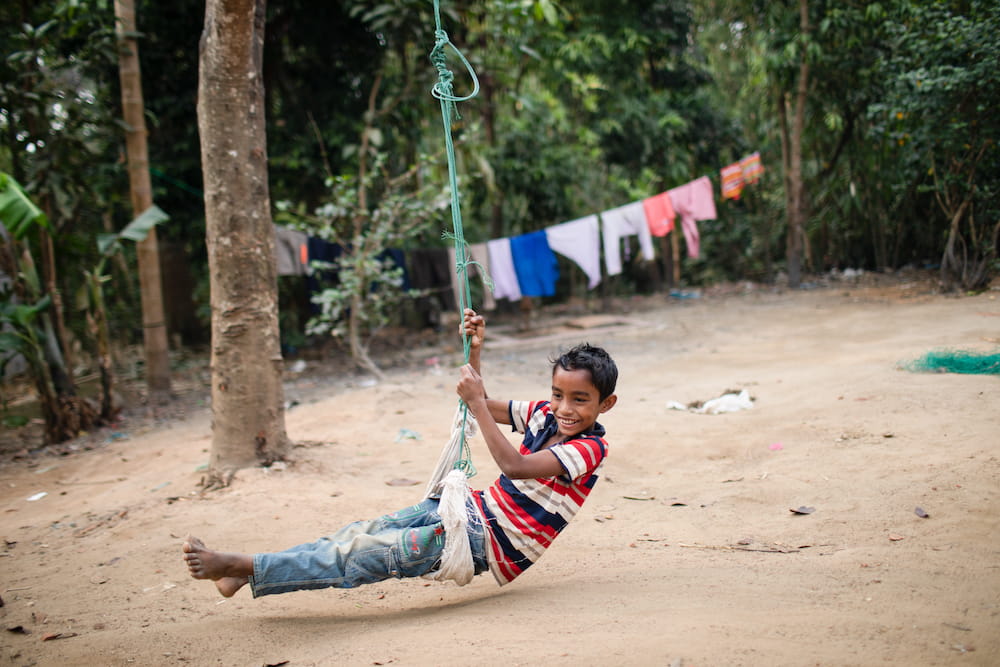 Child-friendly spaces set up by Tearfund partner COAST Trust allow children in the camps to draw, write poetry, talk to a trained therapist, play, learn and sing songs together.

The spaces are reinforced bamboo shelters, which accommodate 60 children per day, from young children through to adolescents. They are a sanctuary from the harshness of life outside and provide children with a chance to enjoy some lighter, fun times together, as well as an opportunity to process what they have experienced.

Monjur says: ‘My family has been helped a lot by Tearfund’s partner, COAST Trust.

'My son attends the child-friendly space regularly, it’s a great relief for me as I was always feeling worried about him.

‘In the first few days of entering Bangladesh, I had fears and insecurities – that we might not be accepted, that we might be abandoned or mistreated by bad people. But over time we have got some assurances that we can at least survive here.

‘We have been helped by several organisations and individuals here, but I honestly feel that you COAST-Tearfund staff are doing something very different. You don’t just help with materials, but the way you show warmth and closeness is incomparable. You people heal our hearts.’

‘I am really grateful to you, and your concern about our difficulties.’ 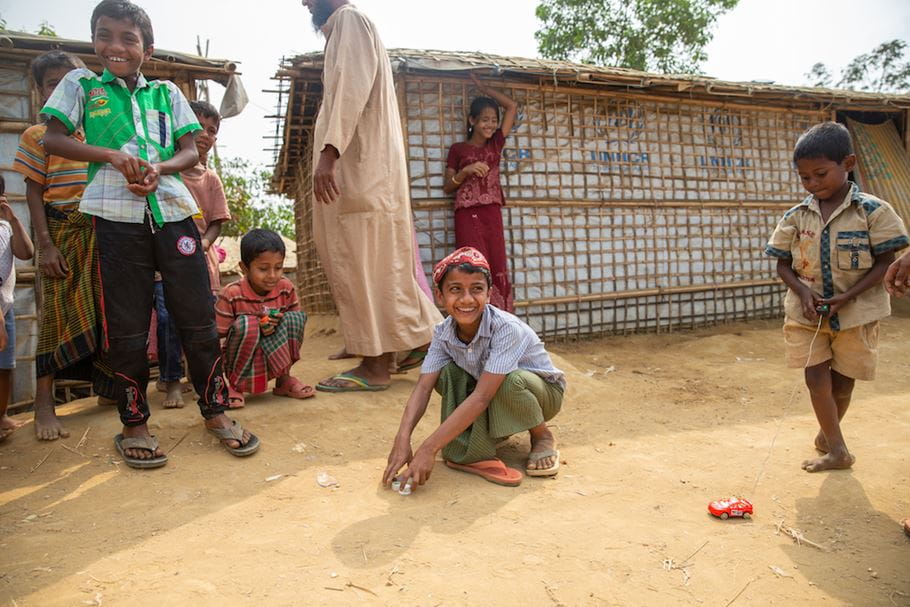 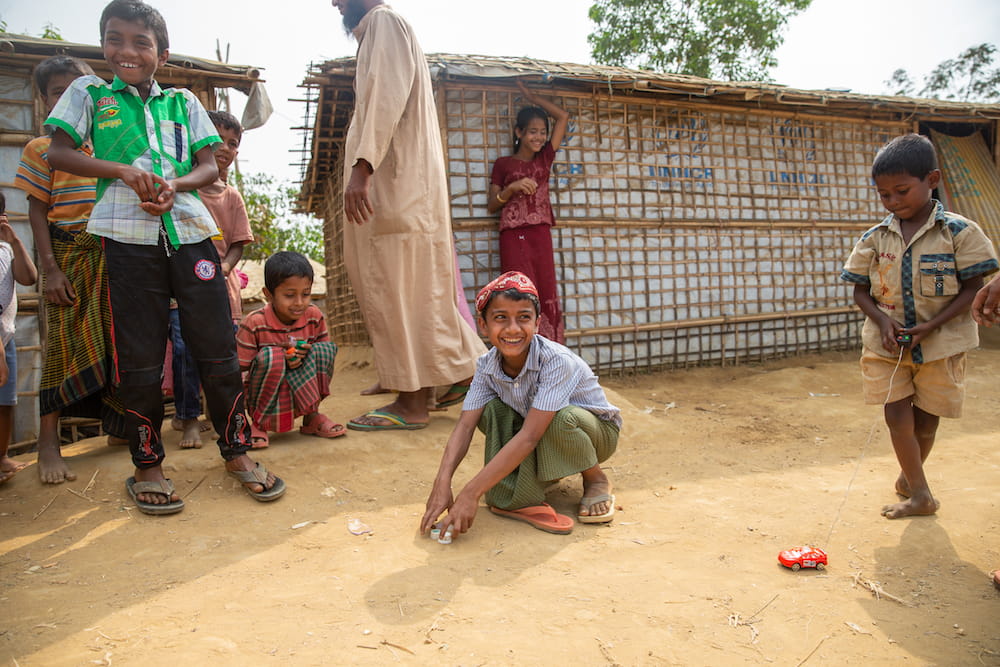 Tearfund partners have also provided psychosocial support to many adults, including parents of the children affected, with the services reaching 1,641 children and adults so far. Our hope is to see this extended to help hundreds more over the next 18 months.

Work is also being done to construct dignified bathing spaces, desludge latrines to prevent the spread of diseases, provide solar light to keep community spaces safer. We will also take a range of measures to mitigate against the impact of monsoon rains – including planting trees, reinforcing tarpaulins and training the Rohingya people in how best to secure their shelters.

We’ve also been supporting the Bangladeshi host communities with essential cooking items, and will start a micro-loans scheme in the next few months to improve business and livelihood opportunities.