A group Sir Cliff supporters hatch an ingenious plan mark the singer’s 60 years in showbiz. The plan goes better than expected and Tearfund benefits to the tune of a few grand.

A group of Sir Cliff supporters hatch an ingenious plan to mark the singer’s 60 years in showbiz. The plan goes better than expected and Tearfund benefits to the tune of a few grand.

There are fans and there are Sir Cliff fans...

When Carol Sangwell, President of the Cliff Richard Fan Club for London and Surrey, thought about how they could mark Sir Cliff’s 60th anniversary in music – she wanted him to know what he and his music means to his fans.

‘A lady called Suzanne Fritsch came up with the idea of doing a song for Cliff. I decided to ask the Facebook fans if they liked the idea and they did.’

We still believe in you

The idea was to crowdfund a song in his honour, based on written contributions by his fans. She enlisted the help of fellow Cliff fan Steve Carroll, a rock ‘n’ roll singer from Cheshire.

They put the proposition to fans on Facebook: ‘Make a donation to fund the song, and send us two lines about Sir Cliff and what he means to you.’

‘This project is unique,’ enthuses Steve. ‘No other set of fans has ever done something like this.’

It was a steep learning curve for both of them, but they persevered. ‘Every hurdle we hit, we’ve been able to overcome,’ says Carol. ‘Someone’s looking down on us!’

They gave themselves from January until August to raise the £4,000 needed to fund the writing and recording of the song. That target was smashed in just ten days. Surplus funds raised were designated for Tearfund. On the day of release, the amount to a whopping £7,070, with CD and digital download sales to follow. 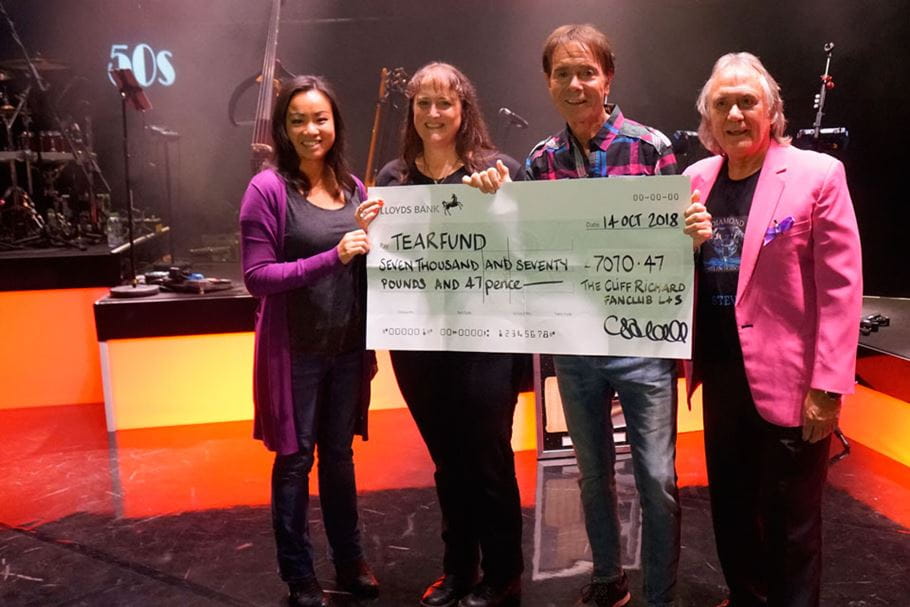 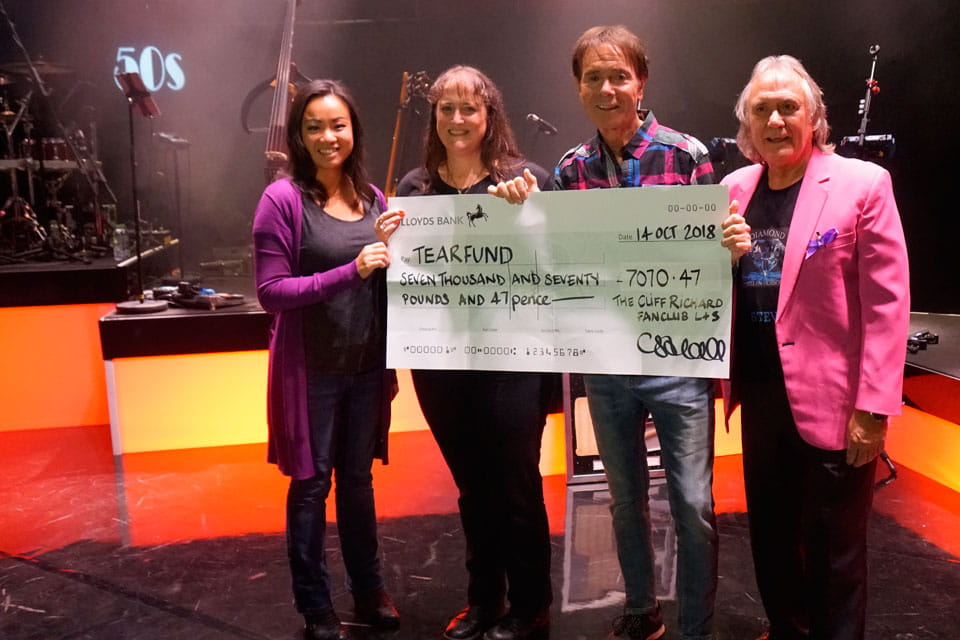 ‘We know it’s a charity close to his heart,’ says Carol. ‘He’s got a lot of dedication and love for you guys and it was important we chose something that mattered to him.’

They employed songwriter-for-hire Paul Whitfield – also a worship leader at New Life Christian Centre in Wakefield – to turn the lines fans into inspiration for the song. The result was Diamond, a song with a definite ‘Cliff-ness’ to it.

Power to all his friends

In the end, they didn’t even need all of the £4,000. After they had paid for the services of they found a clutch of previous Cliff collaborators, ready to offer their services for free. Vocal duties are handled by Helen Hobson, who had played opposite Sir Cliff in the musical stage production of Heathcliff.

Also pitching in for the love of Sir Cliff were: Alan Tarney, writer and producer of songs such as We don’t talk anymore, Wired for sound and Always Guaranteed; celebrity biographer Nigel Goodall wrote the CD liner notes, and mail order music company Leo's Den. What is it about Sir Cliff that provokes everyone’s generosity?

‘It’s because of his dedication,’ according to Helen. ‘It’s for what he gives back to the fans. And the fans themselves are so wonderful too. I remember when it was announced that I was going to play alongside Cliff in Heathcliff, the fans couldn’t have been more welcoming, even though I wasn’t a big name. They still come and see me when I’m appearing in other productions and say hello.’

‘We spent all day in his studio in Richmond,’ remembers Helen. ‘We had a long conversation about how to sing it. He said, think of singing to one person who loves listening to Cliff and the lyrics are directly sung to them.’ 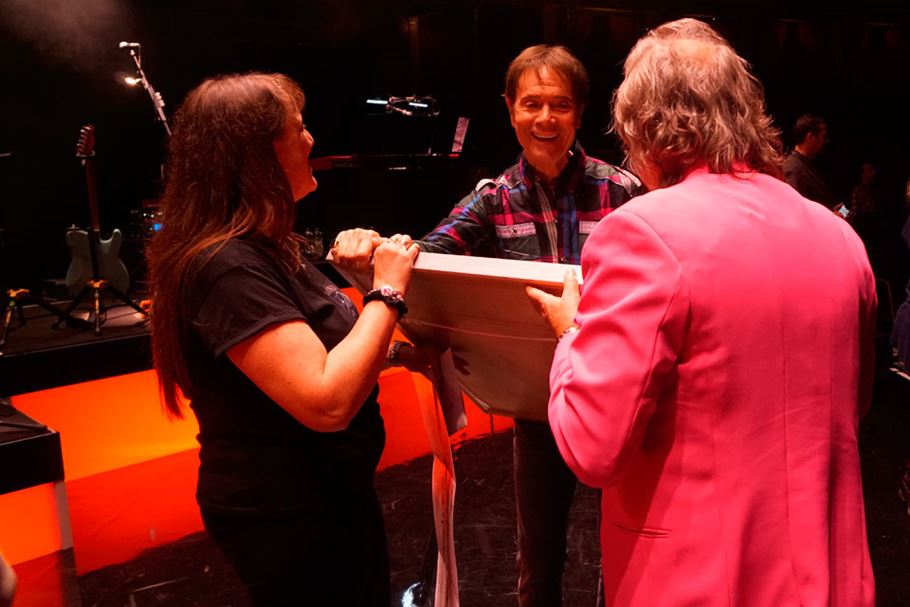 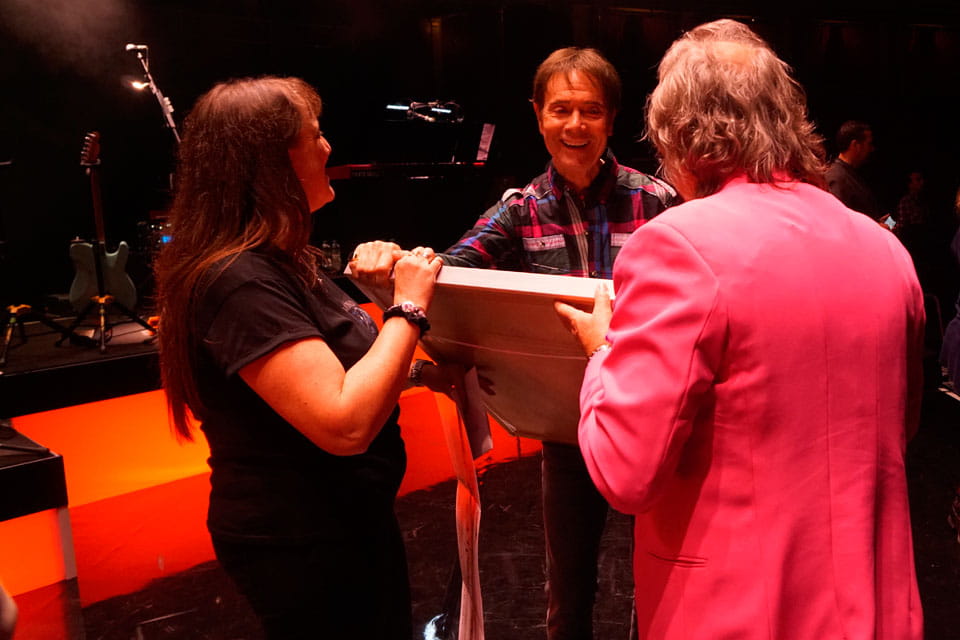 Carol and Steve present Sir Cliff with a framed copy of the single.

The finished song was polished up by Cliff’s master sound mixer Keith Bessey, also for free.

‘The result was unbelievably good’, enthuses Steve. ‘We played it, and Carol and I both cried.'

The finished CD was presented to Cliff on the stage of the Royal Albert Hall, following a soundcheck for the evening’s performance – coincidentally also his 78th birthday. It’s easy to see why the singer inspires so much devotion as he happily chats to lucky fans and poses for photos.

Helen asks about Tearfund and what the money will achieve. You can see her enthusiasm grow as I explain about the work we do around the world, through the local church.

Carol is delighted to be handing over such a large amount of money to Tearfund. ‘When you find out about something that Cliff is really attached to and feels passionate about, if you can contribute to something like that, that’s fantastic.

‘It’s a celebration of 78 years of giving to us. This is a thank you to him for being such a lovely person.’

The single Diamond is available for download, with profits going to Tearfund.