Singing from the same hymn sheet

This story contains references to domestic violence that some readers may find upsetting.

‘The genocide happened here in this village,’ says Télesphore from Gisagara district in southern Rwanda.

‘People were killed. Others fled and told of what happened. I was one of the people sent to prison – they kept us there to find out who was involved. I was jailed in July 1994, right after the genocide. But I was found not guilty and released in 2003.

‘When I came home, I knew that my wife had committed adultery because she had a daughter while I was in prison. Our relationship was not good. We often got drunk – both of us. I would call her a prostitute.’

There was hurt and frustration for Télesphore’s wife, Primitive, too. ‘My husband is older than me,’ says Primitive, ‘So I am meant to be humble. He controlled all our money. I was not even a signatory on our bank account. I had livestock when Télesphore was in prison. But when he came out he took all of it.’

Moving on from the genocide
Over the last two decades, Rwanda has made significant progress to recover from the devastation of 1994 – last year marked the 25th anniversary of the genocide against the Tutsi people. Stable governance since has helped the country greatly. But more than a third of people – such as Télesphore and his family – still live below the poverty line.

Tearfund partner Association Mwana Ukundwa (AMU), meaning ‘beloved child’, believes everyone should be given opportunities to reach their God-given potential. AMU works alongside individuals and families to improve their harvests and income. They do this by helping communities work together and form self-help groups.

These are small scale community savings schemes which also offer broader mutual support to members. They allow the poorest people in communities to save together and access low-interest loans from these savings, which they can spend on fertilisers or use to start up small businesses. 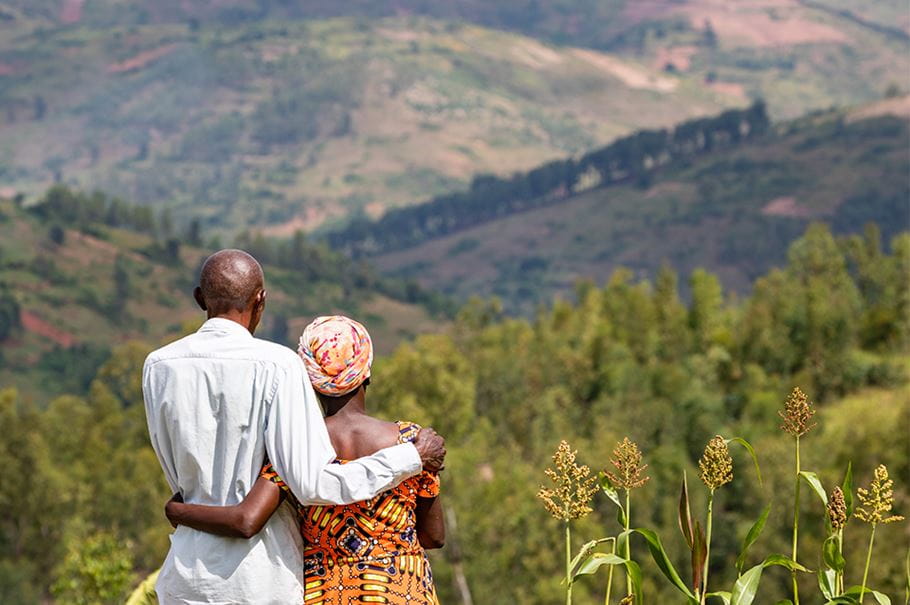 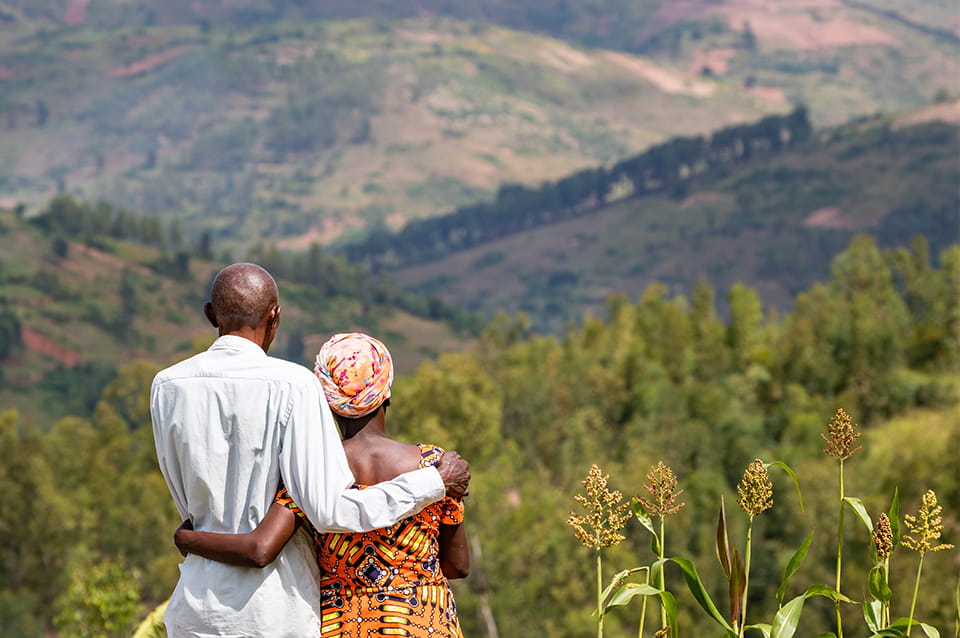 Harmony for divided families
Bernadette, an AMU community facilitator, visits villages to find and support families in greatest need – encouraging them to work together to overcome their problems.

According to a UN report, more than a third of Rwandan women have experienced physical and/or sexual violence at least once in their lifetime.

‘Ours was a home of poverty,’ says Télesphore. ‘It started to deteriorate. But then Bernadette from AMU came. She advised us to join a Bible study group. That was the beginning of our development journey.

‘We realised we should forgive each other. So I forgave her and she forgave me. We decided to live in harmony. We joined a self-help group and started to farm maize, beans and cassava. We have a cow to provide us with milk.

‘But the biggest change is harmony within the family. We have a common vision. We have good times chatting together – there is peace in our home.’

During 100 days of bloodshed in 1994, around 800,000 people were killed in Rwanda – mostly from the Tutsi ethnic group, at the hands of Hutu extremists. The devastating effects of the genocide still ripple through to today. Unlike Télesphore and Primitive, many families need support to reconcile and continue to rebuild a traumatised nation.

Sharing the love
‘Because of the changes in our home, we now help other families with issues of domestic violence,’ says Télesphore. ‘So far we have helped six families to resolve their problems. I still visit them and they thank me for my good advice. It is the word of God through the Bible that has helped us and these families.’

‘The change in us has been tremendous,’ says Primitive. ‘We want to thank God because we were in extreme poverty. But now we have changed.

‘My husband would never be with me while I worked. When I was farming the fields he was somewhere else and I was alone. Now he's changed and he comes with me. When I am preparing food he goes to fetch water. When I am busy he feeds the children. I feel that he is really my partner now. It is a sign of love.’

‘We never used to go and worship at church together,’ adds Télesphore. ‘But when we decided to really change we realised we needed to have a day to go together and worship God. Now we go together as a family.’

This story was first shared through World of Difference – a new way of supporting Tearfund.