The unfolding crisis in Mozambique: how you can pray

Warning: contains mention of sexual and gender-based violence which some readers may find upsetting. 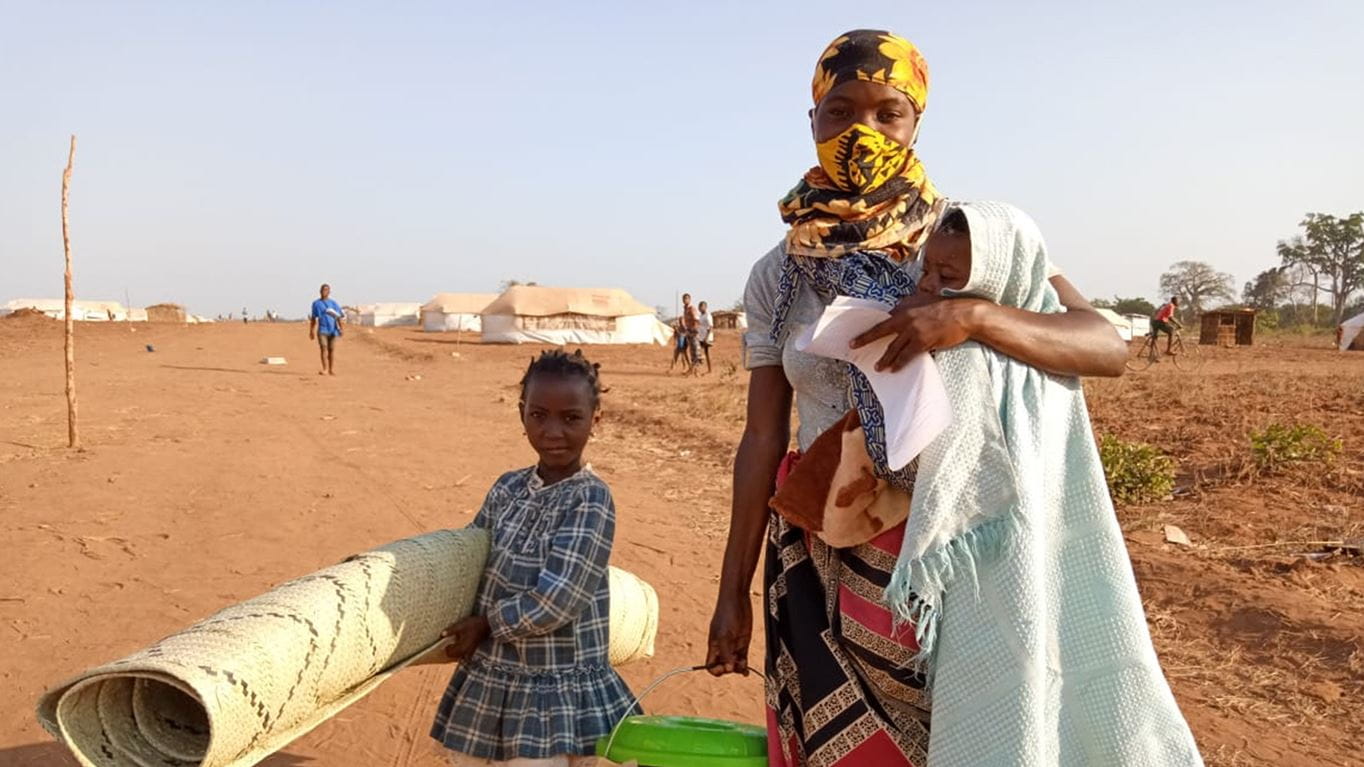 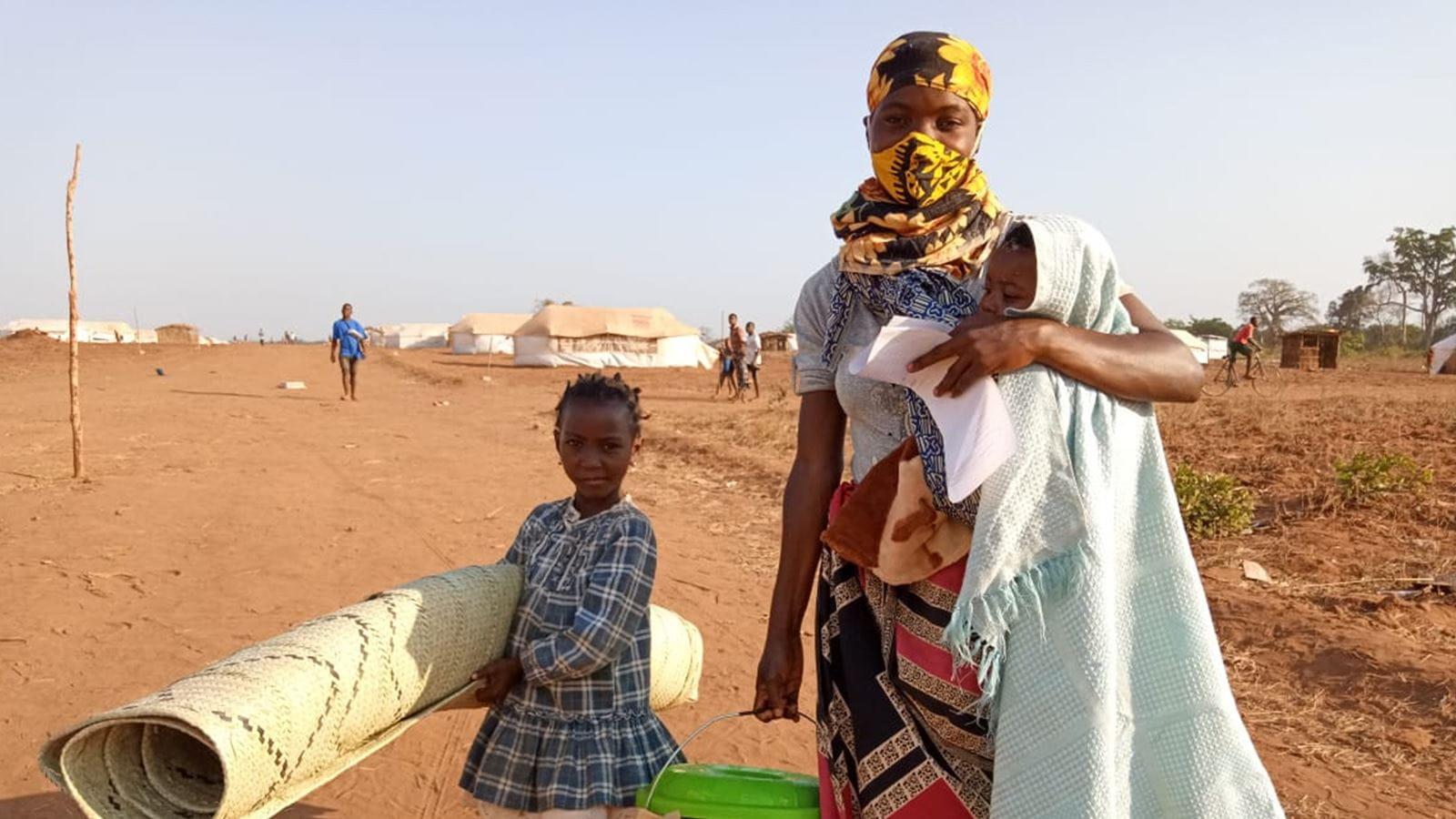 The conflict in northern Mozambique has now been going on for three years. But last year, the situation got even worse. Here’s everything you need to know about the crisis and, crucially, how you can be praying.

The first attack happened in the province of Cabo Delgado in 2017 by an armed group that locals call ‘Al-shabaab’, which has ties to the Islamic State. Since then, the group has carried out more than 600 attacks in this location. They have taken over a strategic port and burned dozens of villages in the oil and ruby-rich district.

The group has become increasingly violent. They are calling for Sharia law across the country, and have created training camps to fight against government forces.

Leaving a trail of human- rights abuses, Al-shabaab are accused of frequent kidnappings, beheadings, human trafficking and violence against children in the towns they are claiming. This has led to more than 2,000 people losing their lives and hundreds of thousands of people forced to flee their homes. Most of these people fled in recent months, as attacks have begun to escalate.

‘The situation in Cabo Delgado is very bad right now as increasing numbers of villagers are being forced to leave their homes and abandon their crops and jobs to seek shelter in refugee camps,’ says Edgar Jone, who leads Tearfund’s work in Mozambique.

What Tearfund is doing

Tearfund has been supporting those who have fled the violence through our work in camps in the south of Cabo Delgado and its neighbouring districts. Through our local partners we have distributed tents, water and sanitation kits, blankets, mosquito nets, torches and sanitary pads.

We are also providing families with food kits, which contain farming tools and seeds. These allow people to grow their own food and not rely solely on aid.

In situations like this, where people have lost a sense of normality, as well as everything they knew, kits like these help restore dignity and give a sense of empowerment and ownership. People are able to grow and support their own families through this.

But the increase in violence means supplies are running low.

‘The situation is getting desperate as we have new arrivals each day and we have already run out of resources to meet their needs.’ 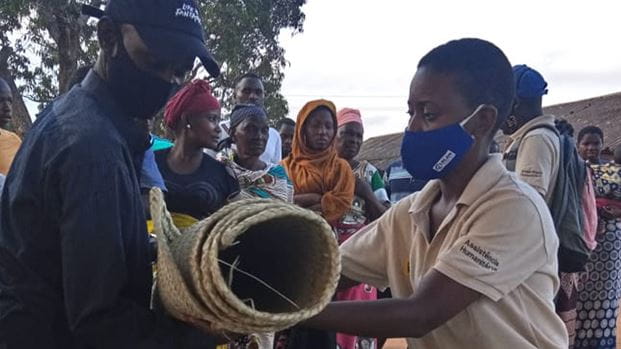 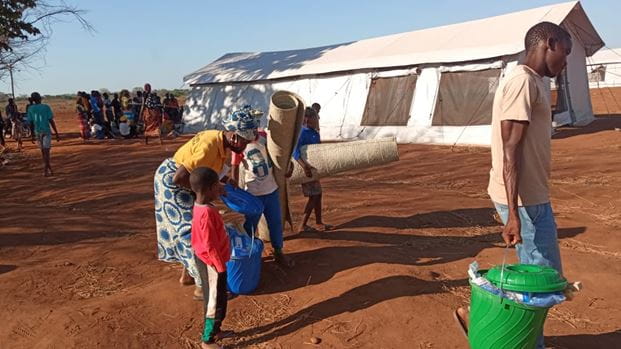 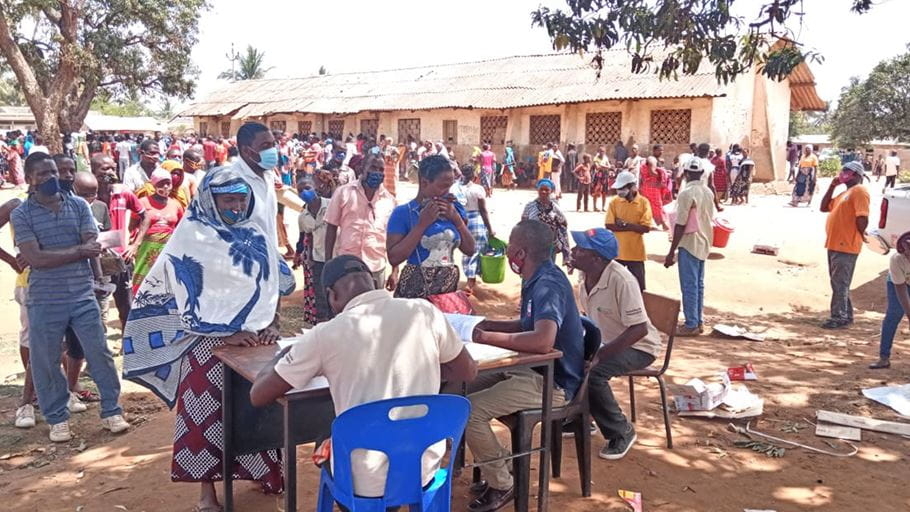 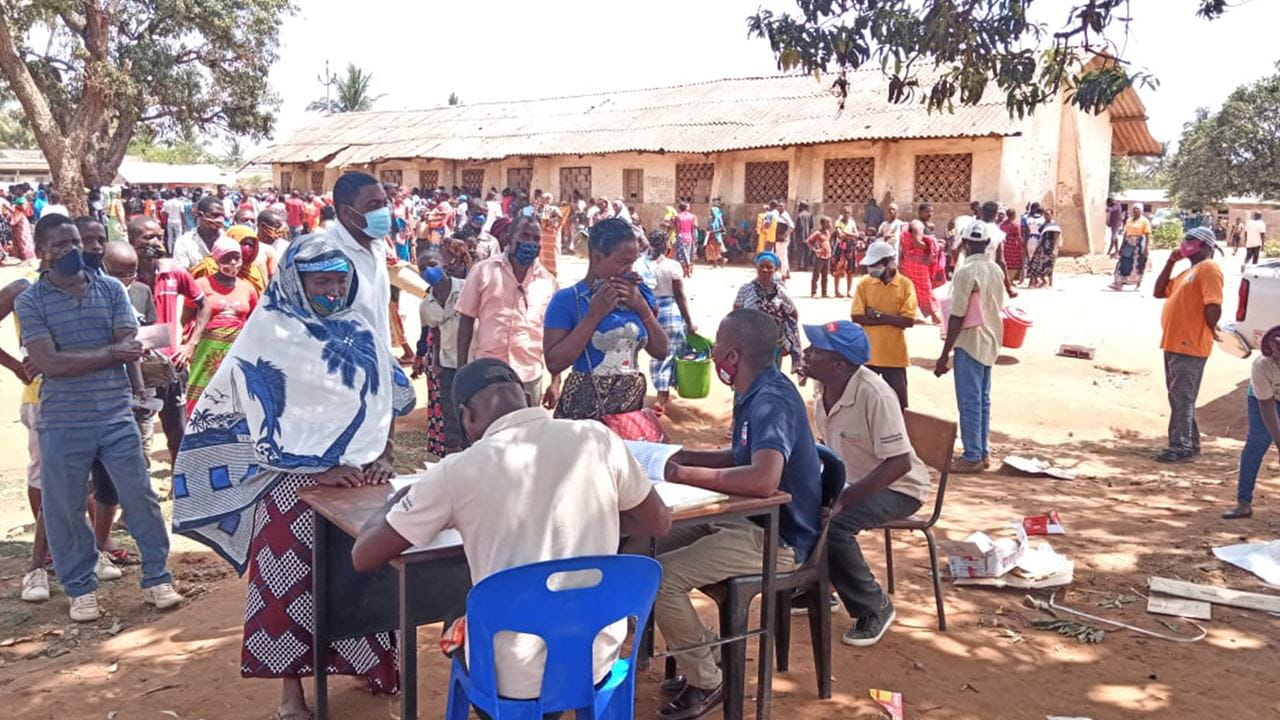 Through our local partners we have distributed tents, water and sanitation kits, blankets, mosquito nets, torches and sanitary pads to people in the camps. Photo credit: CEDAS

Through our response we have been prioritising the most vulnerable – female households, pregnant women, widows, children and the elderly. These groups all face growing threats to their safety, or may find it harder to find help themselves.

In camps and temporary shelters, the risk of sexual and gender-based violence (SGBV) is high. Tearfund has trained 50 community activists in the camps to help protect women and girls, as well as to offer support and the reporting of cases.

We are also sharing leaflets that carry messages about SGBV, making sure they are available when essential items are distributed. These include how survivors can report incidents and access support.

With rising numbers of people forced to flee their homes and live in cramped conditions, it means coronavirus could spread rapidly through the camps. The Nampula province, which is hosting the largest number of people who have been affected by the violence, has been hit hard by the virus.

Cases are rising, but Tearfund and our local partners are doing all we can to prevent it from becoming even more deadly.

We’ve been training all staff in the camps about coronavirus, as well as providing them with Personal Protective Equipment, so they can safely serve people in need. We’ve been able to enforce social distancing when items are being distributed. We’re sharing information with people within the camps, so they can recognise the symptoms and stay safe, as well providing them with water and soap.

This is also helping to prevent the spread of cholera, a deadly waterborne disease. 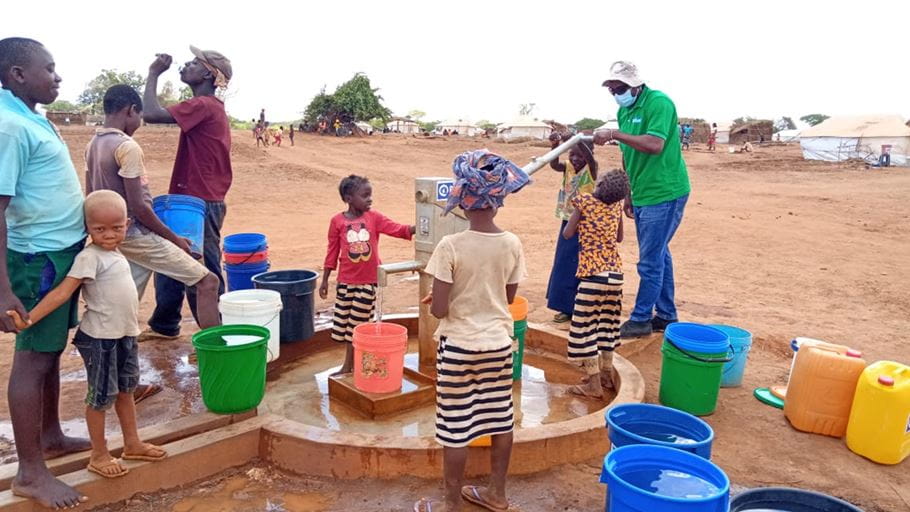 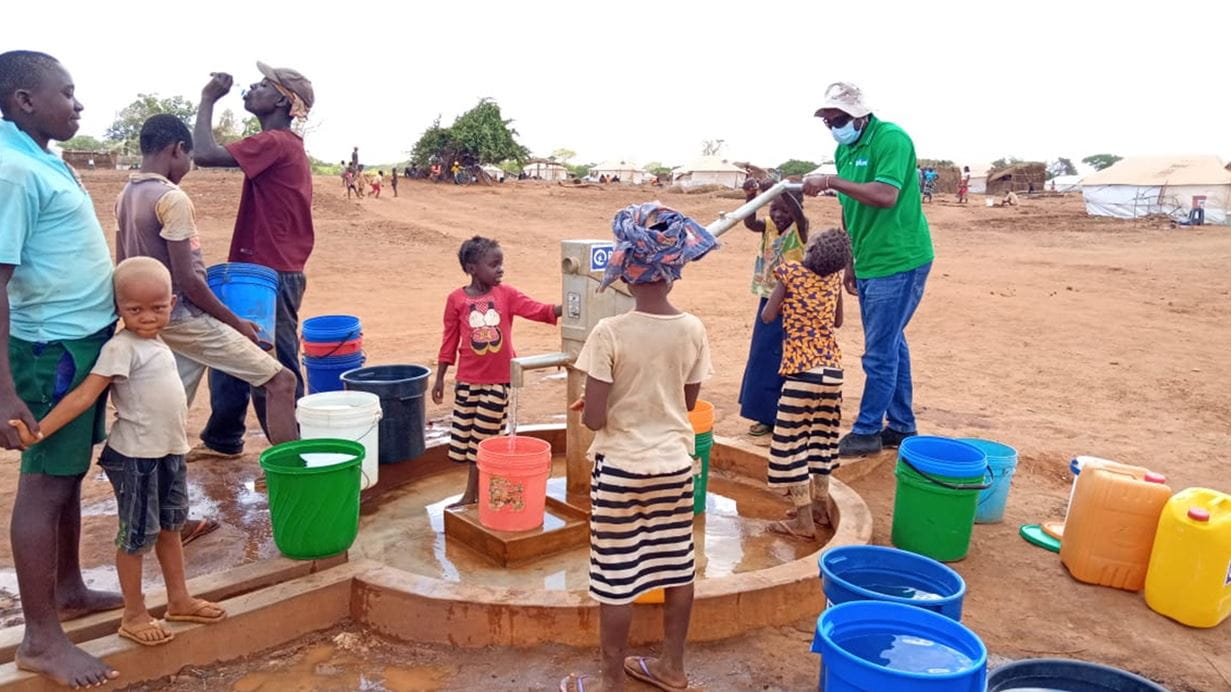 Tearfund and our partner organisations have been able to help provide people with water and other essentials. This helps them to stay safe from disease and illness. Photo credit: CEDAS

As a result of the deteriorating situation, the Southern African Development Community – an inter-governmental group of countries – is exploring ways it can intervene to help stem the situation.

‘Violence is rising, and the amount of people needing urgent assistance is rapidly increasing,’ says Edgar.

‘Please keep our staff, local partners and the people we serve in your prayers. It is not only a huge comfort to our teams in this difficult time, but we believe they are crucial in helping to turn the tide against this increasing wave of violence.’