The rains won’t stop: no escape from floods in South Sudan

Please continue to pray for South Sudan – the flooding crisis has led to a hunger crisis in the country.

Last year, entire villages were wiped out by the worst flooding South Sudan has faced in years. Many of them are now abandoned and large areas have turned to swamps. The water still hasn’t receded in the majority of places – more rain keeps falling and it’s putting everyone at risk. Here is an update on what’s happening and how you can pray.

‘The flooding changed so many things for people in South Sudan,’ shares Anthony Rama, who leads Tearfund’s work in South Sudan. ‘People were forced to move around on boats, risk drowning or being attacked by crocodiles.

‘The harvests were also completely destroyed – all the crops and livestock gone. Last year’s harvest in July should have fed people until this spring. But it was all washed away. Hunger is a pressing issue now for too many people.’

Tabitha* fled with her family to a refugee camp in northern Uganda when the floods came. She returned earlier this year to find her house completely destroyed. Her family now live in an abandoned house – and are aware that the owners could return at any time. But it’s all they have.

‘Life is very difficult here,’ shares Tabitha. ‘I am now surviving through very difficult means, going out using the canoe to fetch firewood in the water and later on come and sell it to get little money to buy food for my children. My husband is not here, he is in Juba [the capital city] trying to look for a job but is getting nothing.

‘There is nowhere one can cultivate to grow crops for survival.’

And to add to this, Tabitha’s home is still surrounded by water – which keeps rising.

Peter* and his wife, Martha*, have two young children aged three and one. They had to abandon everything when the floods came – relocating to another village.

‘Life before the floods was good because I used to cultivate sorghums [a type of cereal crop] and raised some cattle. I had about 40 cows and bulls, 20 goats and more than 35 chickens. But my village was flooded, I lost everything,’ says Peter.

‘Currently, my family survives by collecting and selling firewood and bundles of dry grass. Sometimes I go fishing. I sell these fish and collect some small money to buy food for the family.’

Peter and Martha hope to be able to move back eventually. But as the rains keep falling, there is no telling when this will be. 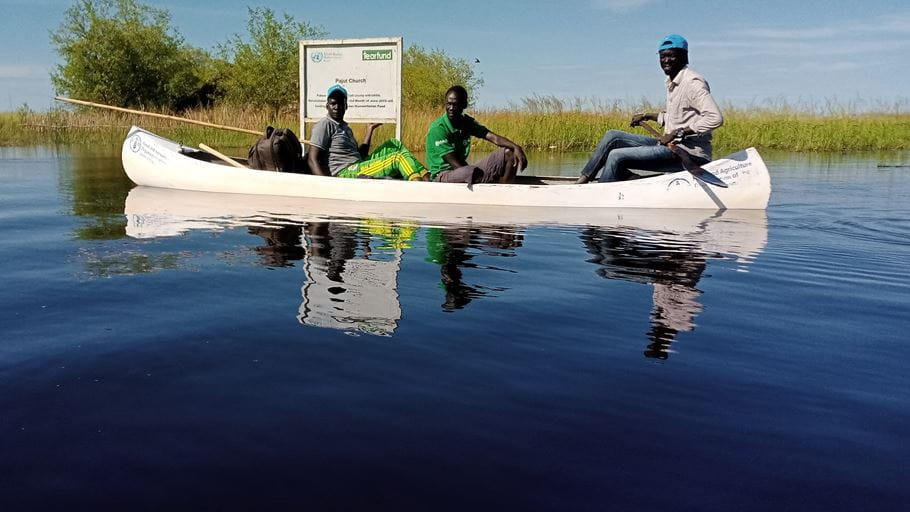 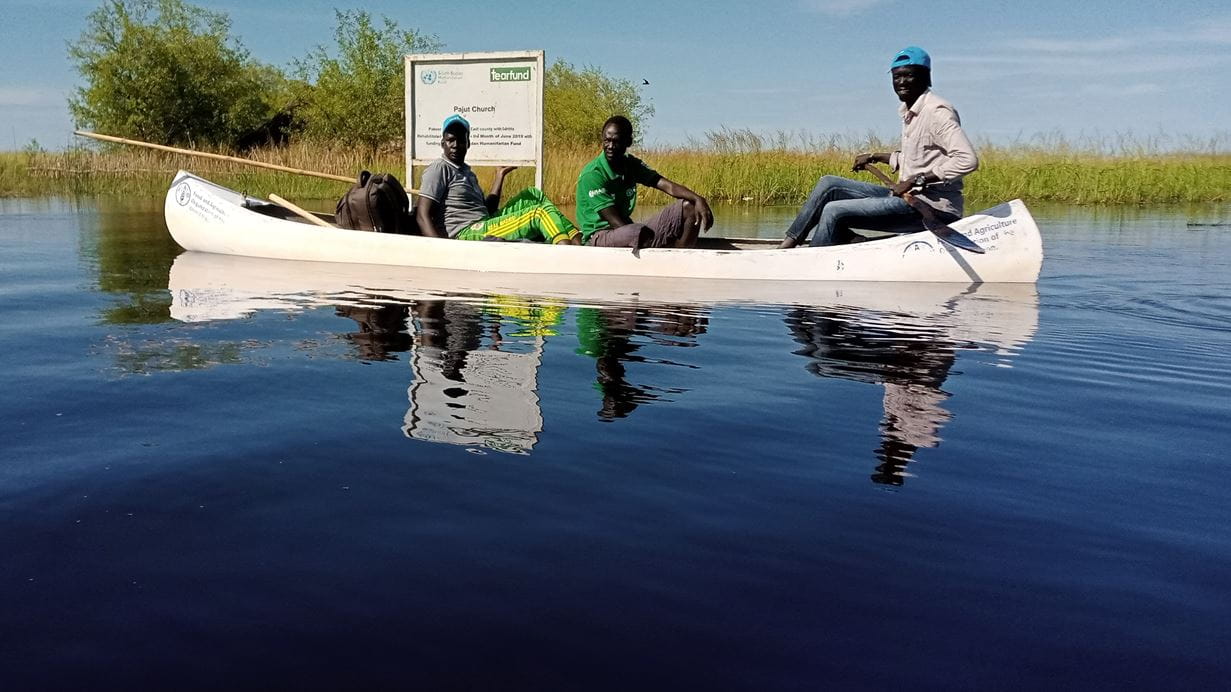 Canoes remain essential for getting around. Tearfund is using them to support remote communities that have been cut off by the flood waters | Credit: John Majok/Tearfund

Tearfund is helping families like Tabitha’s and Peter’s. In the temporary camps, where many people have been forced to relocate to, Tearfund has improved access to safe sanitation by building latrines. With the continuing rainfall, in vulnerable areas like this, the risk of waterborne illnesses is high and can be fatal. Access to clean water and safe sanitation becomes a lifeline.

Although Tearfund’s nutrition centres – where we support families facing hunger and malnutrition – have been completely damaged by the floods, Tearfund has been able to secure funding for four temporary sites. These are closer to where communities have been forced to move to and means we can continue this vital work – which is needed more now than ever.

Tearfund has also acquired canoes so that we can support remote communities and places that have been cut off by flood waters.

‘If the weather patterns continue to change and we see even more flooding, then we will have to look at how we can support communities with this change. People will have to find new land to live, grow crops and graze cattle on,’ explains Anthony Rama. ‘It is uncertain what land will be suitable for this.

‘It is a big endeavour and we really value your prayers as we seek wisdom in how we can best continue to support people in South Sudan in these challenging times. Thank you for continuing to stand with us.’