Love in God's neighbourhood: why charity doesn't start at home

Tearfund’s Gideon Heugh and Dr Ruth Valerio explore how we can live out Jesus’ answer to the question, ‘Who is my neighbour?’

In the early days of the coronavirus pandemic, as nations entered into the uncertainty of lockdown, we saw an outpouring of neighbourliness. Unable to venture away from our homes, we reached out, perhaps for the first time, to the people who lived around us.

This was a beautiful thing. Wonderful stories emerged of people helping each other in a time of need – a poignant demonstration of why community is so vital. Churches responded to local needs by supporting the bereaved and lonely, increasing food bank provision, and helping out in whatever ways they could.

Surely this was a perfect example of what Jesus meant when he told us that the greatest commandment, in addition to loving God, was to love our neighbours?

There has been a dark counterpoint to the neighbourly love we have witnessed during the pandemic. In challenging times, there can be a tendency for nations to turn inwards. This has been evident in the UK government’s immoral decision to cut foreign aid, as well as the unwillingness of wealthy countries to share vaccine supplies with other nations.

Whenever an organisation like Tearfund launches an appeal highlighting the plight of vulnerable people overseas, there is always the same response from a small but vocal minority:

‘Why should we help anyone in a country thousands of miles away when there are plenty of people in our own country who are struggling?’

‘Jesus said that the greatest command was to love God and love your neighbour, so surely that means that our focus should be on the issues that are closest to home?’

There are, of course, many serious needs that people are facing in our local communities. Many brilliant organisations are involved with such issues, and it is right to support them and respond to those needs. At Tearfund, we always encourage our staff and supporters to get involved in local causes: our work is founded on the principle that local churches can change the world.

But when Jesus said ‘love your neighbour’, he wasn’t just talking about the people next door, or even the people in the next town. So what exactly did he mean?

Fortunately for us, someone asked him that exact question.

The command raises the question of ‘Who exactly is my neighbour?’ – a question that by Jesus’ time had already been fiercely debated by Rabbis for generations.

When a religious expert asked Jesus what his answer to this question was (Luke 10:25-29), he was asking where Jesus stood in this debate. Are our neighbours the people closest to us, the people of our own family, tribe or nation, or are they someone else entirely? 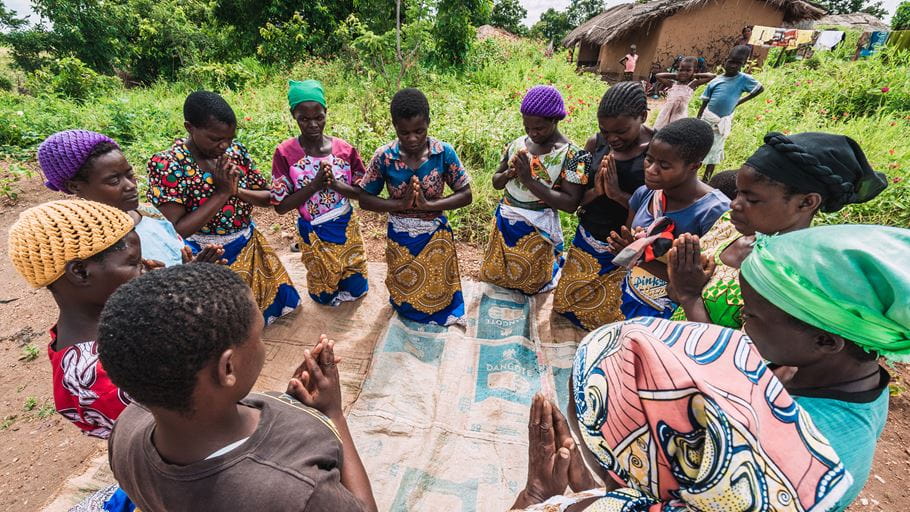 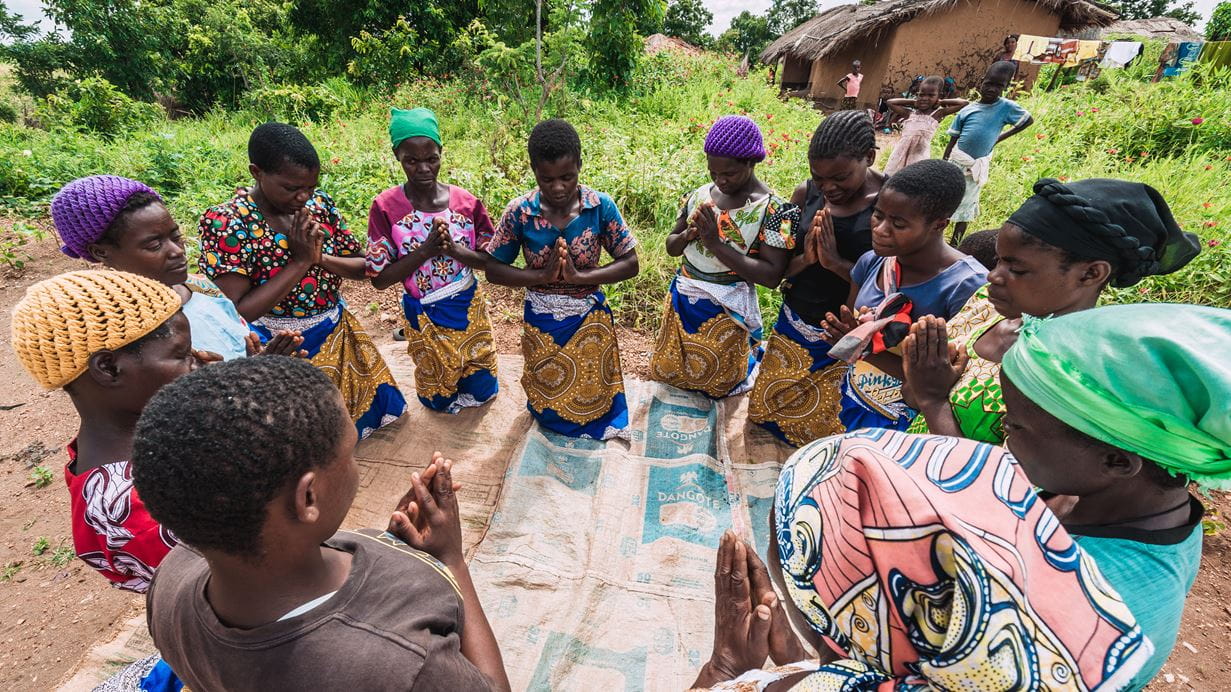 A group of women pray together in a rural village in Malawi | Credit: Alex Baker/Tearfund

The answer Jesus gave was one of the most profound lessons on morality in history. He answered with the parable of the Good Samaritan. It’s a story that we’ve become so accustomed to hearing in church that it is possible we’ve lost sight of just how radical it is.

The traditional interpretation of ‘love your neighbour’ was that it applied to the people of Israel. In other words: ‘we need to look after our own’, or ‘charity starts (and ends) at home’. Yet Jesus defines who our neighbour is not by tribe, race, nation, or even religion, but by need.

Your neighbour, Jesus says, is whoever needs help – though there is a twist, which we will see later. We can see this being put into practice in the feeding of the five thousand (Matthew 14:13-31). The disciples want to send the hungry people away, essentially saying ‘let them take care of themselves’. But Jesus says, ‘You feed them.’

But Jesus’ parable goes even further than just helping people in need. The fact that Jesus chose a Samaritan – someone outside of the nation of Israel and from a people who were despised by the Jews (and vice versa) – to demonstrate what it meant to love your neighbour, was extraordinary.

By doing this, Jesus radically expanded ‘neighbour’ to encompass people outside of our normal social, ethnic, geographic and religious spheres. Help isn’t bound by locality, or by loyalty to our ‘group’.

By having the priests pass by on the other side in the story, Jesus sent a message that was echoed in the book of James: ‘Religion that God our Father accepts as pure and faultless is this: to look after orphans and widows in their distress and to keep oneself from being polluted by the world.’ (James 1:17). Ironically, the excuse that the priests gave was that they didn’t want to ‘pollute’ themselves by touching someone who was ‘unclean’. Jesus shows us that real pollution of the soul is to not help when help is needed.

The Good Samaritan, therefore, calls us to break down traditional boundaries and expand perceived borders. Our ‘neighbour’ is simply someone in need – whoever they are.

Jesus developed this idea throughout his teaching, perhaps most strikingly in the parable of the sheep and the goats:

‘They also will answer, “Lord, when did we see you hungry or thirsty or a stranger or needing clothes or sick or in prison, and did not help you?” He will reply, “Truly I tell you, whatever you did not do for one of the least of these, you did not do for me.”’ (Matthew 25:44-45) 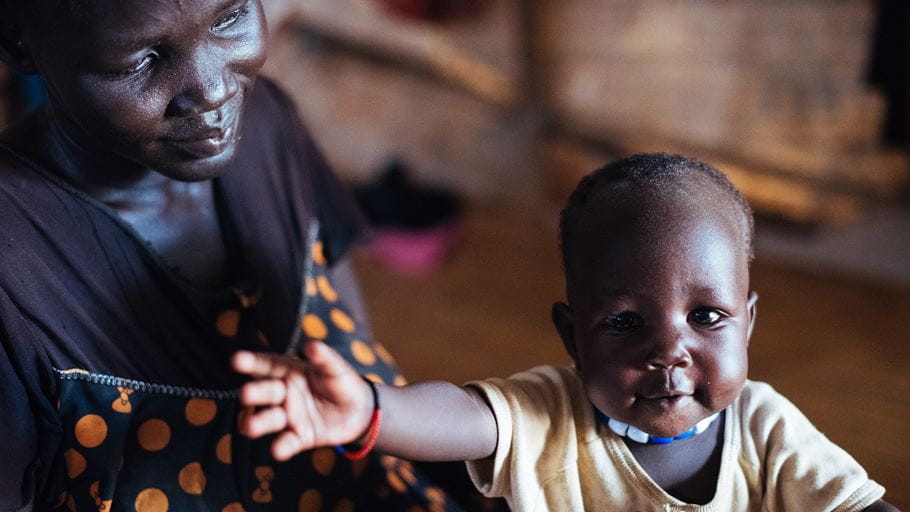 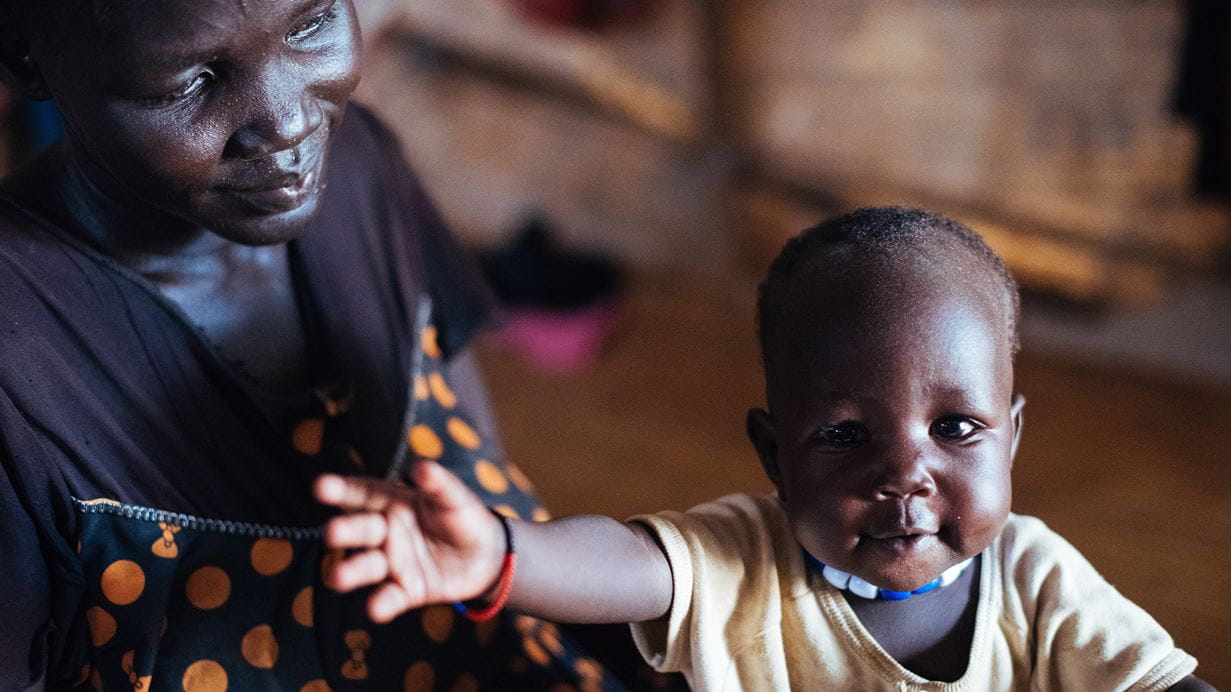 Here, Jesus does not define righteousness in terms of belief or creed, but in terms of how much we are helping, in practical ways, those who are hungry, thirsty, impoverished, sick and imprisoned.

Tearfund was born out of this idea. In the 1960s, the advent of television meant that footage from famines in sub-Saharan Africa was seen en-masse by the British public for the first time. There was an outpouring of compassion for people who lived thousands of miles away, and Tearfund was set up to channel this. Today our mission is still to ‘follow Jesus where the need is greatest’, as we believe believing this to be an integral part of how we live out the good news of Jesus Christ.

The idea of breaking down barriers and expanding borders is central to the Biblical narrative. An ever-widening inclusion is at the heart of God’s story – a narrative of broadening our definition of ‘neighbour’ to ultimately include all of creation.

It begins with Abram – the father of Israel. With God’s prompting, Abram (later Abraham) leaves what he knows to go to a distant and unfamiliar land:‘Go from your country, your people and your father’s household to the land I will show you.’ (Genesis 12:1). He goes from place to place, building altars as he goes. He is stretching the borders of his, his family’s and ultimately his people’s experience.

Once the people of Israel were established, God became almost obsessively concerned with his people looking after the needs of the ‘stranger’: the hebrew words ‘gûr’ and ‘gēr’, which are also translated as ‘alien’, ‘foreigner’, ‘sojourner’ and ‘newcomer’.

In the first five books of the Bible, ‘gēr’ appears almost 50 times. In Deuteronomy, a book of law, God specifically calls upon Israel to ensure that they provide for people who are not their own; for example, the requirement that a percentage of the harvest be set aside for widows, orphans and, importantly, strangers (Deuteronomy 14:29, 26:12).

Entrenched in God’s law is the need to look beyond the needs of your own tribe.

The prophets – Isaiah, Jeremiah and Amos in particular – channeled God’s fury when they saw that this wasn’t being taken seriously. They saw that people on the margins and beyond were being ignored, and declared God’s opposition to those responsible (Isaiah 1:11-17; Amos 5:21-24; Jeremiah 22:3-5).

God opposes those who oppress; God turns away from people who turn away from others in need. This could not be more clear in scripture – both in the Old and New Testaments.

Jesus takes this thread to its ultimate conclusion. When he prophesied the destruction of the temple (Luke 21:5-6), he wasn’t only speaking in the literal sense. Nor was he just talking about dismantling the religious systems that sustained the sacrificial system.

The temple had come to symbolise exclusion. It represented an attitude of ‘us and them’ – God’s chosen few and everyone else. Jesus said: enough of that.

Jesus embodied this by constantly reaching out to the marginalised, to people whom society would normally declare ‘unclean’ or, in modern parlance, ‘someone else’s problem’.

In the sermon on the mount, Jesus says, ‘If you love those who love you, what reward will you get? Are not even the tax collectors doing that? And if you greet only your own people, what are you doing more than others? Do not even pagans do that? Be perfect, therefore, as your heavenly Father is perfect.’ (Matthew 5:46-48)

To be ‘perfect’ is to stretch the bounds of our love to include those who are not ‘our people’. 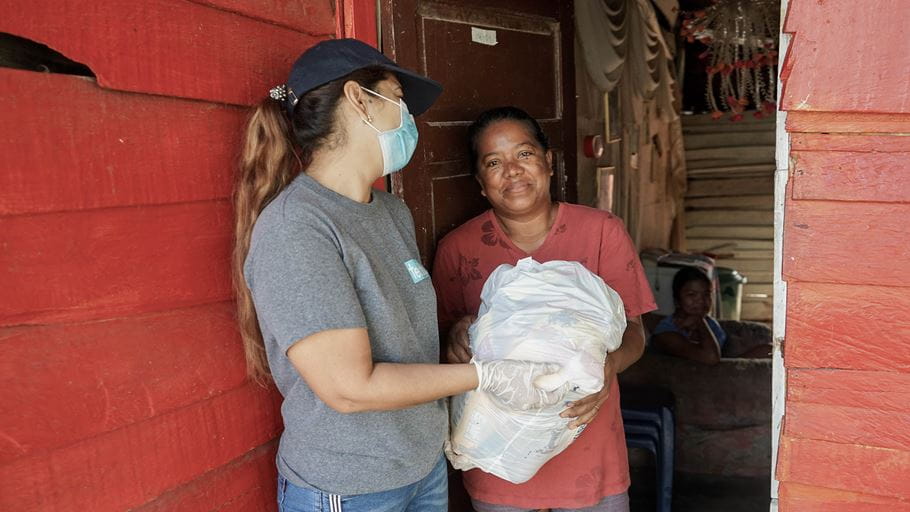 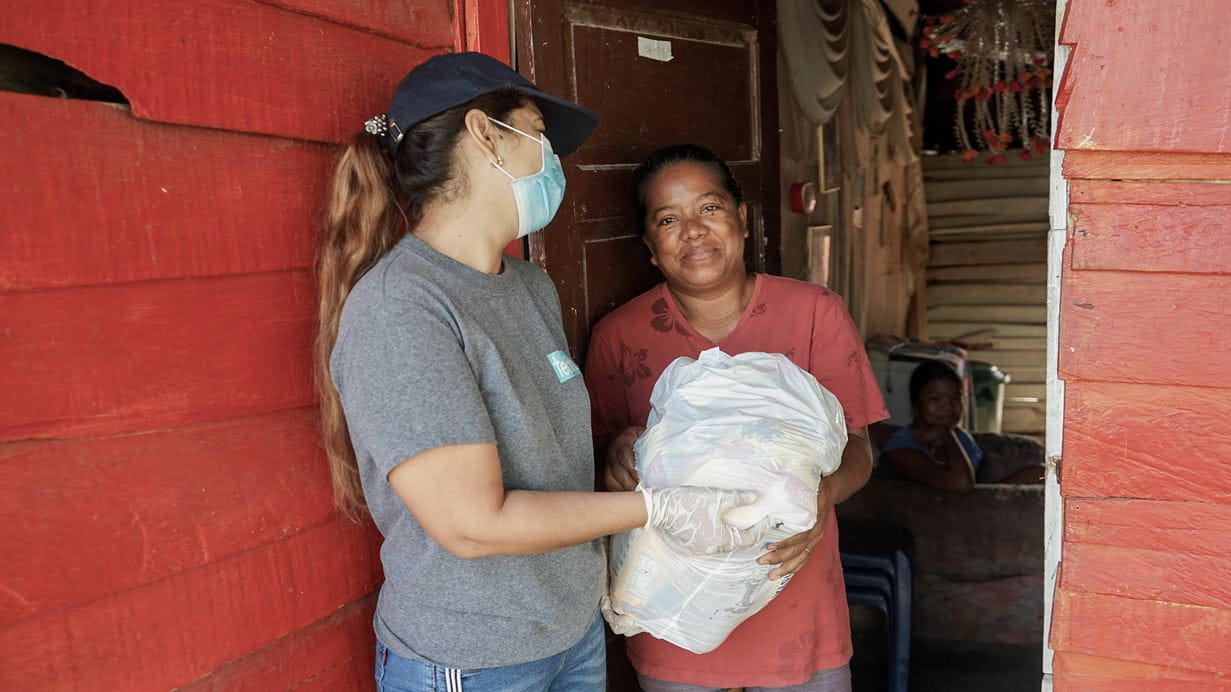 This narrative of expansion was powerfully symbolised in the moment the veil in the temple was torn in two (Matthew 25:51) – another barrier broken, another border expanded: the boundlessness of God revealed so that we ‘are no longer foreigners and strangers, but fellow citizens’ (Ephesians 2:19) in the creation-wide dwelling of Christ, in whom ‘all things hold together’ (Colossians 1:17) .

The apostles continued Jesus’ work of expansion, emphasising the need to do away with divisions of race, social status and gender (Galatians 3:28) – all of which reflecting the fact that we are all, equally, made in the image of God (Genesis 1:27).

To ‘look to our own’, therefore, means to look to everyone. There is no ‘local’ in God’s kingdom.

Who is my neighbour?

Going back to the parable of the Good Samaritan, it’s interesting to note that Jesus never explicitly answers the question.

Instead, in true Jesus style, he turns the question on its head, and after telling the story asks the questioner another question:

‘“Which of these three do you think was a neighbour to the man who fell into the hands of robbers?”

‘The expert in the law replied, “The one who had mercy on him.”

Go and do likewise. Jesus’ ultimate answer to the question ‘who is my neighbour?’ is to say ‘You are the neighbour.’ It becomes not just a philosophical point but a call to action – a rallying cry to the church to go out into the world and be neighbours to whoever is in need.

So it turns out that charity does start at home – because it starts with you, and the steps you take to be God’s hands and feet in the world.

Help us God to be good neighbours – to look outward instead of inward, to follow Jesus’ call to take action.

Dr Ruth Valerio is a theologian, environmentalist and author, and leads Tearfund’s global advocacy and influencing work. Gideon Heugh is a poet and a senior writer in Tearfund’s communications team.