Tearfund’s Gideon Heugh recalls a powerful encounter in Malawi, and shares how the church is helping to restore people’s dreams.

It was only after the interview ended that I noticed it had been raining. I’d been so absorbed in Victor’s story, so moved by his words, that I’d stopped taking notice of the world around me. I said a heartfelt thank you, turned off the dictaphone, wiped the rain drops off my glasses, then walked away.

I needed to find a quiet spot where I could cry.

It’s February 2020, and I’m in a small village in rural Malawi. It’s taken hours of driving through the countryside to get here – countryside that, for now, at the end of the rainy season, is lush and green. If you didn’t know the story of the people here, it would feel like paradise. There are butterflies everywhere, and an abundance of colourful birds flitting among the trees that surround the village.

But the beauty only serves as a grim contrast with what people like Victor are going through. 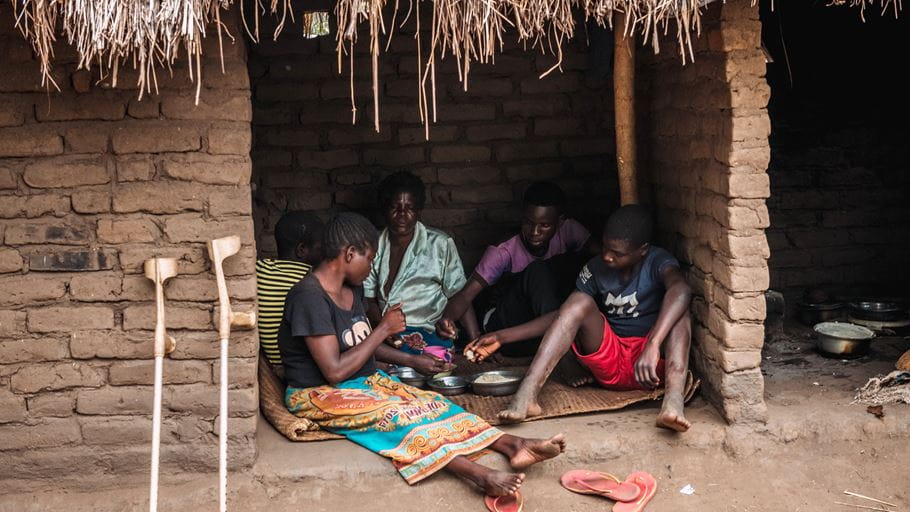 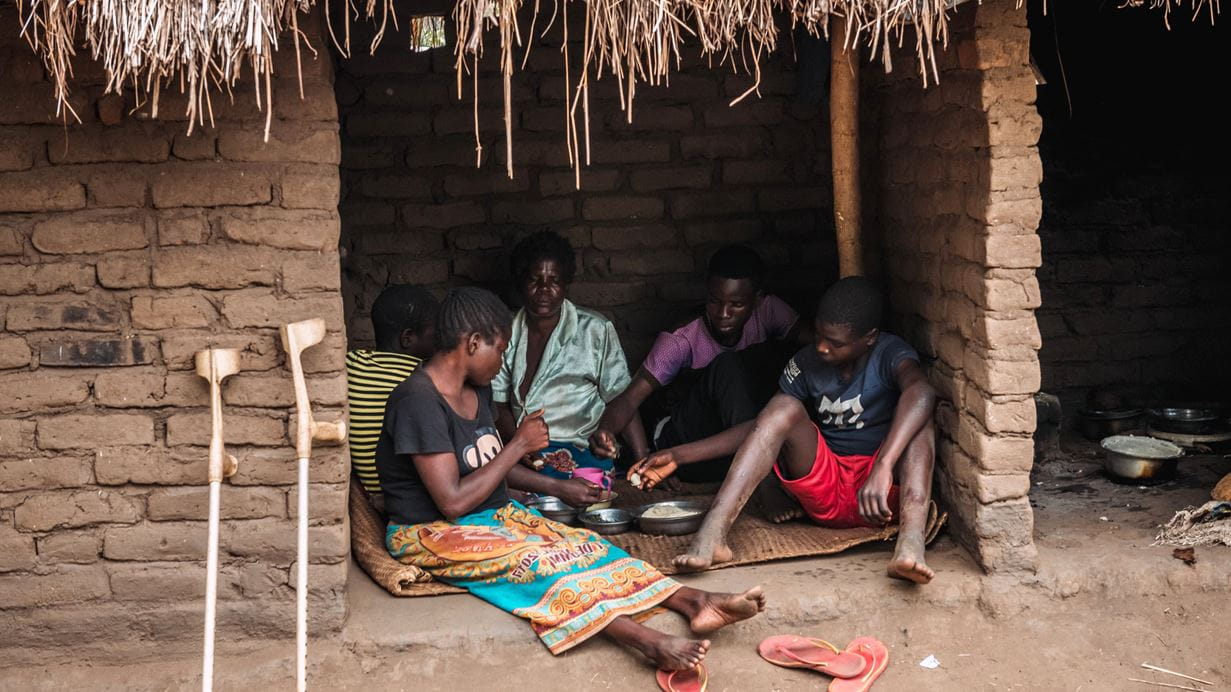 Victor and his family share a meal in their home

Victor is 19 years old. He should be finishing school, but he’s far behind. His father died when he was young; his mother is living with HIV; and his sister is partially paralysed having contracted malaria when she was little.

The family, like many in Malawi, live off the land. Except the land isn’t letting them live.

The nearby river has been flooding. Increasing levels of rainfall due to climate change, combined with deforestation upriver, mean that it is bursting its banks on a frighteningly regular basis. When it does, it destroys the crops of maize that Victor and his family rely on.

‘Climate change is real,’ Victor tells me. ‘It’s a fact: the weather is changing. We receive excessive rainfall in a very short period. These rains cause flooding and bring diseases that affect our crops. We are seeing this happening a lot. Also, sometimes we have dry spells when there is excessive sun without the rains. This also affects our crops.’

So, instead of being at school, Victor has to work to help his family survive.‘I am at home while my fellow students are learning,’ he says. ‘Even if I find work, when I go back there is a big gap. I know that my future is being destroyed because of that. How will I take care of my mother when I'm not educated?’

He wants to become a doctor, so that he can help people like his mother and sister. He lights up when he talks about it. However, with the possibility of finishing his education seeming increasingly remote, that dream is fading fast.

But fading dreams aren’t part of God’s plan. God wants people like Victor to thrive. And, as God’s church, we have the capability to make it happen. 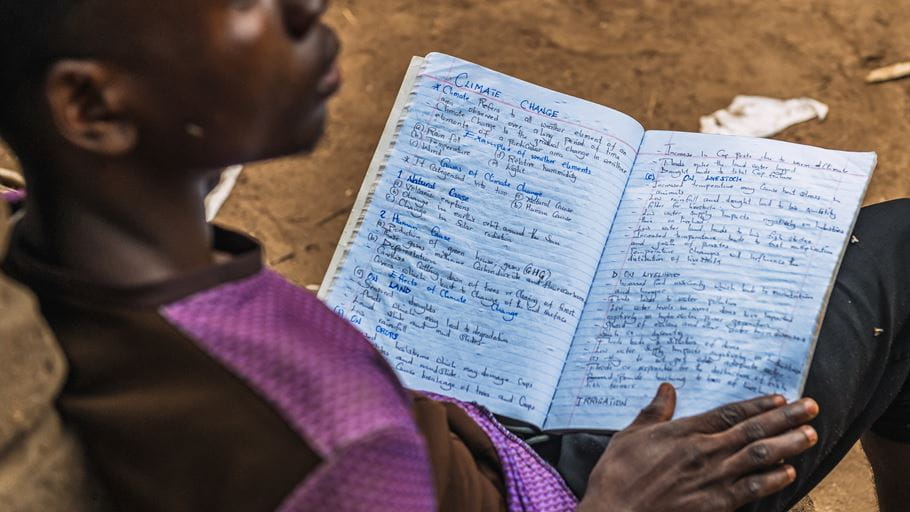 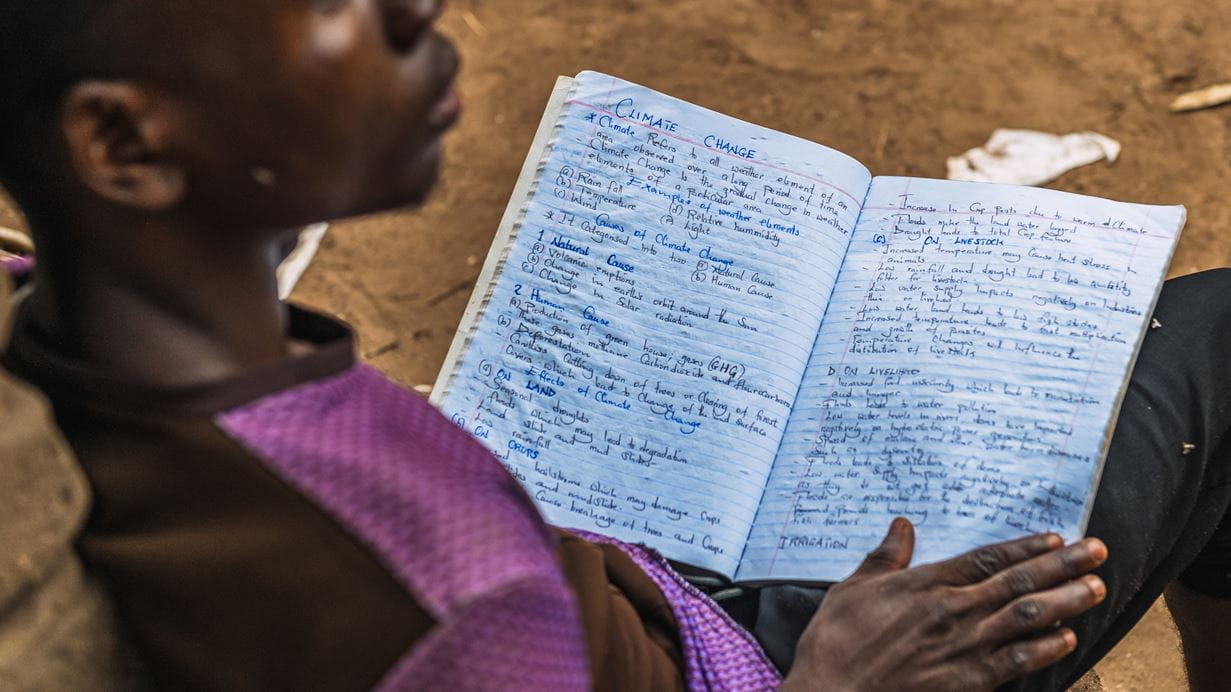 When he's been able to attend, Victor has been learning about climate change in school

Tearfund’s church partners in Malawi are working in communities like Victor’s. They’re helping to reverse the deadly deforestation – creating income opportunities like forest beekeeping along the way – and are also training people in new farming techniques that are both more productive and more sustainable.

I’m often reminded of Victor: his passion for his family, and his despair. It wrenches my heart, but I take comfort in knowing that the church is there. ‘In the years to come, I want my family to be an empowered family, a standalone family doing everything on its own, without relying on other people's help,’ he says. I have faith that, one day, his dream will come to pass.

To help empower people like Victor around the world, please consider giving to our Christmas Appeal.

Tearfund’s Gideon Heugh recalls a powerful encounter from a trip to Malawi, and shares how the church is helping to restore people’s dreams.