Choose the world you want

What has Fairtrade got to do with tackling the climate crisis? 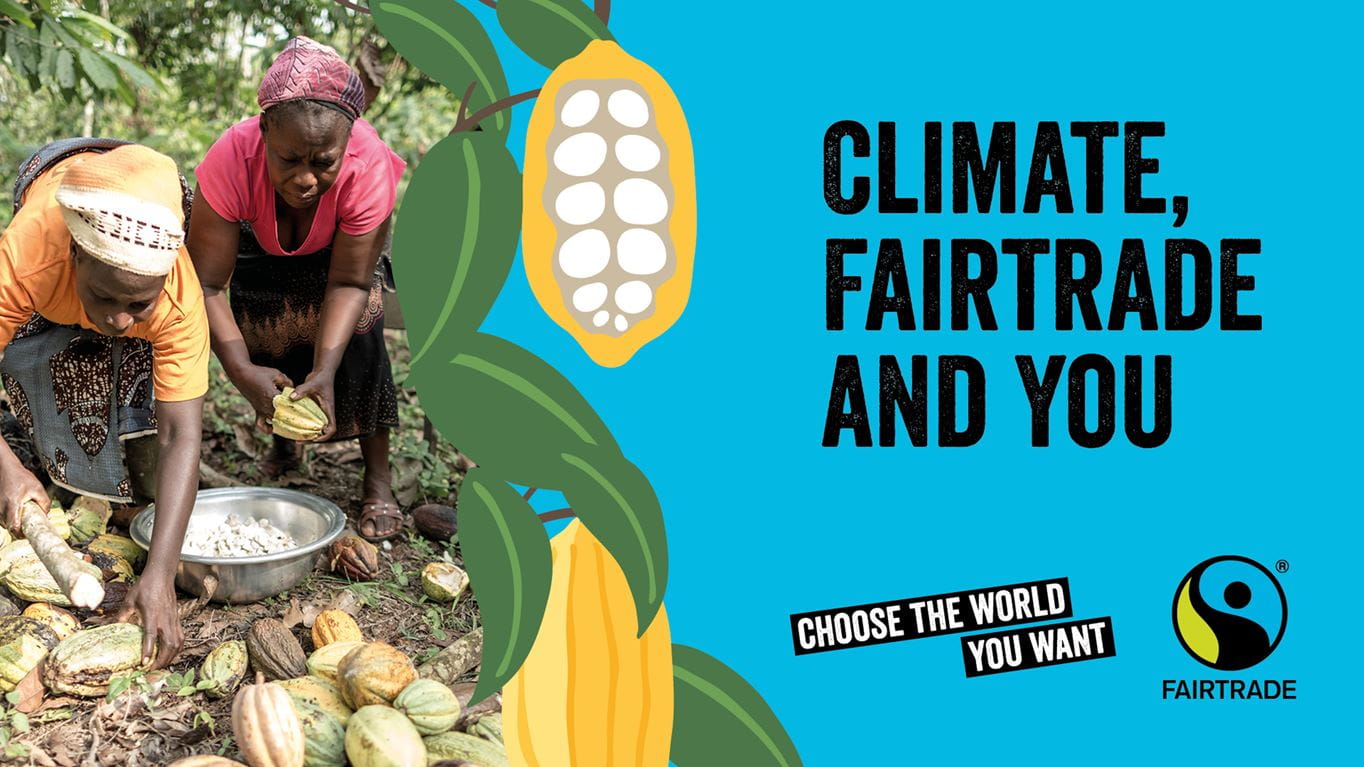 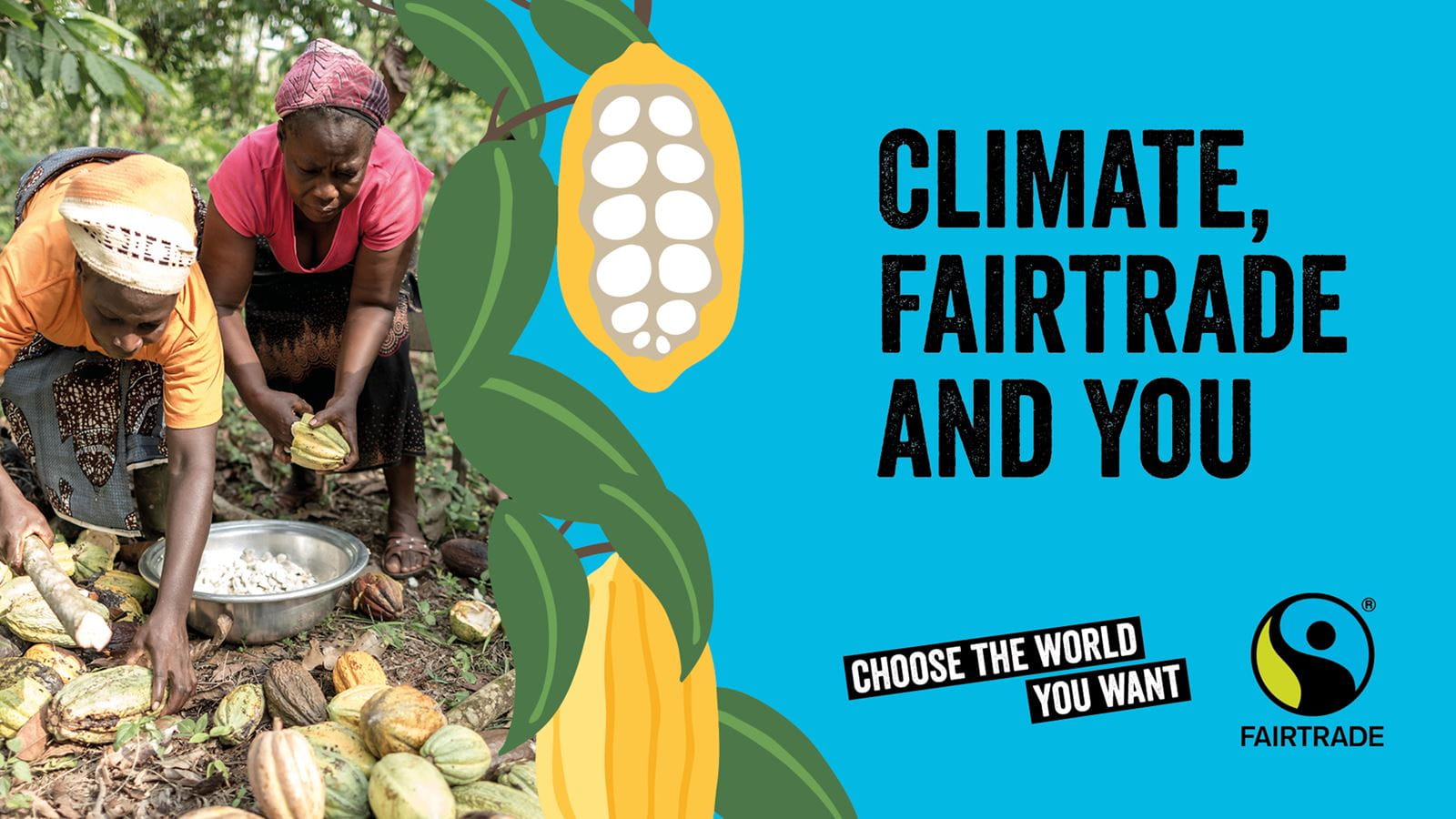 For almost 30 years, farmers and producers in the most climate-vulnerable countries have been the fundamental reason that Fairtrade exists. Churches and Christians have often led the way in establishing and supporting fair trade initiatives such as the Fairtrade Foundation, and they continue to do so. Read on to hear some of their stories and their motivation for getting involved.

The climate crisis is now one of the biggest threats to the livelihoods of millions of small-scale farmers and agricultural workers in low-income countries. These communities have done the least to cause the climate emergency and are least able to deal with climate disasters. The average income for many cocoa farmers is currently 74p per day, less than half of what is considered a living wage.

At COP26, 1.8 million Fairtrade farmers and workers called on world leaders to make good their promises of financial support for the people who are bearing the brunt of climate change. The response to this plea was inadequate. So we continue to support these farmers, by buying fairly traded goods and by campaigning for climate and trade justice.

When we buy Fairtrade goods, we know that the farmer gets a fair price, and the goods have been produced sustainably and without child labour. The farmers can use the extra money they receive to make choices about how best to deal with the climate crisis they are facing.

Kinross Parish Church is a Fairtrade Church, they’ve had a Traidcraft stall for many years and they recently became an Eco-Congregation. Supporting Fairtrade is an important part of their efforts to care for God’s creation, says Karena, a member of their Eco-Congregation Group.

‘As well as holding a stall in the church, we also spread the word in the local community by holding stalls at Kinross Farmers’ Market. I spoke at our local Climate Café about Fairtrade, and we brought it into our creation-themed services in September. Buying Fairtrade goods on its own is not enough: we must also look at the many ideas in the Climate Emergency Toolkit to tackle climate change. But [Fairtrade] is a step we can all take.’ 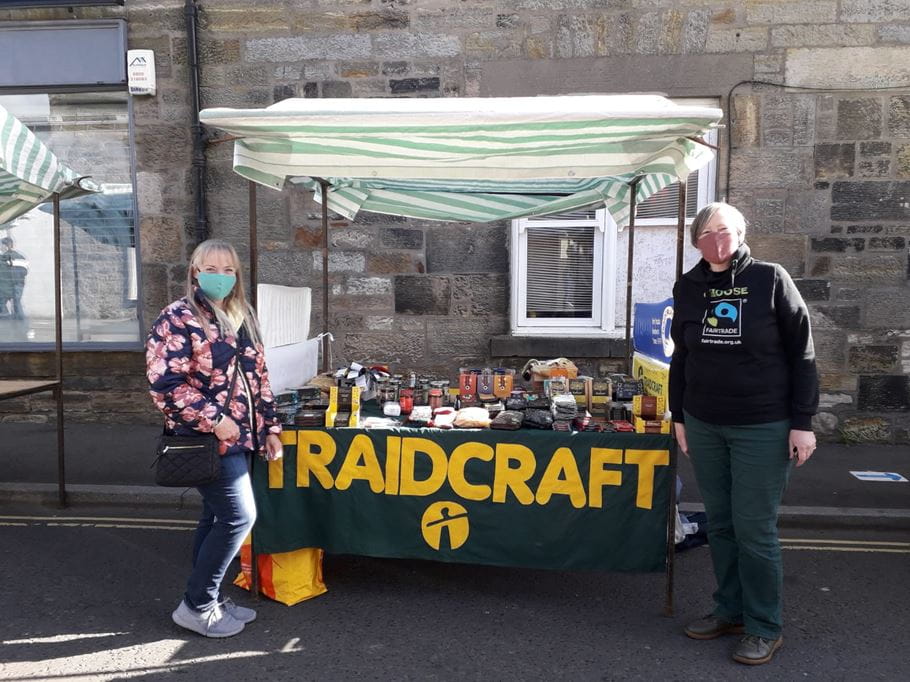 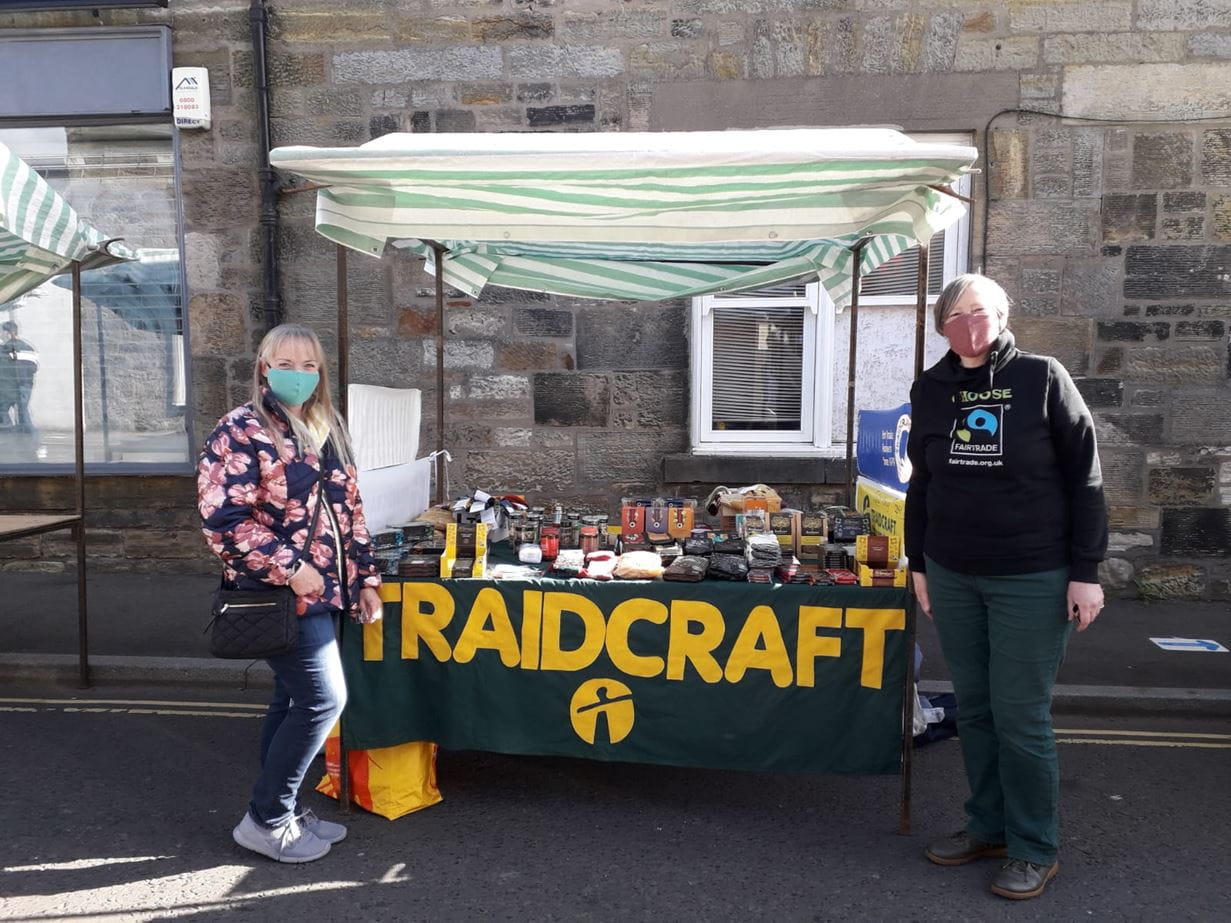 Karena (right) with Fairtrade stall at the farmers’ market

Meanwhile, in Macclesfield Tearfund activist Karen has been a fair-trader for 30 years. She has a regular Traidcraft stall at her own church and occasional stalls at other churches and events. Since 2005 she has been a volunteer at Fair4All, a fair trade shop in Warrington, and she’s given talks in churches, schools and children’s groups about fair trade and justice.

Karen says: ‘Before I was a Christian, I was concerned about the unjust conditions and wages for workers who produced things I ate and used. Becoming a Christian in my late teens gave me a greater impetus to do something about it. The existence of Fairtrade for me was a blessing and a relief, as it meant there was a much better alternative. By running stalls at church and supporting the Fairtrade shop, I’m not only benefiting the overseas producers but giving people here an opportunity to “act justly and love mercy”.’ 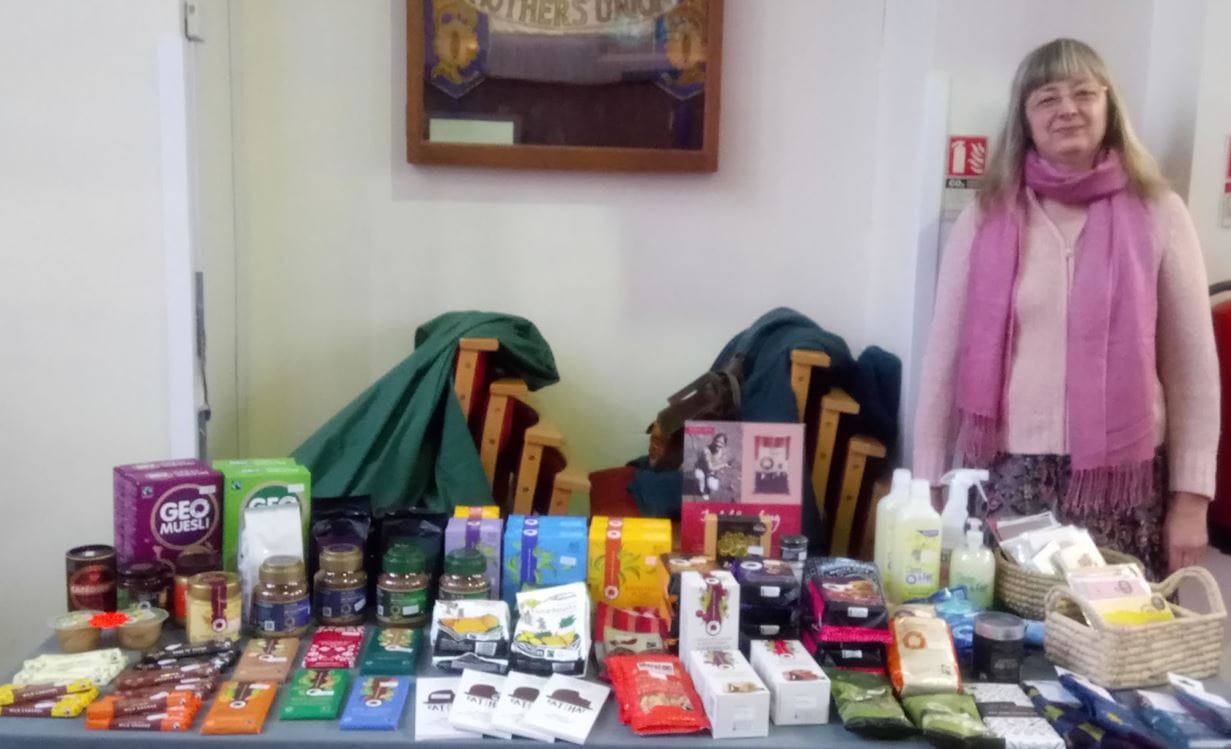 Karen with a Traidcraft stall at Holy Trinity Hurdsfield

Mandy in Leicestershire started selling fair trade before the Fairtrade Mark even existed – after someone mentioned Tearcraft (Tearfund’s former fairly traded goods company). It was the start of a 40-year journey. Her business fair2all has grown from circulating a catalogue to having a shop stocked with more than 12,500 products.

Mandy says: ‘I could write so much of the privilege of a growing awareness of God’s love for the poor and desire for justice, of the study visits with Tearfund that penetrated my heart to use all that I am to play my part in bringing about God’s kingdom on earth. I am thankful for how God has led me to make the world a fairer place.’

Mandy sent us one of her favourite fair trade craft photos, showing the difference our purchases of fairly traded crafts can make. The artisan is proudly pictured with the recycled bike chain picture frame he made, in front of the toilet he was able to build because of the money he earned selling fairly traded goods. And the planet also benefits - the picture frames are now shipped by GoodShipping using biofuels, which meant in the first half of 2021 Shared Earth (who imports them from India) saved 23 tonnes of CO2e (WtE) on their shipping. 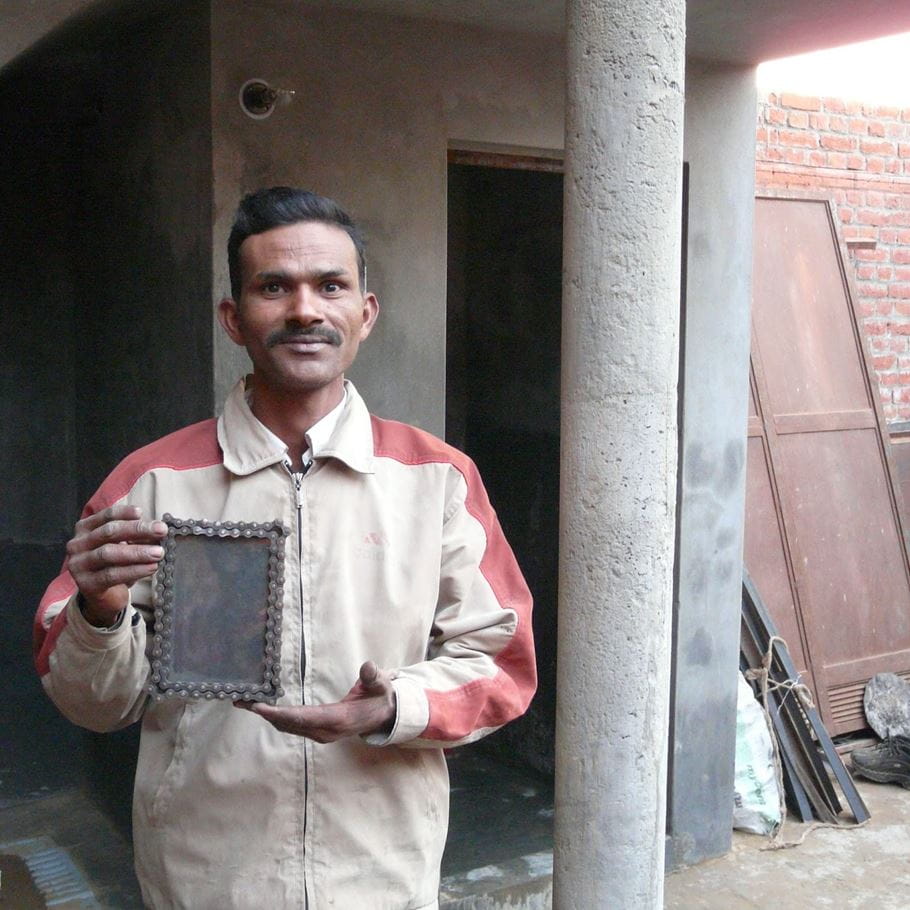 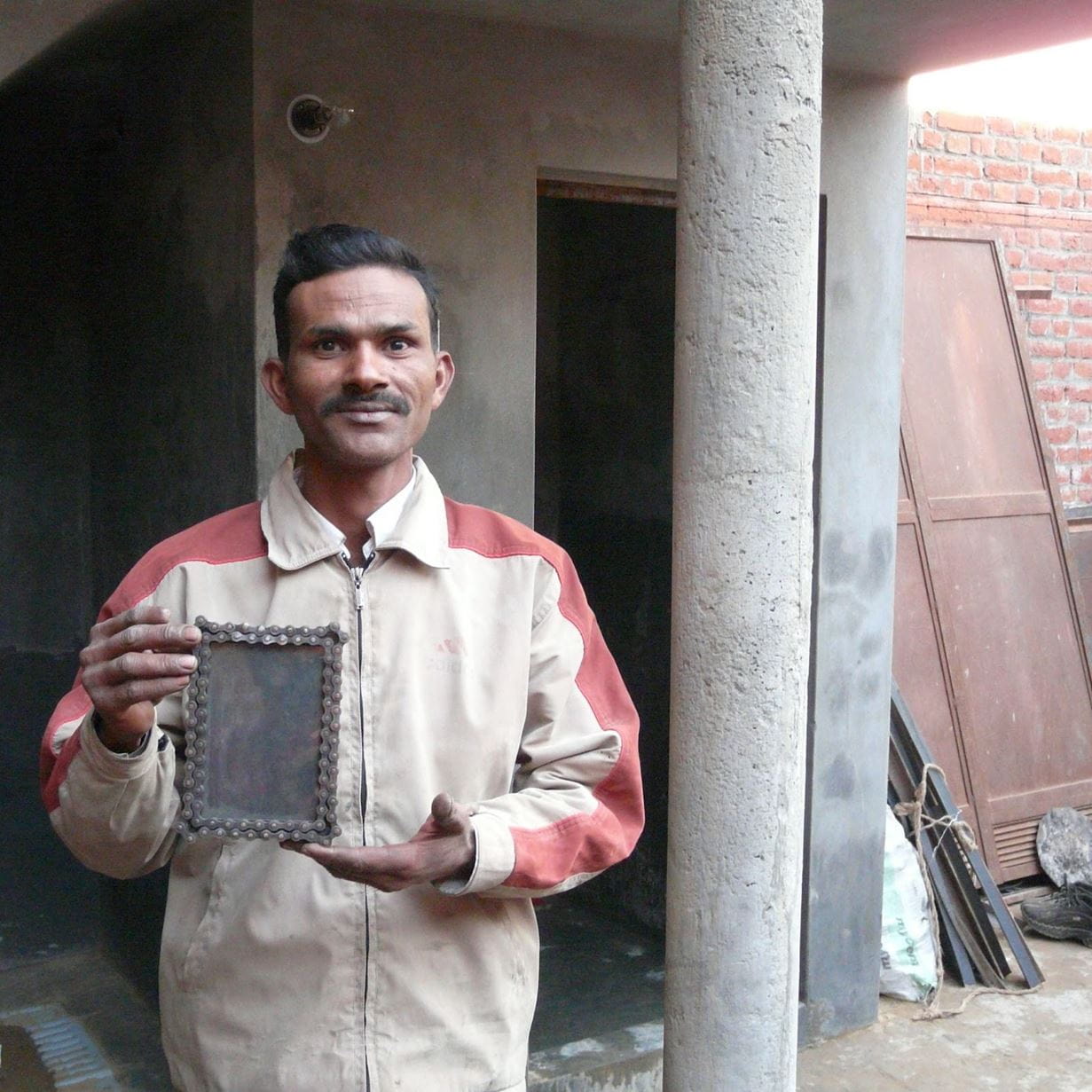 So this Fairtrade Fortnight, why not join Karena, Karen and Mandy in loving our global neighbours and caring for creation by buying products with the Fairtrade Mark?

To get your church involved, why not check out these resources and film suggestions from our friends at Christian Concern for One World?

If you would like to hear more directly from farmers about the challenges they are facing and the benefits of Fairtrade to their communities, or to find inspiring resources including recipes, films and young people’s art, click through to join the Fairtrade Foundation’s online Choose the World you Want festival.