From a house of horrors to a place of peace

Bahati and Noella were living in darkness. But an intervention by their church led to an extraordinary transformation.

Bahati and Noella stand outside of their house in Burundi. Their home is filled with peace now thanks to a Transforming Masculinities programme run by Tearfund’s local church partner. Image credit: Paul Mbonankira/Tearfund

Contains mentions of sexual and gender-based violence that some readers may find upsetting.

A single word totally transformed the lives of Bahati, his wife Noella and their children. The word was ‘peace’. The prophecy in Isaiah 9:6 about the birth of Jesus says he will be called ‘Prince of Peace’. And Bahati really needed a touch of peace from Jesus.

‘I was a shameless adulterer who wouldn’t hide it,’ says Bahati who lives in Gitega province, Burundi. ‘When our first child was born, my love for my wife vanished.’

Bahati went on to have affairs with ‘many women’, he says. He fathered five children with other women. Sadly, they all died.

‘Every time one of them died, I beat Noella – accusing her of being the cause,’ says Bahati. ‘The day I learnt of the death of one child, I took a hoe and tried to kill Noella. She hid behind our son, so I left.’

At Tearfund, we know that poverty and injustice come in many forms and at many levels: in countries, regions, communities and in homes. And we believe the cause of poverty is broken relationships with God, with creation, with others and with ourselves.

The violence and anger that Bahati directed towards Noella left them both broken.

‘I was losing my mind,’ says Noella. ‘I considered committing suicide many times. I was so poor that I couldn’t even get soap to wash. Life was terrible. My husband beat me every single day he was home. Using a belt.’

Transforming Masculinities is a Tearfund programme that encourages positive, healthy behaviour in men, and promotes gender equality to more effectively address sexual and gender-based violence. It focuses on individual behaviour change around gender, masculinity and faith.

Bahati and Noella's local church launched a Transforming Masculinities project with Tearfund partner Fraternité Evangelique du Christ en Afrique au Burundi/Evangelical Fraternity of Christ in Africa in Burundi (FECABU). It offered the couple a potential lifeline. But first, Bahati had to be convinced to attend…

When she returned from the first session, Noella bravely told Bahati that they were teaching how husbands and wives can live well together. Bahati told her she was ‘crazy’. But their son intervened saying, ‘Dad, they were talking about you.’ That cut Bahati to the heart and, at his son’s insistence, he agreed to go.

The masculinities trainers were aware of Bahati’s behaviour, and they put him with a one-to-one facilitator. Bahati learnt from biblical examples about how a good marriage should be characterised by ‘peace and joy’.

A plea for peace

The sessions started to address Bahati’s violent behaviour. A facilitator questioned Noella about what she would ask in return if Bahati sought forgiveness.

‘I expected her to ask for material things, like clothes,’ he says. Noella said she simply wanted ‘peace’.

‘I was moved, I was shaking,’ says Bahati, who later asked his wife for forgiveness.

‘On my knees, I begged her to forgive me for all my infidelities. And for each stroke and slap I administered.’ 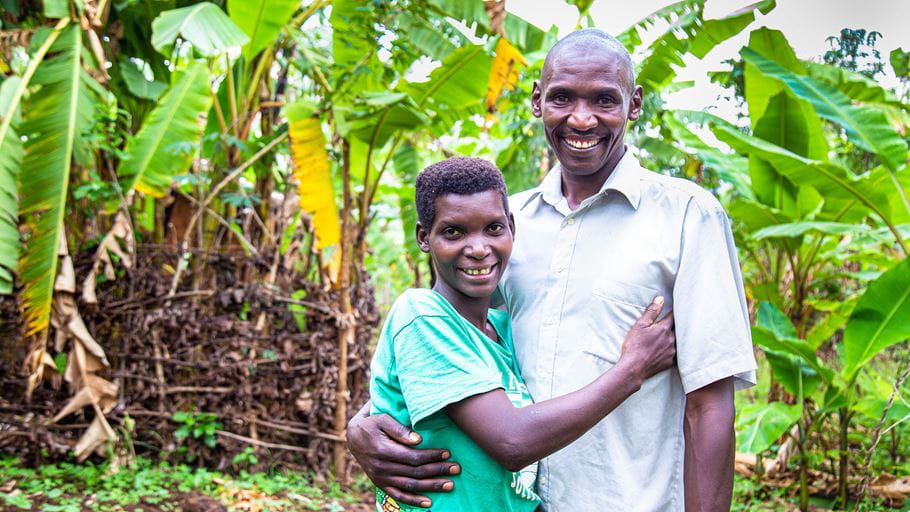 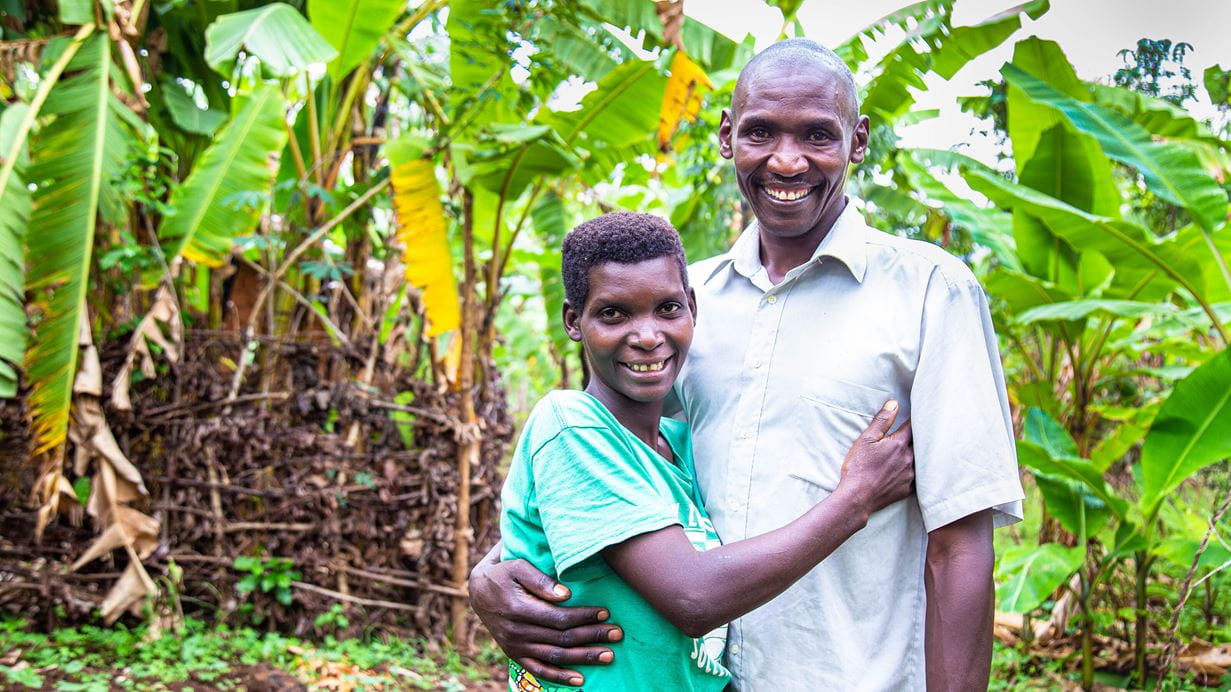 Bahati and Noella’s marriage has been transformed – and their home is now a place of happiness and peace for their family. Image credit: Paul Mbonankira/Tearfund

Thanks to the training, their relationship has been totally transformed.

‘I am happy now,’ says Noella. ‘I’ve gone back to church groups that I abandoned and have joined the choir. There is peace in the house. Our children have food to eat, and Bahati buys clothes for them.’

Bahati has found joy too. ‘When I arrive home now, my children run to welcome and hug me. My wife graciously welcomes me too. I feel like a man, a real one. I teach others about masculinity. I’m a model for the community to show that change is possible. I thank Tearfund and FECABU. I thank God. I am blessed, and so is my family.’

Noella and Bahati shared the following prayer requests with us. Please pray for them and join with us in continuing to pray for an end to male violence against women.

‘I pray that peace will continue to reign in my home, that there will be no more violence and that the day I die will be in peace,’ shares Noella.

‘Pray for me that these teachings will always be engraved in my heart and that peace and joy will reign in my home forever,’ says Bahati.