Why the church must act now on the global food crisis

As we enter the harvest season, time is running out for the millions of people around the world facing famine.

Jaman and his family enjoying a meal prepared with produce from their own field. Image credit: Rabi Rokka (Ray Of Hope Productions)/Tearfund

Across the globe, the cost of food is costing lives. After decades of declining hunger, the last few years have seen a shocking rise. The number of people without enough food to eat reached a grim total of 828 million people in 2021. And the situation is getting worse.

The invasion of Ukraine, along with other conflicts and increasingly frequent extreme weather events, has exposed the fragility of the global food system. Many countries – including Yemen, Afghanistan, Somalia, Kenya, Uganda and Ethiopia – are on the brink of famine. Every day, hunger claims more lives, with children and other vulnerable groups particularly at risk

The time to act is now. 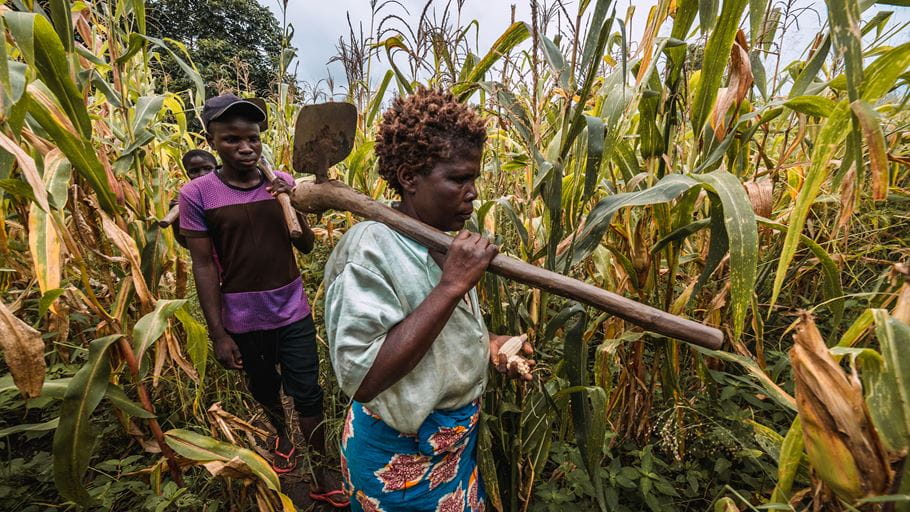 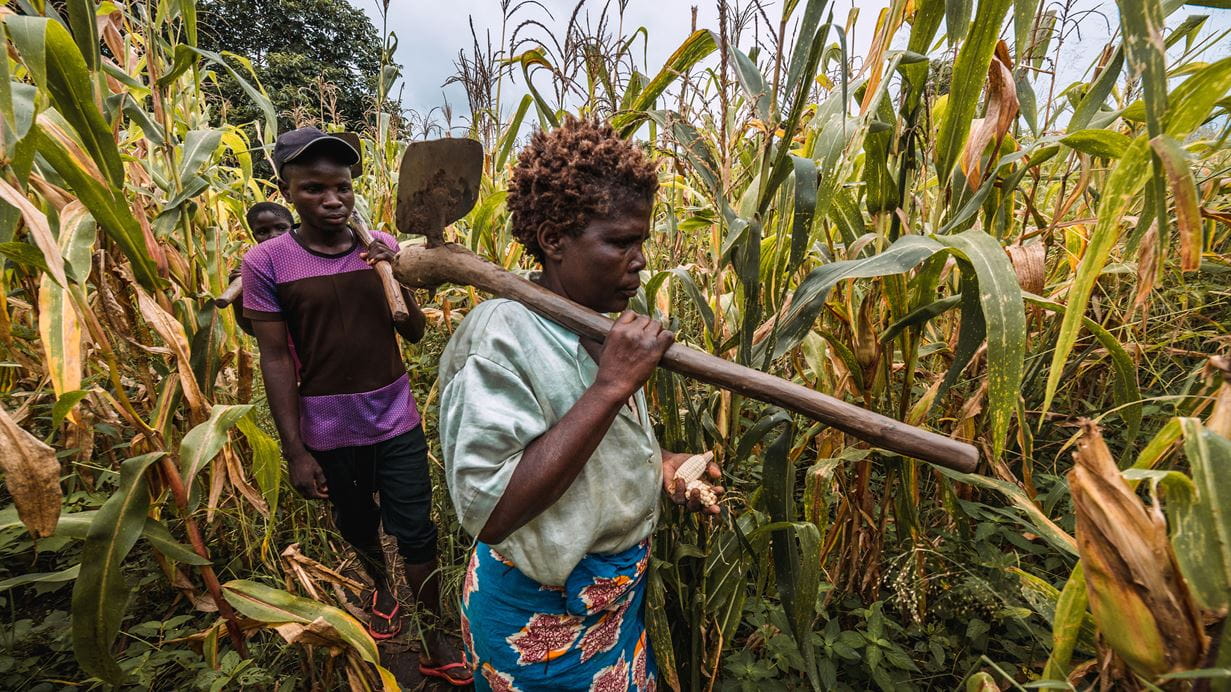 The church has a God-given mandate to safeguard people in need (Proverbs 31:8-9); to feed the hungry and look after the sick (Matthew 25:35-40); and to be unyielding in its support of the marginalised and oppressed (Isaiah 1:17). The church must be united, bold and uncompromising in its response to the food crisis.

The church can – and must – make a difference. If the church fails to respond to this crisis, it has failed to be the church.

In August, a deal was reached between Russia and Ukraine to restart the shipment of grain from ports in the Black Sea. The blockade of these shipments had been driving up food prices around the world – a huge blow for already hunger-stricken countries.

While this deal should be celebrated, it risks masking an uncomfortable truth:The food crisis began well before the conflict in Ukraine. And it would have carried on regardless. Indeed, this breakthrough will not prevent disaster for the world’s poorest.

Even before this year’s invasion of Ukraine, many countries around the world were in the grip of drastic food shortages:

What has caused the global food crisis?

The causes of this crisis are complex, but can be summarised in three interconnected areas: conflict; the climate crisis; and the coronavirus pandemic.

It is not just the conflict in Ukraine that is causing food shortages. Yemen, Afghanistan, Ethiopia and many other countries around the world have seen conflict dramatically increase levels of hunger.

Conflict forces people from their homes and away from their usual sources of food and income. Crops and livestock have to be abandoned or are destroyed. Huge numbers of people then gather in displacement, or refugee, camps. With people’s livelihoods having been lost, there is often a need for humanitarian support. However, another consequence of conflict is that these aid supplies may be cut off – making the problem even worse. 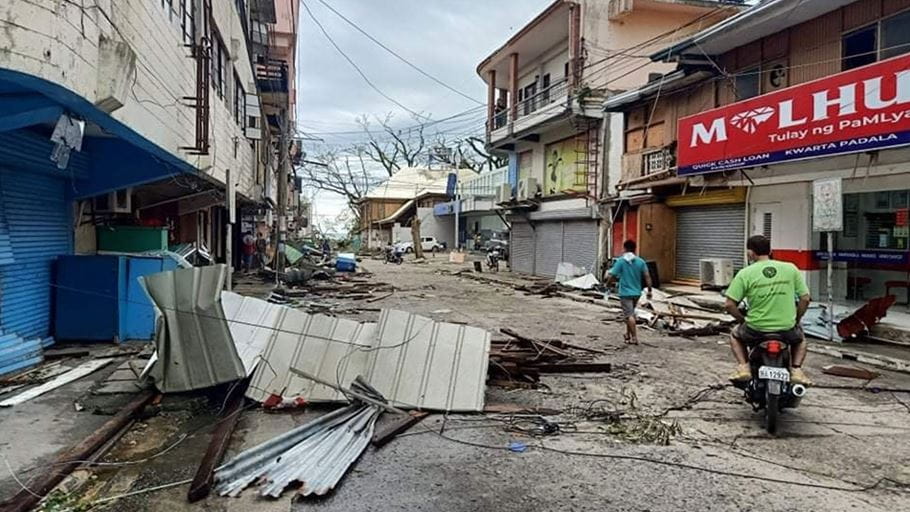 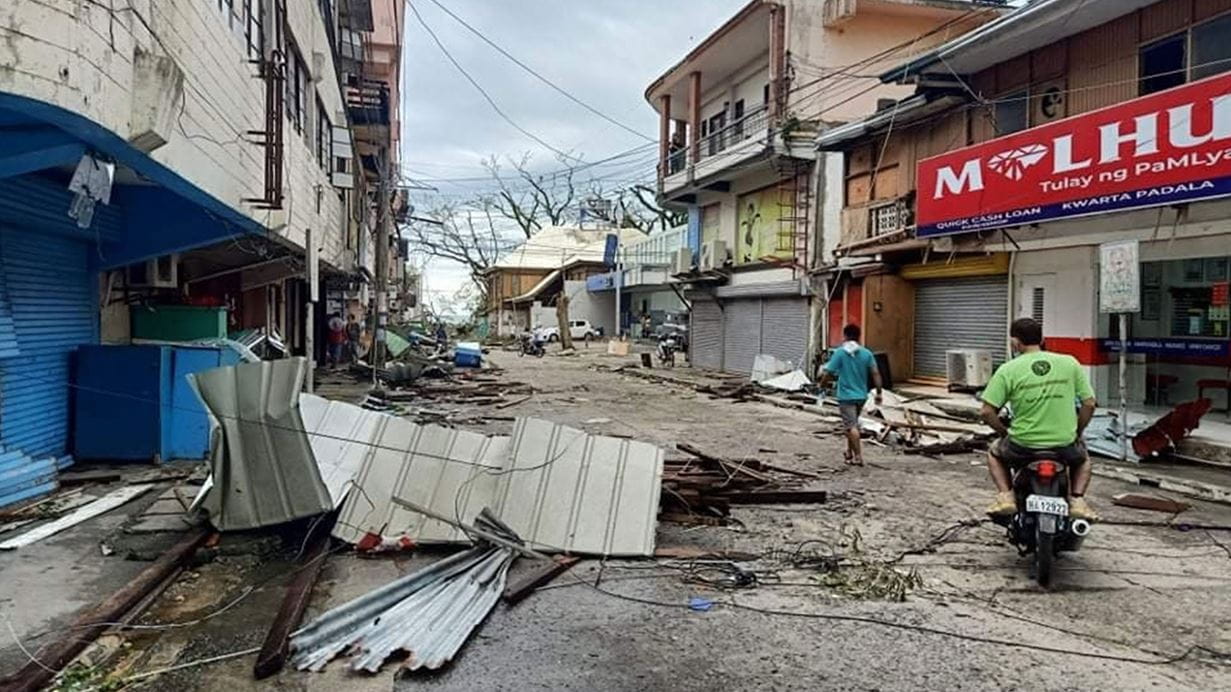 Typhoon damage in Maasim, the Philippines. The climate crisis is increasing the intensity and frequency of storms. Image credit: Pastor Jun Biluan/PhilRads

Droughts. Storms. Flash floods. When it comes to weather, extreme is becoming the new normal. Climate change is a clear, present and persistent threat to people living in poverty – the people who have the least amount of resources to adapt to it.

We can see this all over the world, but at the moment the reality is perhaps most stark in East Africa. This huge region includes Ethiopia, Somalia, Kenya and Uganda. The area is suffering the consequences of a succession of failed harvests – with the unthinkable prospect of more on the way. The rains upon which millions of people rely to grow crops simply aren’t coming. When they do, they tend to be brief torrential downpours that cause flash flooding,  causing even more damage to agriculture. 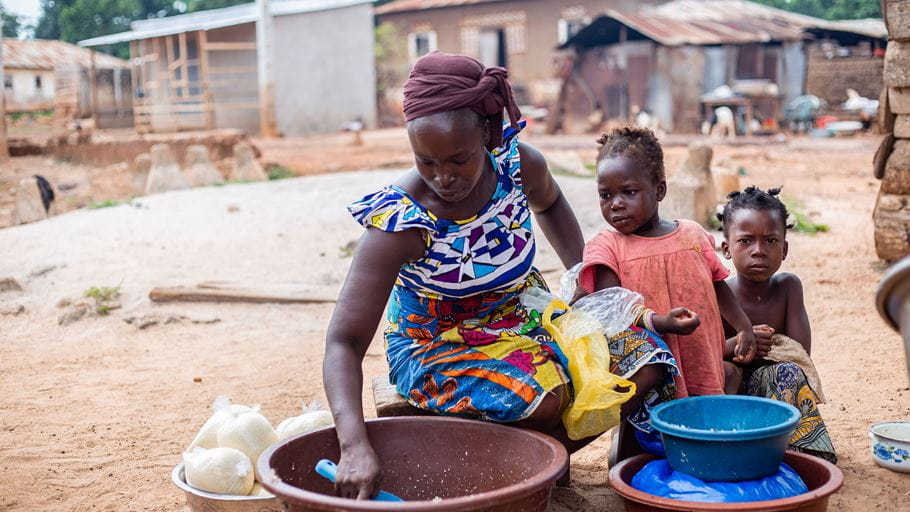 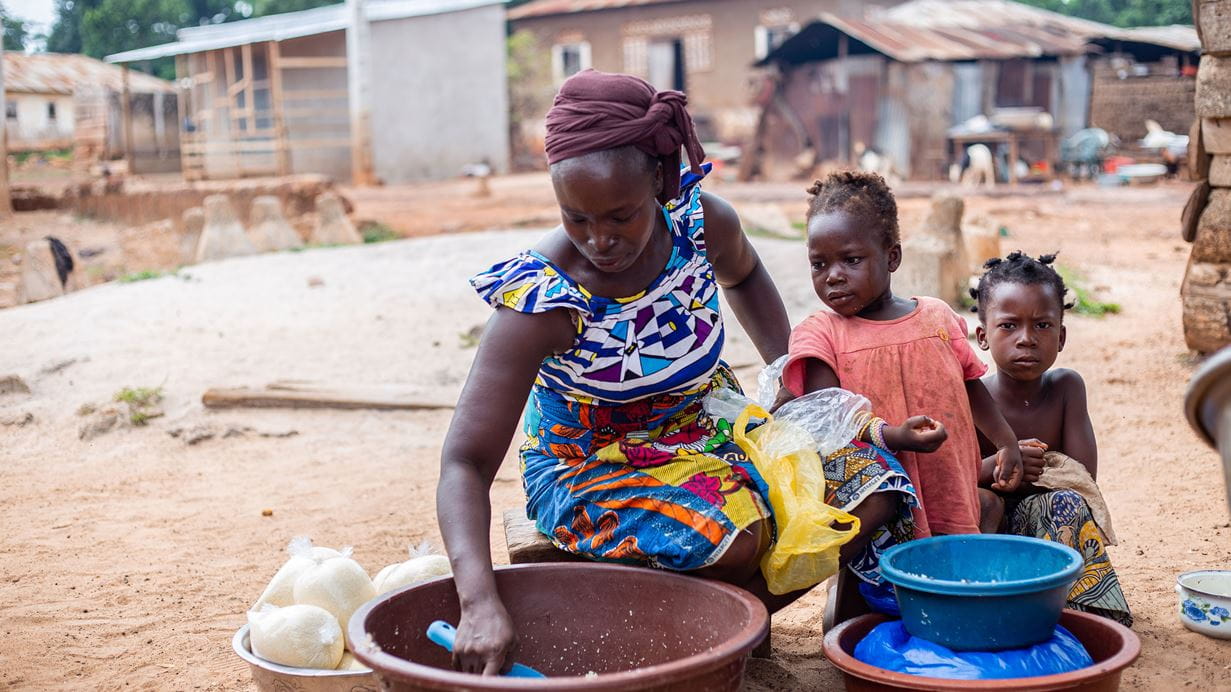 A combination of crises have been raising hunger levels around the world. Image credit: Jonas Yameogo/Tearfund

The coronavirus pandemic has been devastating for many countries around the world who were already in the grips of other crises.

Lockdowns have had a huge effect on people living in poverty. Without the ability to go out and work – and with none of the furlough schemes that wealthier countries were able to provide – what little income people had completely dried up. Food supply chains were also disrupted as international travel became more complicated.

What does the Bible tell us about the food crisis?

When confronted with injustice, God’s response can be shocking.

In Isaiah 1:13-15, God describes the people’s religious practices as ‘meaningless’, ‘detestable’ and ‘a burden’. God even states that he will no longer listen to the people’s prayers. Similarly, in Amos 5:21-23, God says ‘I hate, I despise your religious festivals… Away with the noise of your songs!’

Detestable. Hate. Despise. This is God describing not the enemies of God’s people, but God’s people themselves.

What caused God to react in this way? Injustice. Because ‘You levy a straw tax on the poor and impose a tax on their grain’ (Amos 5:11) Because ‘There are those who oppress the innocent’ (Amos 5:12).

Religion is meaningless unless it confronts injustice. And the food crisis gripping the world right now is an injustice on a massive scale.

The role of the church

What does God want from us then?

In Isaiah, God declares: ‘Learn to do right; seek justice. Defend the oppressed. Take up the cause of the fatherless; plead the case of the widow.’ (Isaiah 1:17) And, in Amos: ‘But let justice roll on like a river, righteousness like a never-failing stream!’ (Amos 5:24)

In the New Testament, the writer James summarises it in this way: ‘Religion that God our Father accepts as pure and faultless is this: to look after orphans and widows in their distress and to keep oneself from being polluted by the world.’ (James 1:27) In other words, taking practical action to help people in need.

In the parable of the sheep and the goats (Matthew 25:31-46), the separation between those whom Jesus accepts and those whom he doesn’t is not based on belief, but on action. Specifically, those who are accepted are those who come to the aid of people who are suffering.

This is the role of the church.

The poor will always be with you?

The time was soon coming when Jesus’ physical body would no longer be with his disciples. They would be left with the poor only. Given what we know of Jesus’ teaching about the poor, it makes so much more sense to understand his statement in this way. ‘My physical body will soon be gone and you will not be able to lavish your love on it. But the poor will still be here, and you can lavish your love on them whenever you like.’

Jesus has left caring for the poor as his legacy. If this is what Jesus wants of us (and this is shown through many, many passages of scripture), then poverty is clearly an offence to him.

What can I do to help?

It’s easy to feel helpless in the face of such a large crisis – but you are not helpless, because you are not alone. Working together, the church can be an extraordinarily powerful force for good. This is why Tearfund is so passionate about working through the church – globally and locally.

In 2017, the UK’s action helped to avert the worst of a hunger crisis in eastern Africa, providing £700m of funding. Similar effective and quick action is needed again now.

Harvest is a time to celebrate what we have, and to look at how we can use our blessings to bless others. There are several things you can do today that will make a difference to people in need: 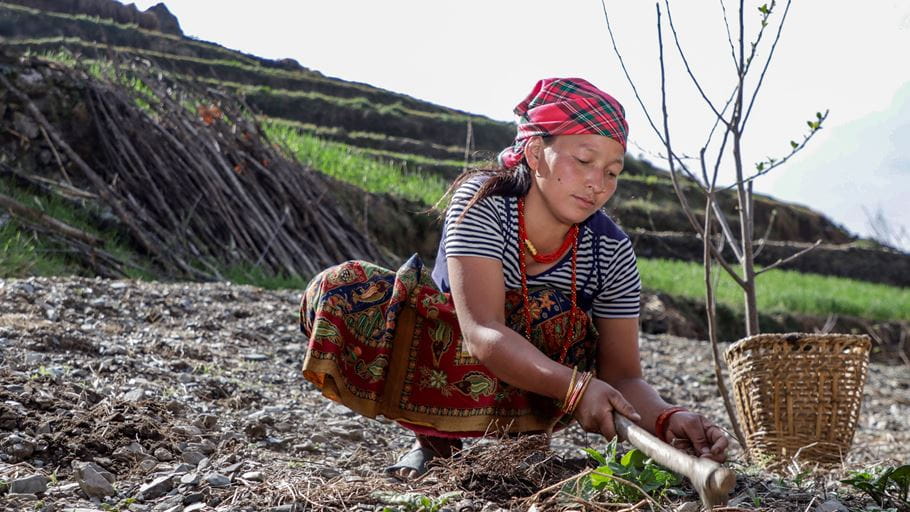 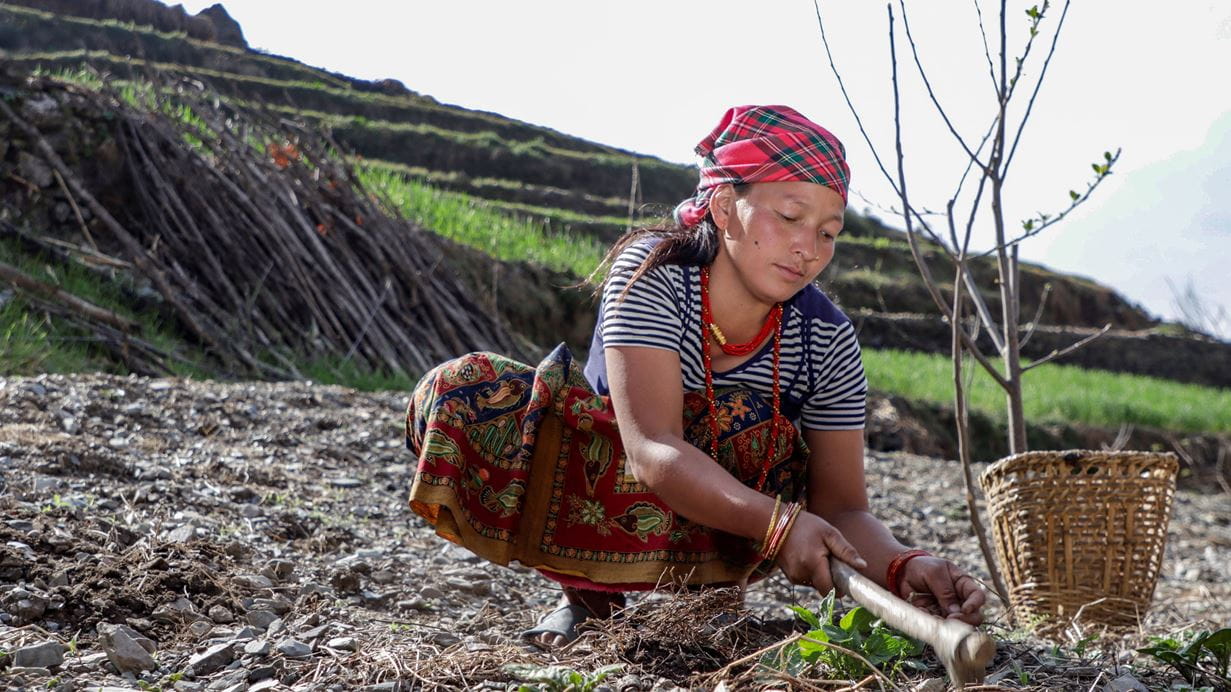 The changing weather patterns in Nepal, made worse by the climate crisis, is making life harder for farmers like Mahima | Image credit: Rabi Rokka (Ray Of Hope Productions)/Tearfund

Donate to our Harvest Appeal

With the world’s attention focused mainly on issues such as the conflict in Ukraine, there is a risk that the needs of the millions of people affected by the food crisis will go unmet.

But your support can help ensure that people living in poverty have what they need to grow and thrive.

Our local partners around the world are working with farmers to give them the tools and training they need to continue to grow food in challenging conditions.

Find out more and donate

Back in 2009, higher-income countries promised to provide $100 billion a year from 2020 to help climate-vulnerable nations adapt to the impacts of climate change. They are yet to fulfil their promises.

Tearfund is calling on the UK Government to influence other wealthy nations to deliver the promised finance – and ensure it reaches the people affected most by the climate crisis.

The church and Christians all over the world can play a vital role in this. Sign our petition here asking the UK Government to tell higher-income nations that it's time to deliver.

Prayer is at the heart of everything we do at Tearfund. Our vision is far bigger than what we can achieve alone. We believe in a loving God who hears and responds to our prayers. Please pray with us now:

You are the Bread of Life.
You are on the side of the marginalised.
You care deeply for those who are suffering.
Your heart is for the hungry.
Your passion is for justice.
Your vision is for a church that does your will on Earth.

We pray for people who don’t have enough food to eat.
We pray for immediate and lasting provision for the hungry.
We pray for peace where conflict is causing food shortages.
We pray for drastic action to be taken to limit the effects of climate change.
And we pray that the church will rise up into its role as a force for good.

Loving God, bring an end to the food crisis.
In Jesus’ name we pray, amen.

If you would like to continue with us in praying for people living in poverty, you can receive prayer updates straight to your inbox through our weekly email One Voice in prayer. Sign up and pray with us here.