Angela Thorne and her family recently spent two weeks in Uganda on a Tearfund Go placement. Living and working alongside Tearfund partner WATSAN, they saw first-hand how access to safe toilet facilities can change lives, particularly for women and girls.

We live in a world where 4.5 billion people don’t have access to their own toilet. But today we are celebrating a move to change this: it’s World Toilet Day! Not to be mistaken for a day to make lavatory-related jokes (or poomour as I like to call it), instead it is an opportunity to celebrate what is being done across the world to ensure that everyone has access to a safe toilet by 2030.

Tearfund partner WATSAN is working with rural communities in Uganda to do just that. On a recent family volunteering placement, Angela, her husband Ben and their five children visited some of WATSAN’s projects that are changing the status quo. 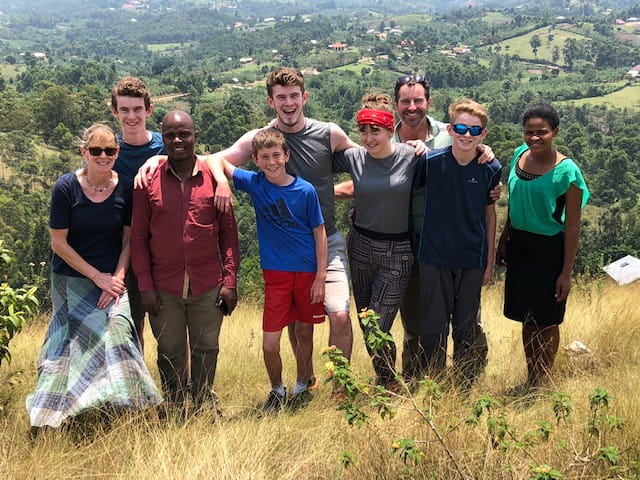 Angela, her husband Ben and their five children.

Every month thousands of young women across the world face staying at home simply because they can’t access a toilet. According to the World Toilet Day website, 20 per cent of schools around the world are without toilet facilities. This is a huge issue for girls during their period. Tearfund volunteer Angela explains how, in Uganda, WATSAN is addressing the problem and restoring dignity to female pupils.

‘During our placement we visited a local school where WATSAN were building toilets for the staff and children. When we were there they were working on a cubicle specifically for the girls to wash in, during their periods. To have privacy for these girls – that’s massive; and to give them self respect and honour. For them to be looked after in that way is really significant.

As well as the impact this project is making, Angela and her family saw how the WATSAN staff themselves are modeling change and hope to the pupils.

‘There were a couple of women on the WATSAN team who came with us. One staff member, Olivius, who was in her early 20s, was with us on the day we visited the school. That was really powerful for the local community – to see a young woman from their culture working for WATSAN alongside our team, advising on projects from a woman’s perspective is really significant.’

‘The reality is that many people we met had relatives who had died from diseases like cholera,’ says Angela. ‘It’s a real eye opener that, for many people, their water source is simply a hole in the ground. We saw there was a lack of awareness of the link between hygiene and disease; so the work that WATSAN does is essential.’

‘Water is essential for life, that’s how significant the projects that WATSAN run are. It’s just impossible to put a value on it.’

Through the work of organisations like WATSAN, we are moving closer to seeing World Toilet Day’s goal achieved – that the number of people without access to a safe toilet of their own will be reduced from 4.5 billion, to zero.

Learn how you can support WATSAN and other Tearfund partners through volunteering with Tearfund Go.