Nigel Harris, Tearfund’s CEO, sees a river of plastic waste in the DRC. And he meets the men and women turning some of it back into something beautiful...

Nigel Harris, Tearfund’s Chief Executive, encountered a river of plastic in the Democratic Republic of Congo (DRC). He also saw a team of men and women turning the waste into something beautiful.

The locals used to call Kinshasa Kin la belle (Kinshasa the beautiful). They were proud of their capital, home to 12 million people. Now they call it Kin la poubelle (Kinshasa the dustbin). Sadly, it was all too easy to see why...

I stood in the middle of the DRC’s capital city next to a river of plastic bottles. The photo really doesn’t give you a full sense of the scale of the build up of plastic waste – the river of bottles stretched far off into the distance.

We were making a short film about the plastic problem. As we stood there filming, a passer-by lobbed a bottle behind me – narrowly missing my head. It was quite unbelievable. But there is little in the way of waste collection in Kinshasa, and local people aren’t aware of the damage it is doing.

Death by plastic
Plastic bottles, at least, usually stay on the surface of the water. But water is also sold in plastic bags – it’s known as water bagging – which are also not properly disposed of. Discarded water and other plastic bags find their way into the pipes, clogging up an already inadequate sewerage system. This often causes floods which leads to sickness and loss of life. 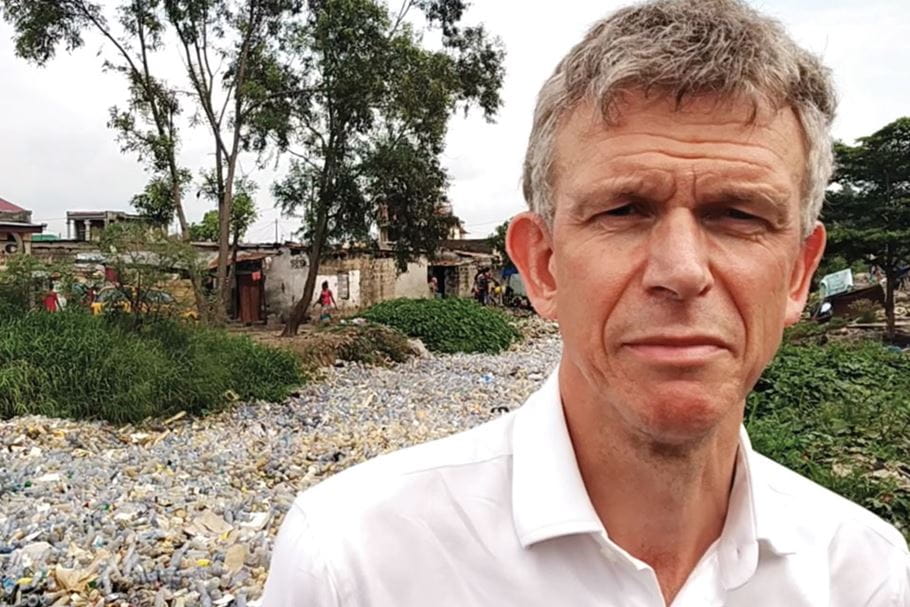 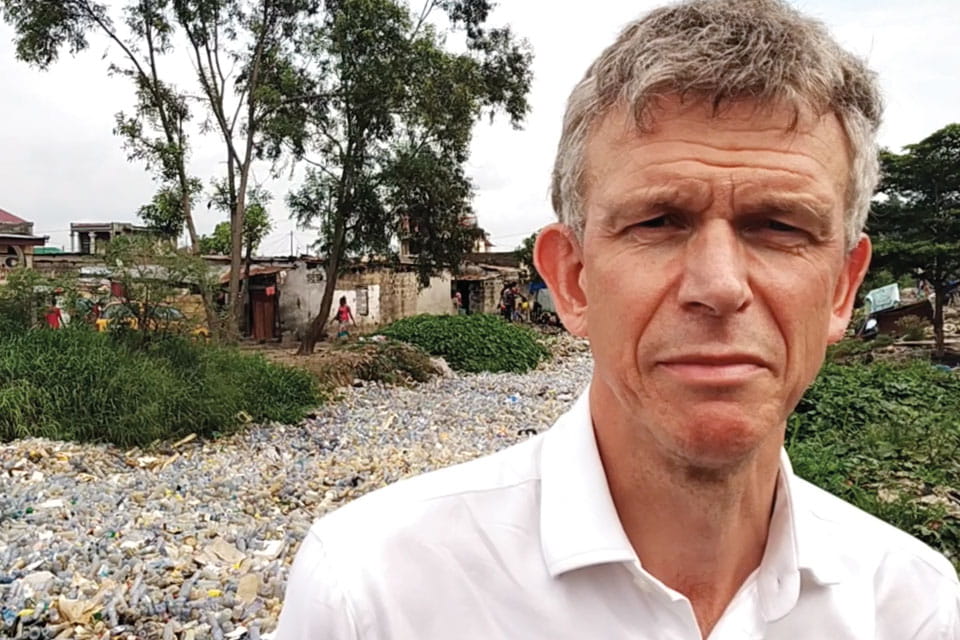 Thankfully, we are all starting to be more aware about how damaging plastic waste is to the environment. Two billion people around the world live and work among piles of waste and it causes up to a million deaths each year.

But the plastic doesn’t just fester in the city. Millions of bottles end up in the Congo River and eventually in the Atlantic Ocean. Confronted with waste on such a scale, it would be easy to give up. But I found hope in the heart of Kinshasa from the local church.

Eglise du Christ au Congo (ECC) are Church umbrella group in the DRC with more than 70 denominations. They’ve started a project to clear the plastic waste and put it to good use. Funded by Tearfund, the Turning Plastic Into Green Jobs project does exactly what it says. They have begun to collect, clean and re-use discarded bottles – turning them into useful objects, like floor tiles. The project also provides local jobs and skills training.

So, after my trip to the river of plastic it was heartening to visit ECC’s recycling facilities – situated directly underneath their offices. Projects like this are crucial to tackle existing waste. And it is a growing problem, as more people across the world start to live in cities. That’s why, as well as helping to address issues such as Ebola and encouraging peace and sustainable development in the DRC, Tearfund and our church partners must be at the forefront of vital work like this.

Church clearing the way
It was really encouraging to meet the leaders from ECC, they are deeply Christ-centred people, committed to caring for creation in creative and innovative ways. They speak passionately about playing their part in protecting God’s world. And they are putting that passion into action – demonstrating to the local community that you can live differently and care for the world around you. 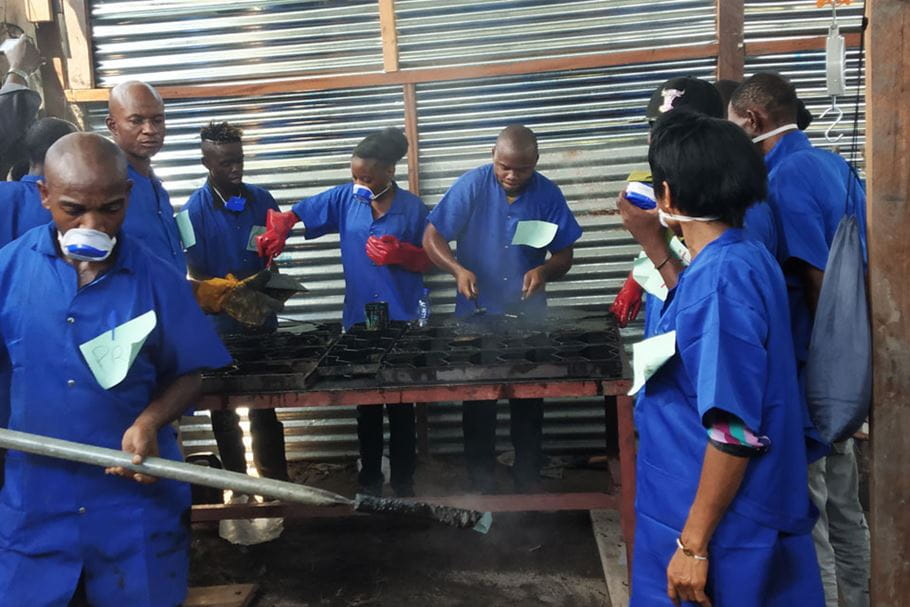 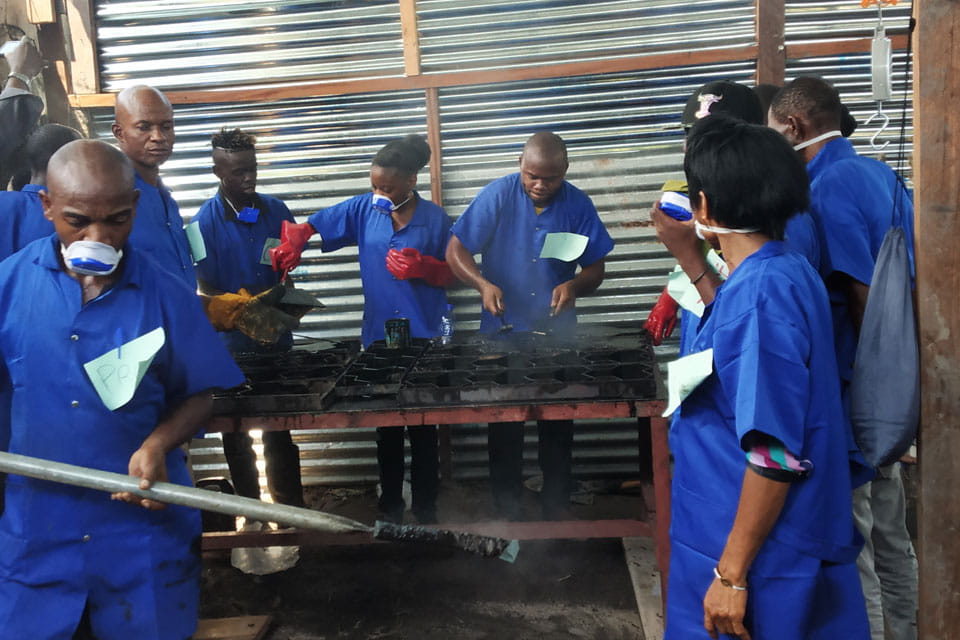 One of Tearfund’s key priorities is economic and environmental sustainability – in short: we are committed to a world where everybody has enough to live on, where our natural environment is kept safe, and where the world’s wealth and resources are more fairly shared.

Together, we can ensure we enjoy and protect God’s beautiful world, and not live in a man-made dustbin.


PLEASE PRAY
Take a moment to picture the river of plastic stretching far away into the distance. It’s easy to become disheartened when you see the extent of a problem like this…

Now picture the ECC green workers clearing away those bottles, patiently turning them into useful, even beautiful items. Pray for them as they take the first steps towards making their home city into Kinshasa the beautiful again.

Is there an evil or a problem that seems too vast to solve? Think and pray, is there a creative first step that you, and others, could be taking?

Learn how you can get involved in Tearfund’s Rubbish Campaign and how you can take our plastic pledge.