Nine years free… but is South Sudan any closer to peace?

This week (9 July), South Sudan – the youngest nation on Earth – marks its ninth anniversary as an independent country. It has spent most of these years embroiled in a deadly civil war. But a new power sharing agreement was formalised earlier this year. Will this be the nation's turning point?

The civil war and ongoing conflicts have pushed many people further into poverty. It has been even worse for those already struggling to access basic needs, such as shelter and food.

Millions of people have been forced to leave their homes after seeing them burnt down and their possessions, cattle and crops looted or destroyed. Many have fled to neighbouring countries, such as Uganda, where they live as refugees. Others have tried to find refuge within South Sudan.

As conflict and devastating flooding continue to take their toll, the harvests are growing smaller, food prices have spiked, and hunger is increasing.

Where the need is greatest
Tearfund has been working in the area which is now South Sudan (formerly part of Sudan) since the 1970s. One of the ways in which we are working with local communities to tackle hunger is through our feeding centres.

Our feeding centres provide life-saving treatment and care to pregnant women, new mothers and their children. In three of the counties that Tearfund works in, we are the only agency running feeding centres. In one of these counties, last year’s dangerous floods wiped away 90 per cent of crops.

These feeding centres are vital in the fight against hunger. And as with all of Tearfund’s programmes, they have been set up to empower communities for the long term. The centres don’t just care for mothers and their children who are suffering from malnutrition, but they give them the training and tools needed to help prevent it.

Mothers are taught about good nutrition. Many go on to plant their own crops, supported through training by Tearfund or our partners. This means they can help their families get all the nutrients they need. Information about hygiene practices, such as handwashing, is shared so their homes can become safer against preventable diseases. And women have a safe space to gather and be heard.

Alec's story
Alec* is 28. She has been forced to move from place to place because of violence – always trying to provide a better life for her family. She initially fled the country in 2013, spending three years in a refugee camp in Uganda before returning home.

Life is hard for Alec and her small children. The place where she lives is prone to flooding. And because there’s a lot of water, it’s a breeding ground for mosquitoes and infectious diseases.

Alec used to collect firewood, which earned her a small income until her young daughter got sick. She gave up the job to care for her. But that pushed the family deeper into poverty.

One of Tearfund’s feeding centres was able to help Alec’s daughter to overcome malnutrition. She’s now much healthier and full of energy. ‘[My] child was not walking but now she is walking alone and can play with her sibling happily,’ says Alec.

‘What I am doing now is that I am cultivating my small kitchen garden to support my diet in my family. Now, my children can go to school and I hope – if all things go on well – they will have a better future.’ 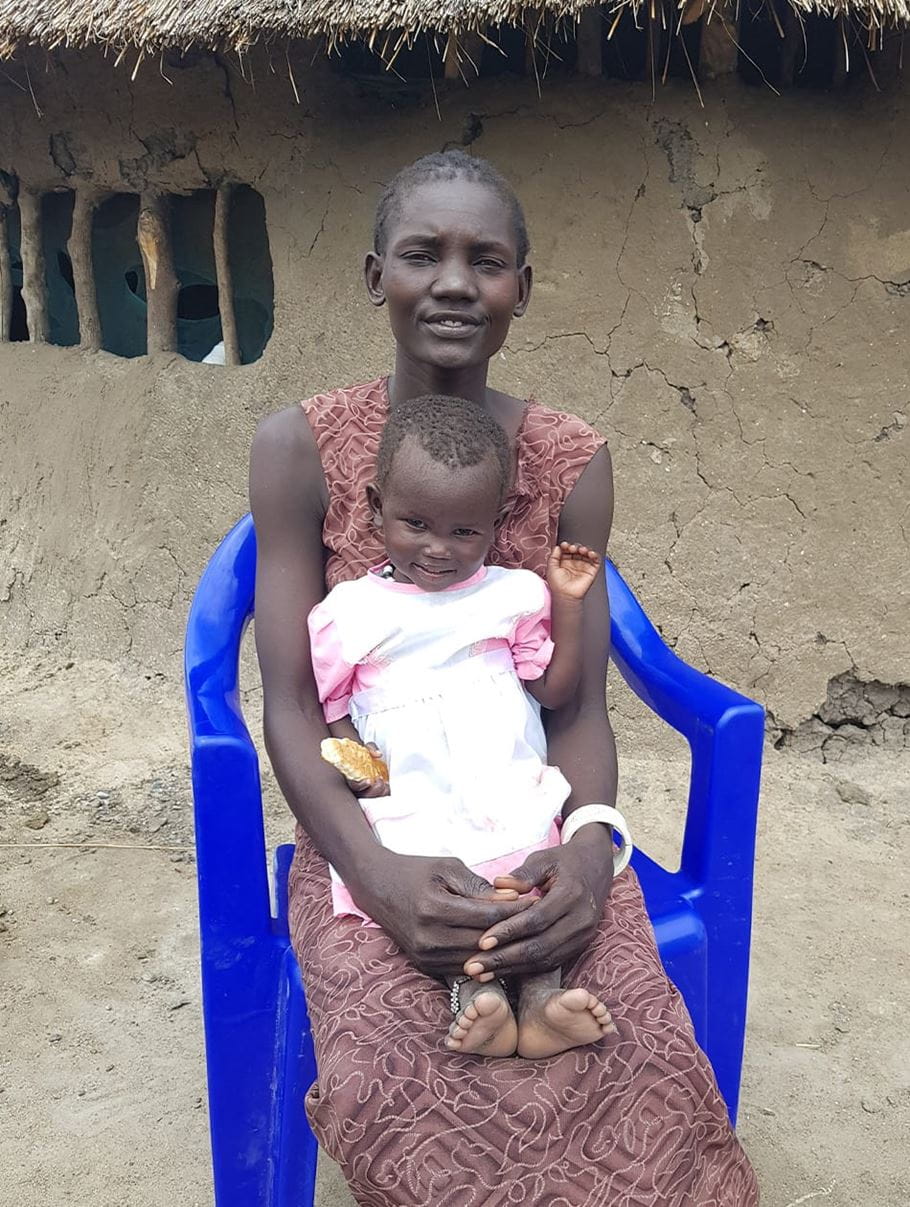 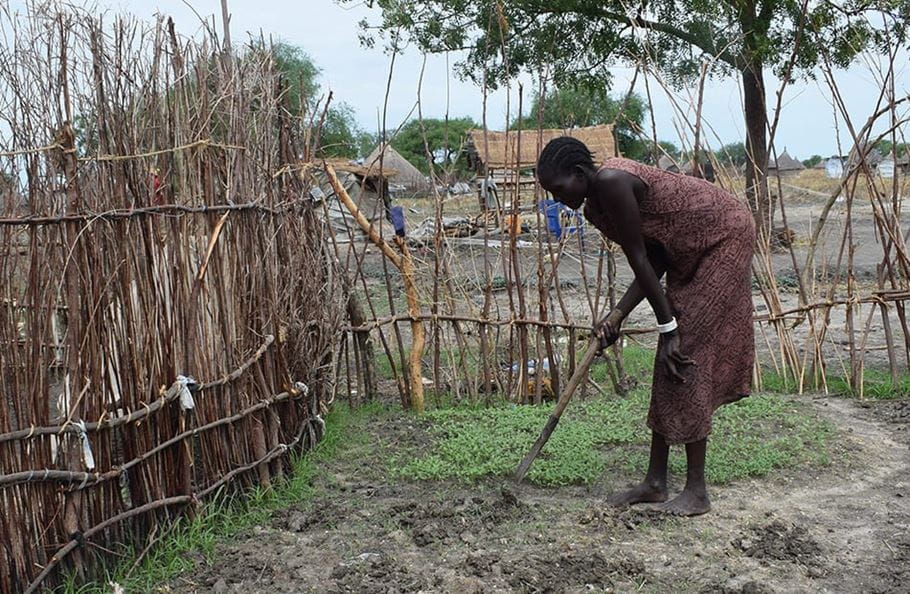 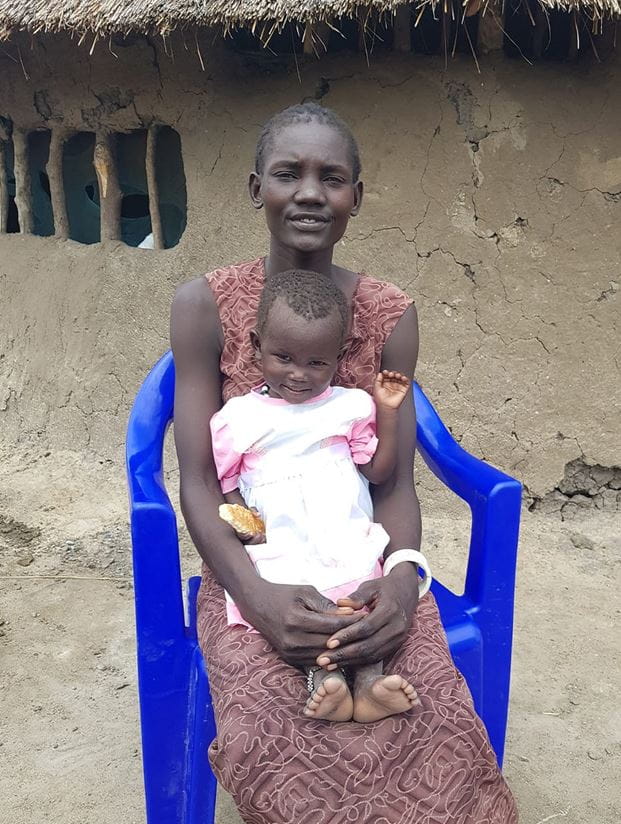 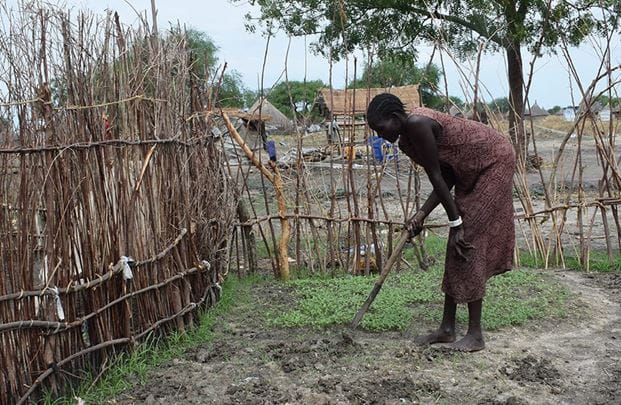 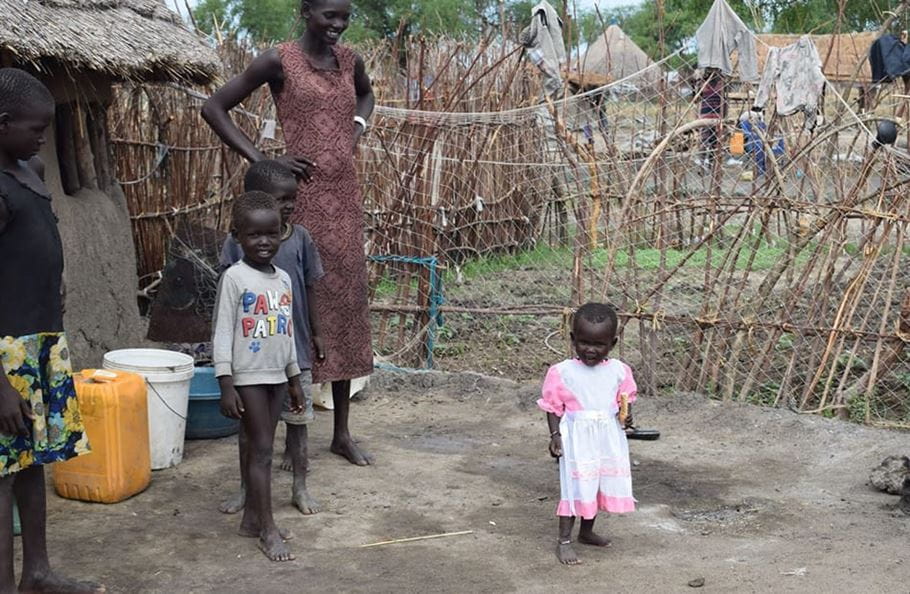 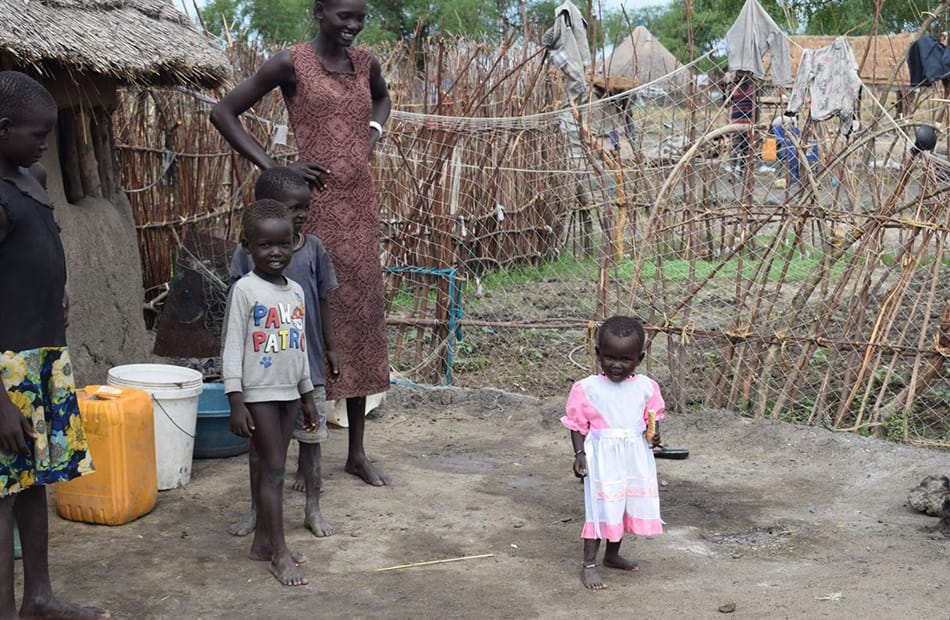 The support and training by one of Tearfund’s feeding centres has helped Alec and her family overcome hunger.

Inspiring others
Through the training and support that Tearfund offers, we encourage participants to share this knowledge with their family and their community. We also give them the tools needed to do this. This means that new skills can be shared widely, and can reach even more people in need.

Grace’s baby was admitted to one of our feeding centres severely malnourished and suffering from diarrhoea. Through treatment he made a full recovery. Our staff have described him as now being a picture of perfect health.

Grace went on to train with Tearfund as a counsellor. She now leads activities that help the centre engage with the local community even more. She is known in the community as a role model after helping many women and children in need. She trains new counsellors, volunteers and group leaders, enabling the centre to reach more new mums that are in need of vital support.

Lucy has also been trained as a counsellor by Tearfund. Before this training she used to voluntarily care for new mothers in her community, looking after them after they gave birth. With healthcare hard to access because of the distance and the lack of a road, Lucy’s role often was more similar to a midwife.

Through training by Tearfund, Lucy began teaching new mothers how they can make sure their new babies get all the nutrients they need.

‘Tearfund has helped our malnourished children to improve their health condition,’ says Lucy, ‘We have some children we know in the community that were badly off and now they have improved their health… I thank Tearfund for having done that.’ 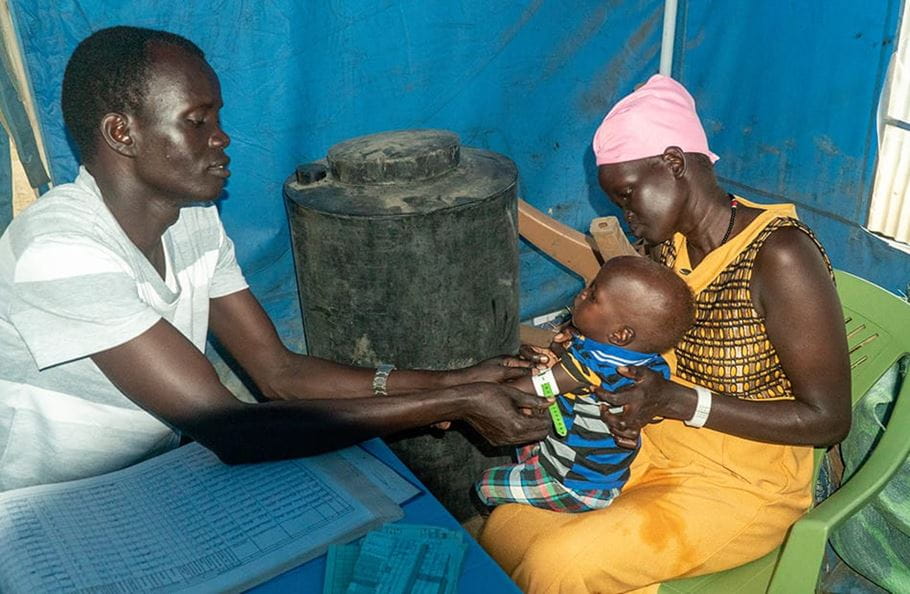 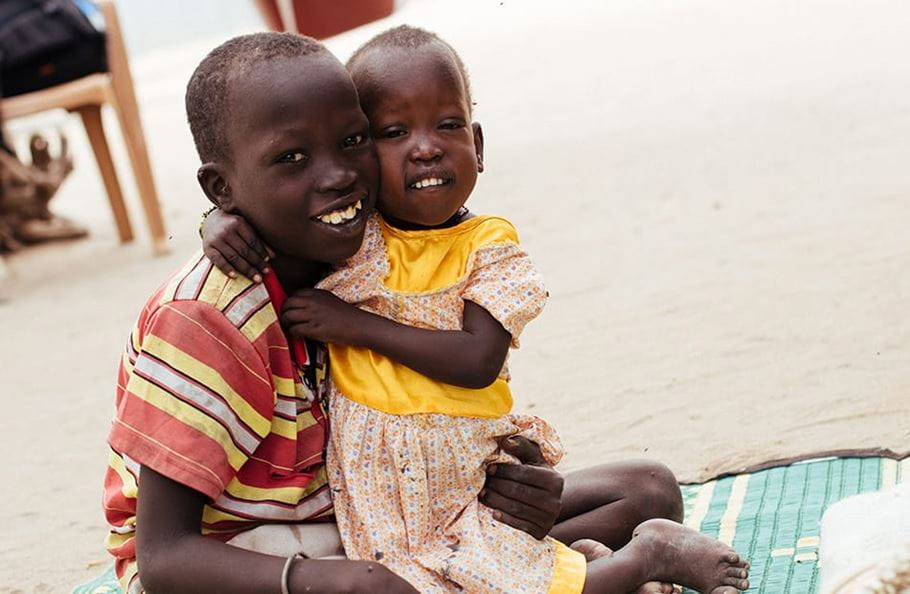 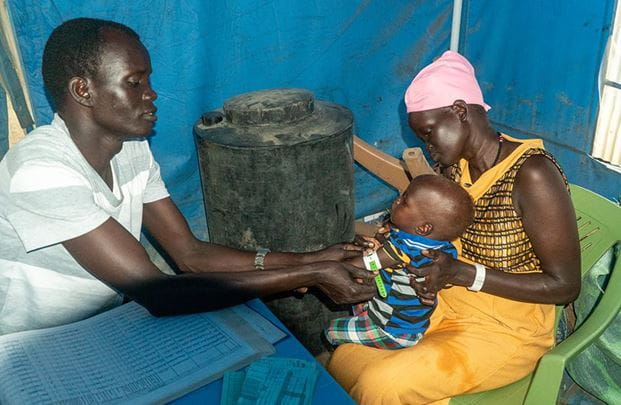 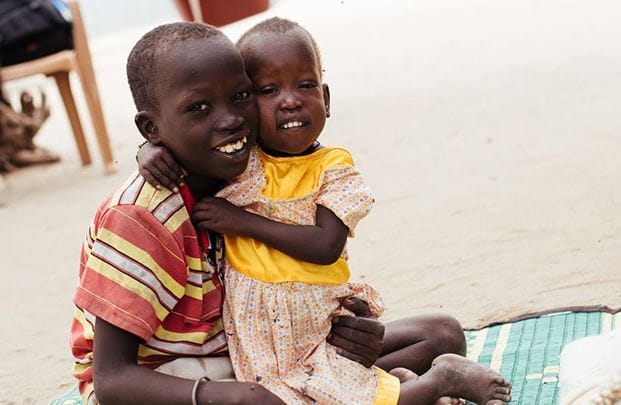 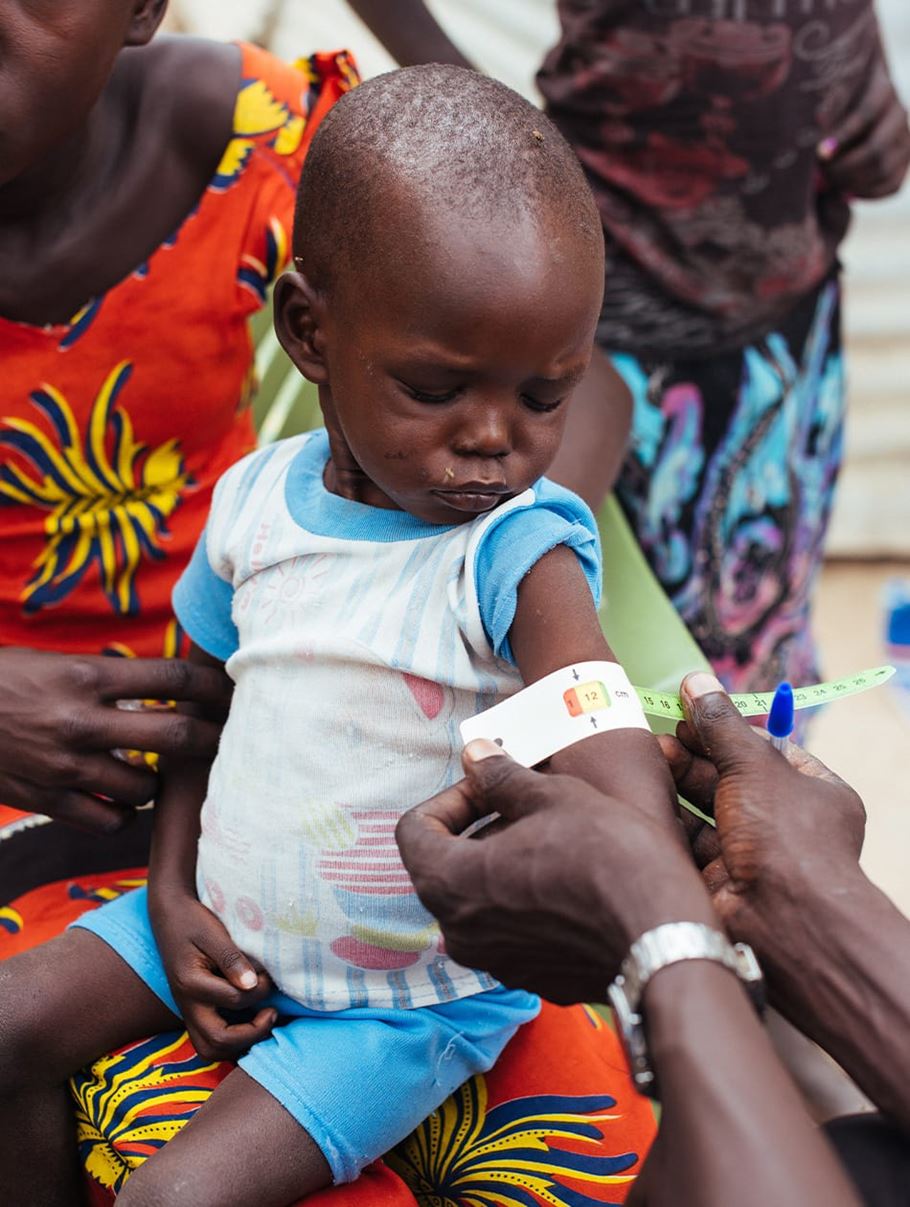 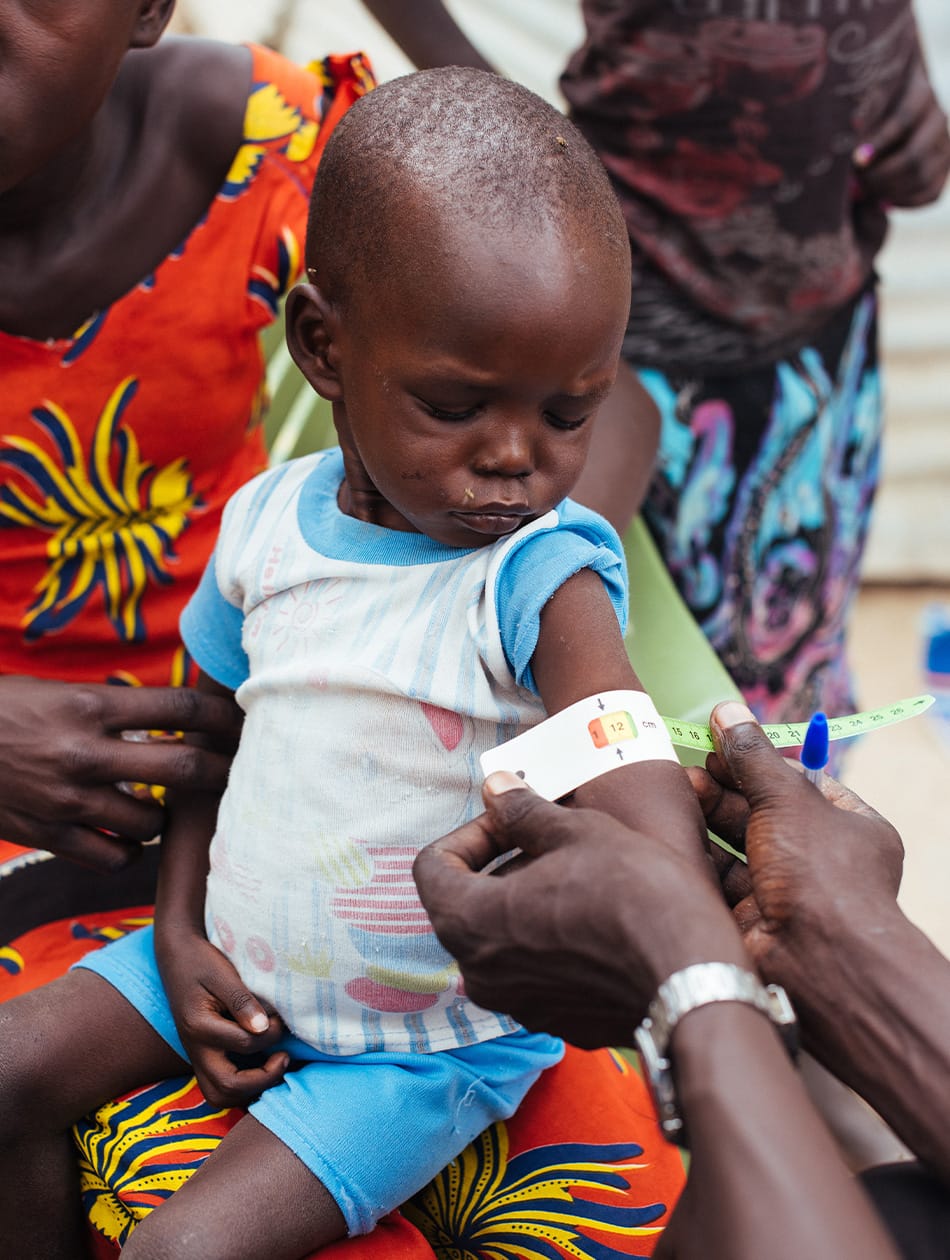 Tearfund’s feeding centres work with communities across South Sudan and are vital to helping end hunger.

A long way to go
The people of South Sudan face many challenges – severe flooding, hunger, and now the coronavirus pandemic. Continued conflict makes this even harder to deal with. The violence hasn’t stopped Tearfund being able to reach people in need, but it does make it a much more challenging environment to work in.

When the new power sharing agreement was formalised earlier this year between South Sudan’s rival political opponents, it was hoped that this would decrease tensions between communities in the region. However, violence has been on the rise since March, with community conflicts centering around cattle raiding and retribution for previous attacks.

‘As we celebrate nine years into our independence, we remember the struggles, sacrifices and pains that led to this day, and what happened later when clashes killed 400 hundred people and millions were forced out of their homes,’ says Anthony Rama, Tearfund’s Country Director for South Sudan.

‘We don’t want to lose hope, but rather look ahead and work to end the cycle of violence and poverty. To work together for peace and a better future. Recently, steps have been made towards an inclusive leadership but we still have a long way to go.

‘The need is great in South Sudan, but we believe that God has brought us this far, and has great plans for our nation. Please continue to pray with us – and thank you for your ongoing support.’

We have recently launched an Appeal to support the life-saving work our feeding centres are doing in South Sudan. If you feel led, please consider giving so this important work can continue.