Find out more about projects that have been funded by the Scottish Government. 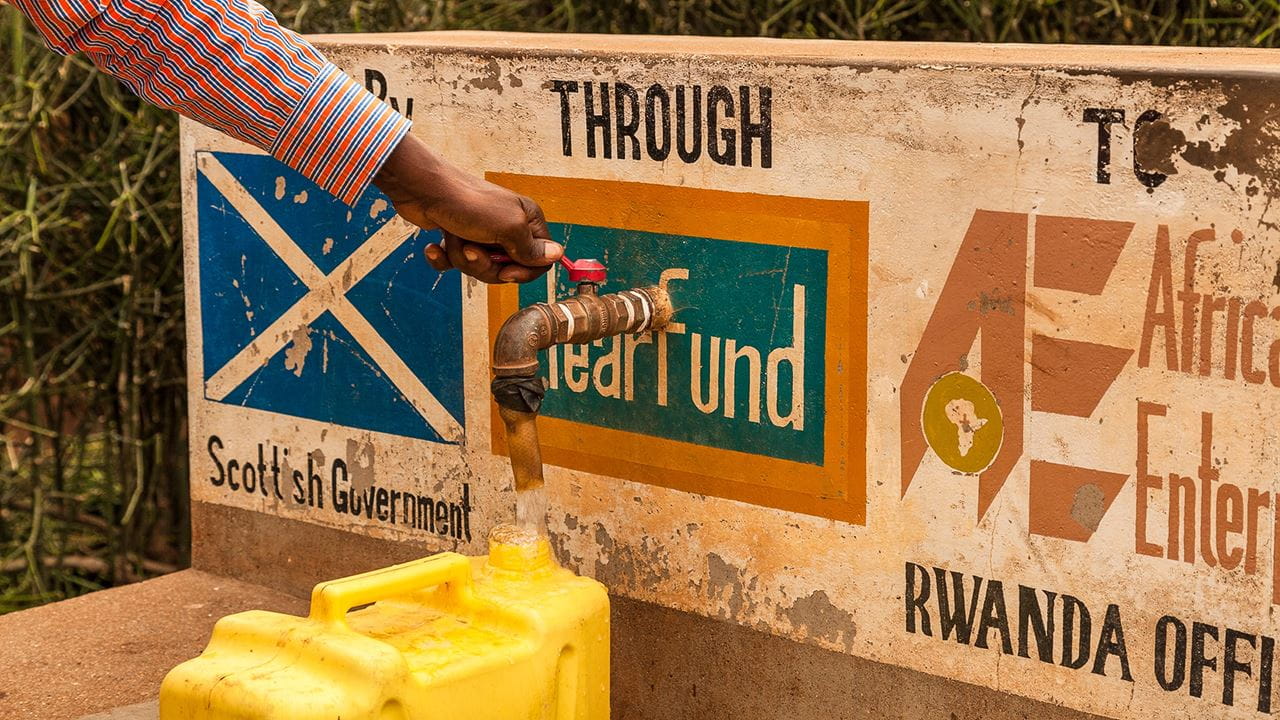 Since the inception of the Scottish International Development fund in 2005, Tearfund has been supported by the Scottish Government to help some of the most vulnerable communities across the world to lift themselves out of poverty.

These projects have enabled us to provide shelter, food and clean water to people going through some of the worst crises our world has seen in the last 10 years.

Economic and political challenges in Venezuela have led to social and economic collapse. The UN estimates that 3 million Venezuelans have left the country desperate due to hunger and lack of medicines and many of them have gone to nearby Colombia.
The city of Barranquilla on the Caribbean coast has the largest number of Venezuelan migrants in Colombia and more arrive every day, often with nothing.
With support from the Scottish Government's Humanitarian Emergency Fund, Tearfund and local church partner, CORSOC, are supporting newly migrated families with much needed food and basic household items to enable them to store clean water, prepare food and meet their hygiene needs. 500 families (around 3,800 people) are receiving assistance.

The Scottish Government has stepped in to release funding from its Humanitarian Emergency Fund, to support Tearfund’s work in Ethiopia.

Our world is facing many different issues and challenges at the moment. In East Africa, locusts have devastated crops, and farmers are struggling to survive because their primary income source has been wiped away. The emergency funding will enable our partner Friendship Support Association (FSA), to support over 5,000 people in the Afar region of Ethiopia to buy the food that they so desperately need right now.

The emergency funding will also enable FSA to raise awareness of good hygiene practises – like washing hands regularly with soap and water – to protect against diseases and infections like the coronavirus (COVID-19).

Mali is the 8th largest country in Africa but it is one of the least developed countries in the world. It is positioned 182 out of 189 countries on the Human Development Index (HDI) and it is estimated that over 5.2 million people require humanitarian assistance.
Conflict broke out in Jan 2012 and has become steadily worse since then. The effects of conflict reached a critical level in 2018 with a large amount of people leaving their homes and livelihoods and moving to other areas of the country to escape.
The crisis is largely unreported and unnoticed by the world but the Scottish Government, through the Humanitarian Emergency Fund, provided funds to help those in most need. Tearfund received a grant of £100,000 to support internally displaced people in the region of Mopti with life saving assistance. A needs assessment in the local area highlighted that 98% of people needed food, 95% needed healthcare and 54% needed water.
Tearfund, through local partner ODES, has been supporting 340 families to buy essential food and kitchen equipment, as well as providing mosquito nets, hygiene kits and promoting hygiene awareness to reduce the incidence of disease.

South Sudan gained statehood in 2011 but in December 2013, violent conflict erupted between the government and armed opposition groups and the conflict is now in its sixth year. It has resulted in massive population displacement and has caused severe disruption to livelihoods, trade and access to humanitarian assistance. Almost 2.5 million people have fled to neighbouring countries and more than 7 million people within South Sudan are in need of humanitarian assistance.
In response to further deterioration of the situation in 2018, the Scottish Government gave Tearfund a grant of £100,000 to support some of the most vulnerable people in the Greater Mundri area with food assistance to help them during the lean season. A food security needs assessment of the area revealed that 83% of the community members were food insecure (skipping meals or eating one meal a day) and inadequate intake of food had caused malnutrition, lowering resistance to disease and making the affected people highly vulnerable to diseases.
Working through local partner, SEM, Tearfund has been supporting some of the most vulnerable families in the area such as people living with disabilities, families with children under 5 and female-headed and child-headed families. By providing food to these families, Tearfund has been able to decrease the need for them to turn to negative coping strategies such as skipping meals or selling assets for food. 500 families (around 4,500 people) have benefited.

The Democratic Republic of Congo (DRC) is a vast country with a population of 79 million people and with immense economic resources, however, it has suffered from decades of civil war and for the last 20 years has been a complex emergency situation. Instability in the region has led to widespread poverty, accompanied by violence which has divided communities and displaced families.
In response to a particularly fierce outburst of fighting in early 2018, the Scottish Government released money to help alleviate suffering and Tearfund was given a grant of £100,000 to provide clean and safe water to almost 45,000 people in Maniema who are at high risk of being affected by cholera outbreak.
Tearfund has been helping communities construct 10 drinking water points and has been training local community volunteers to manage them. In addition, Tearfund has distributed water kits to 6,195 households to enable them to treat their drinking water until the new water points are available.

Tearfund received funding in 2017, through the Scottish Government's Humanitarian Emergency Relief Fund, to respond to flooding in Nepal.
Following the devastating floods in Nepal in August 2017, the Scottish Government gave Tearfund £100,000 to implement an early recovery project in Banke District, one of the worst hit districts in the country.
The project supported 240 households to rebuild their homes and provided agricultural tools, seeds and training to beneficiaries to enable them to get back to their land and to start farming again.

Scottish Government funding has also had a significant focus on helping people in the longer term. These projects are helping communities to respond to a changing climate, gain access to safe and clean water, protect their children, and find opportunities to improve their livelihoods so that they and their families can flourish. Tearfund is currently implementing development projects in Rwanda and Malawi.

The Scottish Government is funding Tearfund and its partners to work with communities in the Southern Province of Rwanda until 2022 to support them to improve their agricultural productivity and to help them improve the value of what they get from sales of their produce. It has also encouraged community members to participate in self help groups which should enable them to increase their access to savings and loans as well as to work together to develop their communities.

The project started in October 2017 and in the first 18 months alone, 838 self help groups have been established and trained with almost 15,000 participants, the majority of whom are women. It hopes to build on the work of a previous successful project in the country to improve the lives of 30,000 people.

Tearfund has been working with communities in Malawi, with Scottish Government support, since 2005. This funding has enabled us to support many projects.

In conjunction with our partner, LISAP, Tearfund has been supporting communities in rural Chitipa to protect girls and boys from harmful cultural practices that deny them their rights to an education. The project has been working in this area since April 2015, following a similar successful project in nearby Karonga district.
To date, 139 communities in Chitipa have implemented bylaws to protect children from child labour and early child marriage and over 12,000 people have directly benefited from project activities.
More children are attending school, with attendance increasing from 70% in 2015 to 90% in 2018. Primary school completion rates have increased from 87% to 89%.
Almost 2,200 adults have started new businesses or improved existing ones through participation in self help groups, improving their incomes and enabling families to financially support their children to continue attending school.
One of the mother and father groups that was trained as child protection agents has reflected on the impact the project has made so far: "As a Mother and Father Group, we appreciate the responsibility bestowed upon us by the community to contribute towards child protection through the enforcement of bylaws and monitoring school attendance. The Girls and Boys Empowerment Project has empowered us to continuously make sure that children are in school and that parents and guardians take full responsibility for their children so that they succeed in education. We have noticed change in the students, absenteeism has reduced which improves educational achievements for students."

Since April 2015, over 9,500 people have directly benefited (and over 42,000 people have indirectly benefited) from Tearfund's project with local partner, Ministry of Hope, which aims to reduce poverty and extreme hunger for communities in Dowa District.
By implementing agricultural techniques learned in training, households have seen their harvest of maize and groundnuts increase almost five-fold, giving them not only enough food to feed themselves and their families, but they also have food left over to sell for additional income.
By the third year of the project, food security had increased in the project area and 45% of people could afford to eat at least 3 meals a day during the lead period (pre-harvest), up from 17% at the start of the project.
People in this community have also been participating in self help groups which have allowed them to access loans to start new businesses or expand existing ones allowing them to diversify their livelihoods, giving them more resilience for difficult times.
As well as reporting increased incomes, members also reported that social cohesion has improved as a result of community members participating in self-help groups, saying that it has led them to support each other more and to look out for vulnerable people in their communities.
Environmental conservation has been an important element of the project and over 8,800 farmers have been trained in natural resources management, planting over 1.3m trees.

Tearfund was delighted to be awarded one of the first Scottish Government Climate Justice Innovation grants. This grant enables us to research whether conservation agricultural techniques, combined with locally produced fertiliser, can protect Malawian farmers from the devastating effects of the Fall Armyworm.

Fall Armyworm poses a major threat to food security and agricultural trade. Tearfund's partner SOLDEV is working with 300 farmers in Rhumpi district, with support from the University of Lilongwe and the Lunyangwa research station with the hope that the results can influence national policy on how to deal with this pest in a way that also protects the environment.

The project started in November 2017 and continued until March 2020. Early indications from the research support the theory that a combination of conservation agriculture and using treated seeds not only increases agricultural yields but also offers some form of protection against Fall Armyworm.