A volcanic eruption has left many people homeless in the city of Goma, DRC – and there are fears of a second eruption 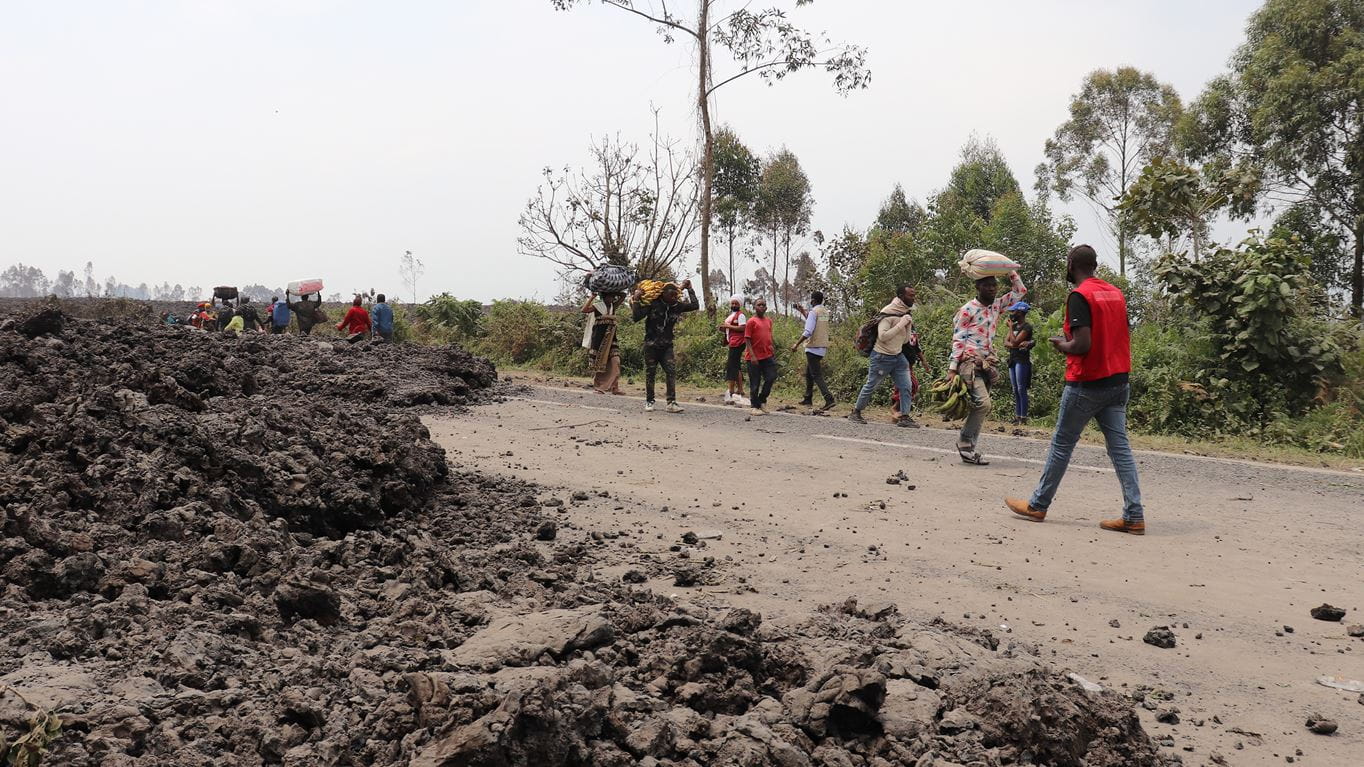 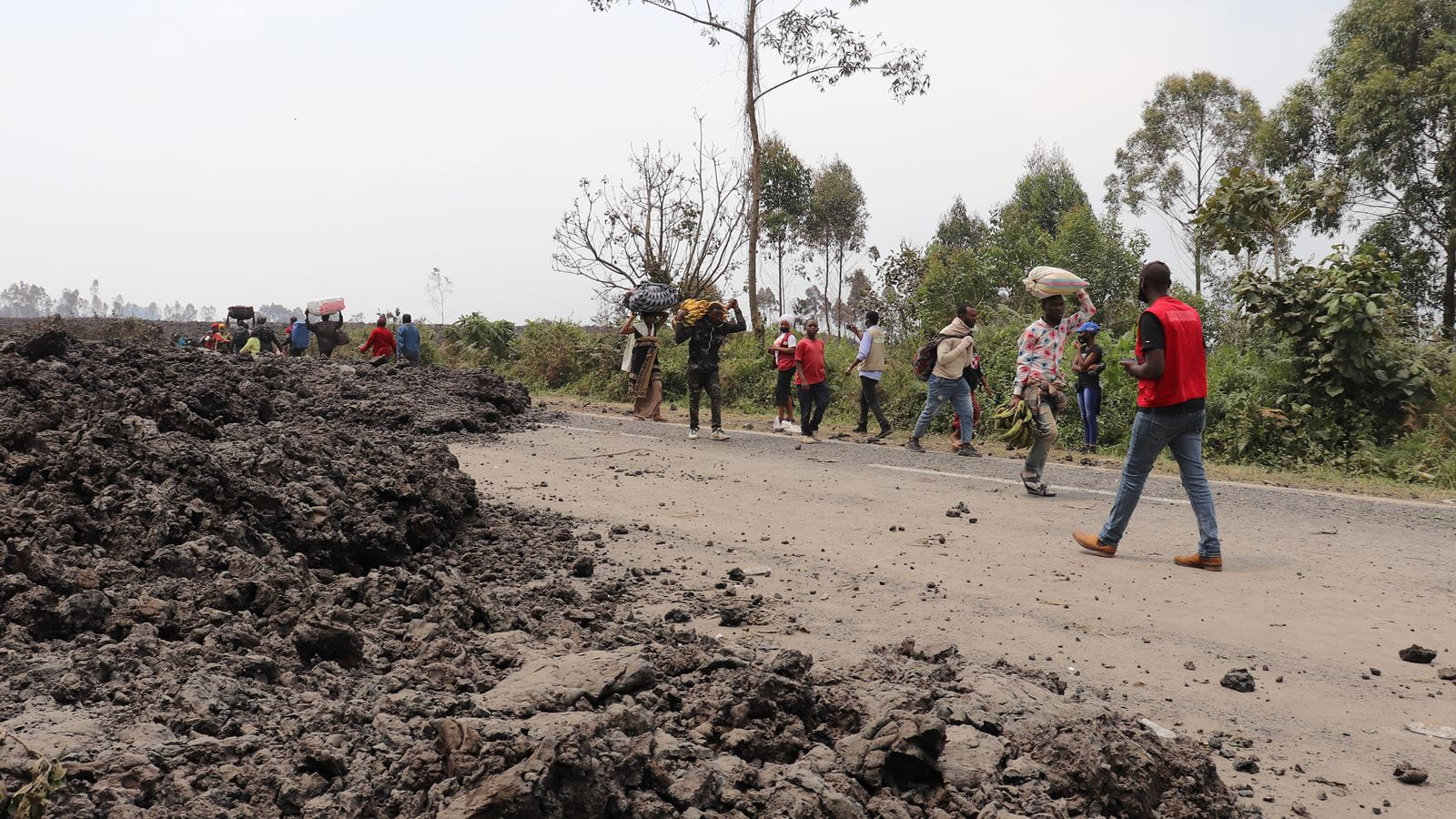 Thousands of people have lost their homes and businesses after a volcano erupted in the Democratic Republic of Congo (DRC), in the evening of Saturday 22 May.

The country’s government urged residents to evacuate. Panicked families fled their homes on foot with all they could carry, as lava flowed from Mount Nyiragongo near the eastern city of Goma.

‘It was 9pm, we left Goma by foot, and we reached Sake at 3am,’ says Raoul*, who fled with his wife and two children. ‘My home is in Goma, but my house was destroyed. I have nowhere to go. I don’t know what to do. God can support us.’

On Thursday 27 May a second alert was raised and local authorities ordered an evacuation of large parts of Goma. Based on the latest geological data, there are fears the Nyiragongo volcano will erupt again.

According to the authorities, 32 people died in incidents linked to Saturday’s eruption, including seven people killed by lava and five asphyxiated by gases. Others were killed in the rush to escape.

The lava flowed through some very poor and vulnerable communities, many of which include people who have already fled violence in other parts of the country.

The full extent of the damage is still unclear, but it’s estimated 4,500 homes were lost due to the lava, and further homes were damaged or destroyed by heavy earth tremors.

After the second evacuation alert was issued early on Thursday morning, hundreds of thousands of people fled to the Sake area or over the border to Rwanda. Some people were able to find shelter with friends or relatives, but many arrived knowing no one and having nothing. This is fast becoming a major humanitarian crisis.

‘The tremors have significantly reduced since yesterday, but people are scared of another eruption. Some are sleeping outside, because the walls of their homes have cracked from the tremors,’ says Hebdavi Muhindo, who leads Tearfund’s work in the DRC and lives in Goma.

‘The northern part of town has had its main water supply cut by the lava, resulting in an estimated 500,000 people without a source of safe water. Those who are displaced are in need of shelter, food and safe water,’ says Hebdavi.

A church pastor from Sake, which is 23km from Goma, told us: ‘So many people came to us and we were wondering how we were going to receive and shelter all these people. So we decided to open the church to shelter them. We asked our congregation to help, but we are in urgent need of food, water, medicine for those who are sick, we need latrines and other sanitation facilities.’

Tearfund staff and our partners’ priority is to meet the needs of people who have lost everything. Our immediate focus is helping people in Sake have access to safe water and sanitation as well as toilets. We are also planning to give them cash to buy life’s essentials, such as food and cooking utensils.

In Rwanda, people continue to cross the border by their thousands.

Emmanual Murangira who leads our work in Rwanda, went with a team to assess the needs of the people there. ‘We could only estimate how many people we saw crossing the border, there were so many. Some in buses, some walking. People asked us for water and food,’ says Emmanuel.

People are staying in makeshift camps, and there is a fear of an outbreak of cholera as there is no running water. Coronavirus is also a threat. The Rwanda team is also providing toilets, blankets and sanitary pads for women.